Nuance launches Nina, a speech to text SDK that can understand who is speaking 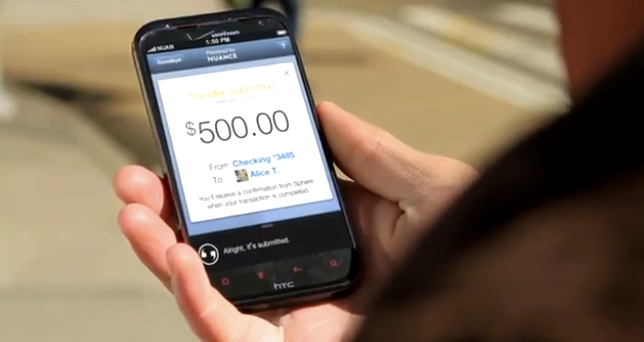 Communication company Nuance launched a new personal assistant SDK this morning, called “Nina”. Nina has a focus on customer service, and it can be embedded in any iOS or Android app to provide a way for the customer to speak commands. Calling itself “a major competitive differentiator,” Nina understands who is speaking along with any rattled off commands. As you can see in the demo video below, a user can ask more personal questions, like banking- and insurance-related inquiries, without needing to enter a password. Nina simply picks up and identifies the user’s voice.

Nina uses the same Nuance-backend speech recognition powering Apple’s voice personal assistant Siri that is available on the iPhone 4S and the new iPad (iOS 6 beta). Siri currently does not have the option to be embedded in apps, and it really only focuses on offering services from Apple’s built-in apps like Calendar, Messages, and Phone, whereas Nina is found inside the app.

Nuance Nina is available to developers in the United States, United Kingdom, and in Australian English, with additional language plans setup for later this year. Nina will first launch in the USAA app, which currently makes banking easier for members of the military and their families, through a pilot sometime this month. An official version featuring Nina will be announced early next year.

Nuance is the tech behind a slew of communication services over the years, offering apps like Dragon Express for Mac and Dragon Dictate, and there were rumors at one point last year that Apple was going to buy Nuance. However, that day never came. At any rate, Nina looks like a great tool for customer service apps. Developers can get more information here, when it is released. [Nuance]

Nuance also announced that USAA, a leading financial services provider that serves members of the U.S. military, veterans and their families, has adopted the virtual assistant for use within its popular mobile app. A pilot is planned for August and the functionality will launch to all USAA members early next year.

“USAA’s innovative solutions are designed to make life easier for our highly mobile military service members, and increasingly for all members who now expect to get things done when, where and how they want.” said Neff Hudson, assistant vice president of emerging channels for USAA. “We believe that the virtual assistant has tremendous potential to make it simpler, faster and more satisfying for our members to manage their financial affairs on their mobile devices.”

Nina is significant because it is the first virtual assistant customer service app to incorporate both speech recognition and voice biometrics into a single integrated solution. Nina is also the first solution that provides an open software development kit (SDK) to support the rapid integration of virtual assistant capabilities into existing mobile applications. In addition, Nina is the first to allow organizations to brand their own virtual assistant persona, including the visual appearance and implementation of optional custom TTS voices.

“Nina is a watershed innovation for the automated customer service industry, not only because it brings the virtual assistant directly into an app, but because it raises the bar through its level of interactive dialog and language understanding,” said Robert Weideman, executive vice president and general manager of the Nuance Enterprise Division. “Nina provides our customers a major competitive differentiator by enabling more successful self-service through their mobile apps. We are especially pleased to further our partnership with USAA, a company known for its innovation and approach to delivering a premier mobile customer service experience to its members.”

The Nina Virtual Assistant for customer service is comprised of:

The Nina Virtual Assistant SDK and cloud service is available now from Nuance in US, UK and Australian English, with additional languages to be made available later this year. Nuance provides professional services in support of Nina and virtual assistant implementations.