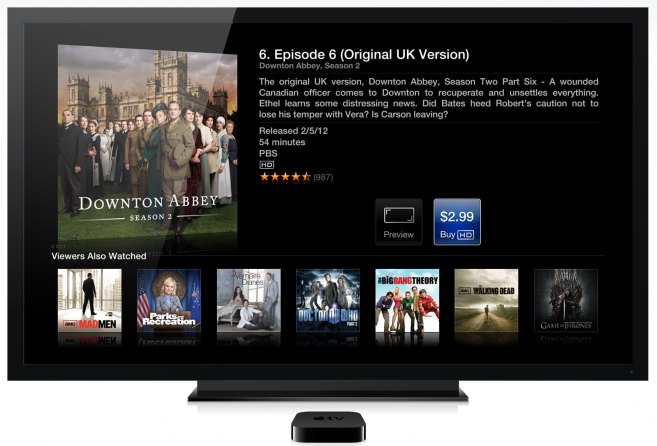 Going away from the constant rumors that Apple is building its own TV set, The Wall Street Journal reported yesterday evening that Apple is in talks with cable television operators to use an Apple TV device as a set-top-box. Adding to yesterday’s report, the publication shared another note today with more details of Apple’s vision for the new device. This evening’s report mentions that Apple is looking to introduce a feature that will allow users to view a TV show at any time—even minutes after it started. iCloud DVR has a nice ring to it.

The Cupertino, Calif.-based company proposes giving viewers the ability to start any show at any time through a digital-video recorder that would store TV shows on the Internet. Viewers even could start a show minutes after it has begun. Time Warner Cable Inc. offers a limited version of this feature called Start Over.

Furthermore, Apple is said to be working on a redesigned interface for the set-top box that is more in-line with the icon interface of the iPad. Users have begun to express their concern in recent months over the Apple TV’s UI, claiming the menus are confusing and calling the interface clunky. Social media features may also be added which would allow users to easily share thoughts on TV shows and movies.

An iPad-like UI could make things easier for customers, as most have become accustomed to iOS’ easy-to-navigate UI. Customers have an understanding of how apps work, making it easy for them to launch, for instance, a CBS “channel.” Apple would also presumably tie some awesome remote features into its existing iOS lineup. The rumored iPad mini sounds perfect.

Apple is still far away from making a deal, the report noted. The Cupertino-based company still has many hurdles left, including getting the actual agreements in place, and Apple is said to be talking to the operators to lay out what the new set-top box can do.

Many of you already know the same story for over a year now is that Apple is working on its own TV set. Prominent Apple analysts pegged the device to land as early as 2013, and they have called it as ground breaking as when the iPhone launched in 2007.

Sales for Apple’s current $99 Apple TV offering have been on the up-and-up. As of the company’s latest earnings call, Apple sold 4 million Apple TV units this year alone. Chief Executive Tim Cook noted Apple will “continue to pull the string and see where [the Apple TV] takes them,” which is certainly an interesting comment, but Cook continued with the same song and dance. He said Apple TV would remain in the company’s interest.

It is worth noting The Wall Street Journal also reported in December that Apple was discussing a voice-powered TV featuring enhanced AirPlay and an iCloud DVR service (which was again mentioned today).

A cheap set-top box that operators make available seems like the better option than a full-fledged television. What do you think?