AT&T’s FaceTime blockade: Does the FCC need to get involved again? Public Knowledge thinks so 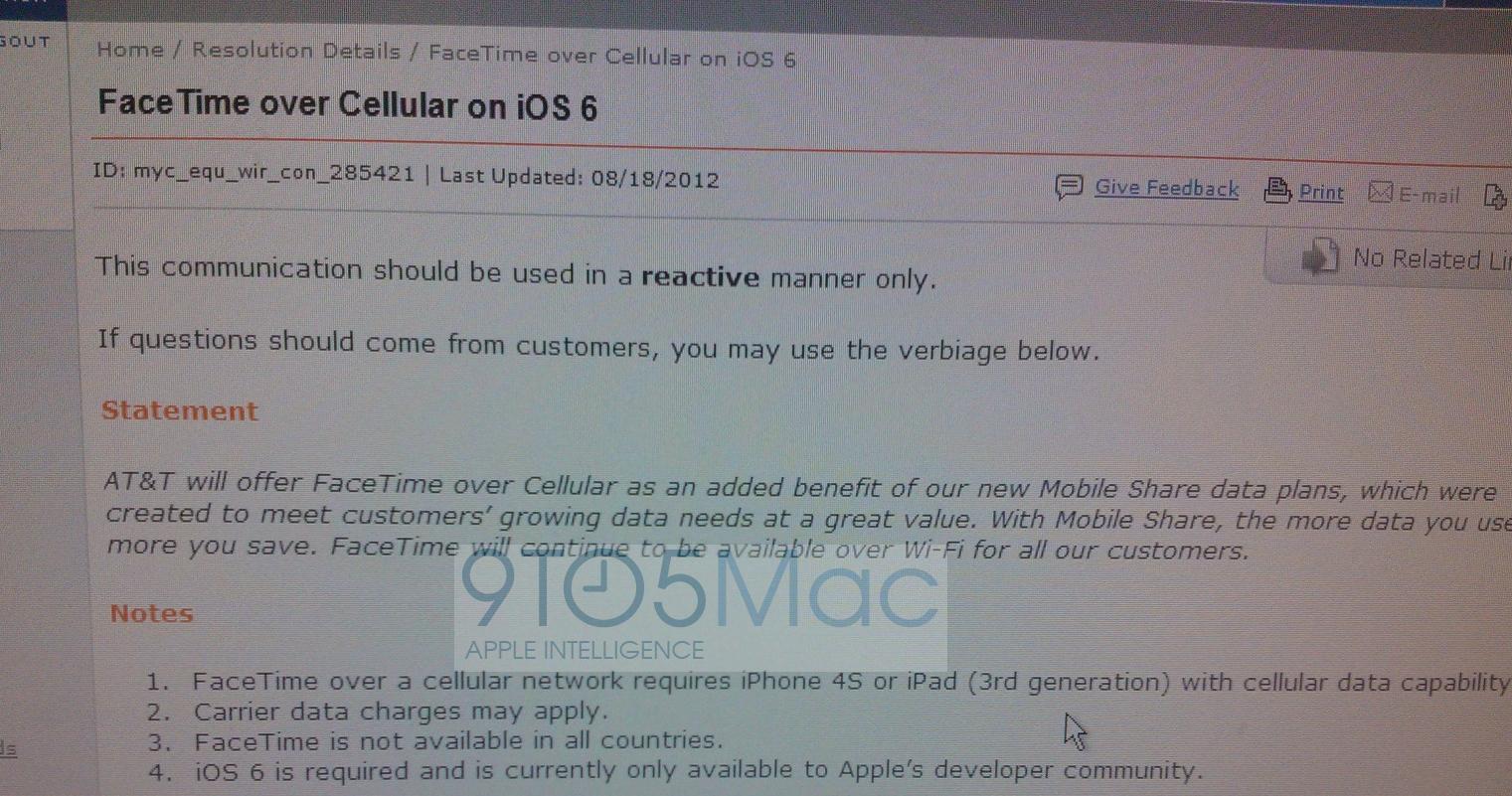 AT&T recently revealed to us that they were going to block Apple’s built-in FaceTime over cellular unless users sign up for an expensive Mobile Share plan. Does this reek of loyal customer exploitation?

“By blocking FaceTime for many of its customers, AT&T is violating the FCC’s Open Internet rules. These rules state that mobile providers shall not ‘block applications that compete with the provider’s voice or video telephony services.’ Although carriers are permitted to engage in ‘reasonable network management,’ there is no technical reason why one data plan should be able to access FaceTime, and another not.

“‘Over-the-top’ communications services like FaceTime are a threat to carriers’ revenue, but they should respond by competing with these services and not by engaging in discriminatory behavior.”

Sure, FaceTime over cellular is a “new feature” of iOS 6, but so is Apple’s new Maps Turn-by-turn navigation.  So is the PassBook Application and Photo Streams.  They all will use more data. What is stopping AT&T from blocking those too?

What justification can AT&T give for such a move when it allows competing video chat apps to be available over its network? The most popular video chatting app, Microsoft’s Skype, has been available on the iPhone over 3G since AT&T allowed it –with some significant coaxing – from the FCC in 2009.

But with the FCC not only investigating AT&T and Apple’s Google Voice ban — but wireless industry competition overall — AT&T has miraculously had a change of heart and will now allow iPhone Skype traffic over 3G:

Previously, VoIP applications on iPhone were enabled for Wi-Fi connectivity…AT&T this afternoon informed Apple Inc. and the FCC of its decision. In late summer, AT&T said it was taking a fresh look at VoIP capabilities on iPhone for use on AT&T’s 3G network, consistent with its regular review of device features and capabilities to ensure attractive options for consumers.

Skype added the ability to video chat over 3G in 2010. We estimated the data usage to be at 3.4Mb/minute at the time. Many other video chatting apps on the iPhone and iPad exist including:  Fring, Google Plus (which also works native on Android phones FWIW), ooVoo and many others.

1. As mentioned above, Skype and other Video chatting applications aren’t blocked by AT&T and they use just as much data.

2. AT&T has moved just about all of its customers over to tiered data plans and even those who are left on “Unlimited Plans” are still subject to throttling that would eliminate the ability to use video chatting applications. Users are paying for data that they use.

3. FaceTime over Wifi uses about 3 Megabytes per minute of talk.  For someone to use up a 3GB monthly allotment of data, they would need to FaceTime video chat for almost 17 hours (and the data usage over 3G would likely be less taxing). Netflix, Hulu, Crackle, Amazon Video all use roughly this amount of data without regulation from AT&T.

As for the competition, Sprint already announced that it will not hinder FaceTime over cellular, and Verizon is being forced not to mess with it because of a Net Neutrality agreement.

Below is Mark and I completing a 3G FaceTime over 2 years ago on AT&T’s network with a simple jailbreak on an iPhone 4.

This is an updated story from a previous post that looked at Apple’s imposed FaceTime limitation on iPhone 4 and iPad 2 , not AT&T’s.