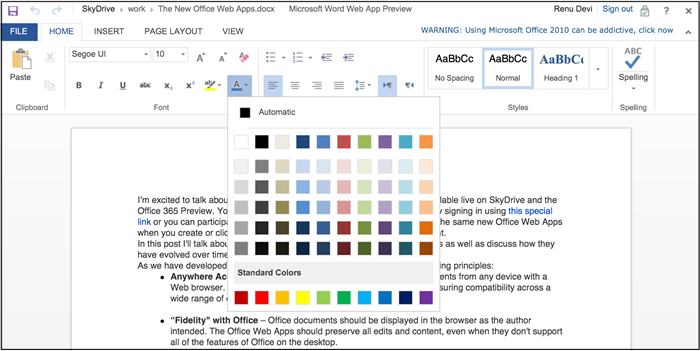 Microsoft announced on its Office Web Apps blog this afternoon that its preview platform gained touch-enabled support on Safari for iOS to make it easier to navigate while on the go. Microsoft said OWA is sporting the same new interface that was introduced a week ago—except its been updated with a “focus on scenarios and experiences on a touch device.” Scenarios include zooming in and out of documents with two fingers, easily tapping to place an insertion point between words to begin typing, and selecting multiple words to easily edit.

Making something easy to touch is dependent on the size of the target. Many user interface elements such as the ribbon controls and context menus fell well below the “touchable” size limits defined by Windows 8 and Microsoft Office…All of these elements have been made easy to touch in the new Office Web Apps.  Great care was taken to balance the increase in physical size of the UI with preserving as much real estate as possible for the actual document content.

For those unfamiliar with OWA, it allows SkyDrive, Hotmail, Docs.com, and Facebook Messages users to reach their documents from any web browser through web-based versions of Word, Excel, PowerPoint, and One Note. If you constantly edit documents with colleagues, it may be the solution for you. [OWA Preview via Engadget]