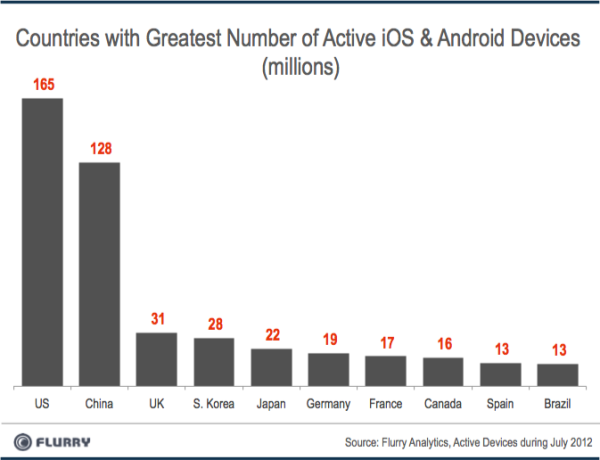 Mobile analytics firm Flurry published a new report today asserting iOS and Android handsets have experienced adoption at such a supersonic speed that their growth rate has now eclipsed all consumer technology in history.

The rate of iOS and Android device adoption has surpassed that of any consumer technology in history.  Compared to recent technologies, smart device adoption is being adopted 10X faster than that of the 80s PC revolution, 2X faster than that of 90s Internet Boom and 3X faster than that of recent social network adoption.  Five years into the smart device growth curve, expansion of this new technology is rapidly expanding beyond early adopter markets such as such as North America and Western Europe, creating a true worldwide addressable market.  Overall, Flurry estimates that there were over 640 million iOS and Android devices in use during the month of July 2012.

Smartphones making headway as they spread worldwide is nothing new, but their history-making adoption rate is certainly notable. The report illustrated countries with the greatest number of device activations as well as the fasting growing markets. The results indicated the United States sits at No. 1 with 165 million iOS and Android handset activations for July, but China experienced a leading 401 percent activation growth during the same period.

Go to Flurry’s blog for additional statistics and charts. The firm used data from more than 200,000 tracked applications, running on more than 640 million devices worldwide for July alone, to achieve a self-proclaimed 90 percent reliability.