T-Mobile wants its staff to sell against the iPhone on Sept. 21 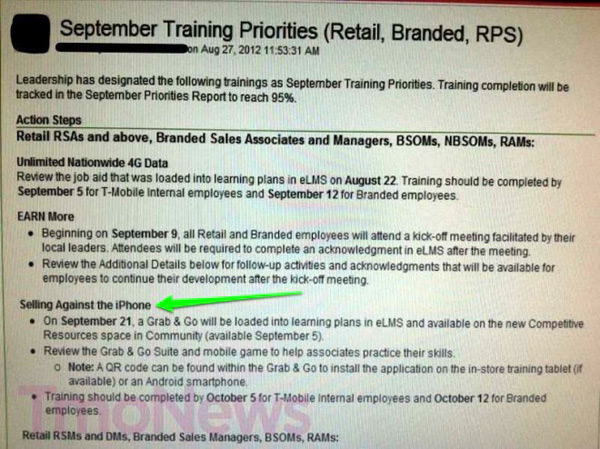 In what should not be a surprise to anyone, it looks like T-Mobile won’t carry Apple’s next-generation iPhone. In a memo to employees, leaked by TmoNews, T-Mobile is encouraging its retail staff to begin “selling against the iPhone” on Sept. 21. Of course, Sept. 21 is the rumored launch date for the latest handset out of Cupertino. T-Mobile is probably just making an assumption, rather than having inside knowledge, but you never know.

T-Mobile has been battling for the iPhone for years and does not have much to show for it. Last holiday quarter alone, the nation’s fourth-largest carrier lost 802,000 contract customers (many of whom moved to pre-paid plans).

T-Mobile hosts over a million iPhone customers on its network. Thanks to T-Mobile’s recent push to 1900MHz 3G network (and 4G at WWDC), customers are able to enjoy magenta’s network. Luckily, for those who want to take the unlocked route, another leaked memo today shows that T-Mobile will sell an updated MicroSIM kit that allows customers to use their iPhone 4 and iPhone 4S on the network. The new “Monthly4G microSIM kits” will begin arriving in stores Aug. 29 and will allow for T-Mobile’s awesome new unlimited data plan to be used. [TmoNews]