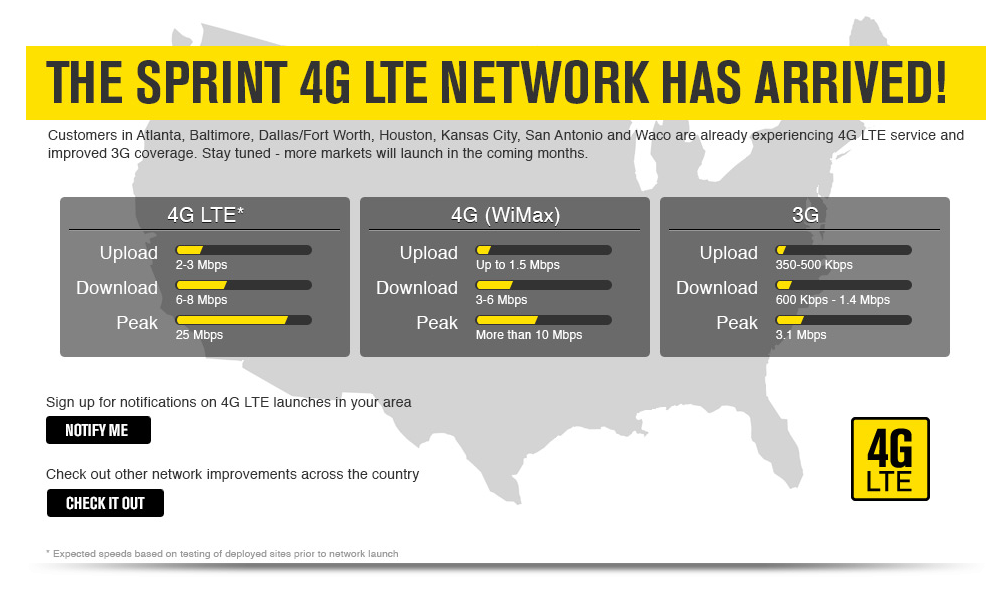 Sprint just announced it expanded 4G LTE data network coverage to customers in four more cities. Why do you care? Sprint carries the iPhone, but it does not carry the 4G LTE iPad partly due to its thin LTE spread. Sprint is thickening a bit now, however, so perhaps it will be on the same LTE footing when the LTE iPhone comes out in, oh, say a month.

According to the press release:

Sprint was the first national wireless carrier to introduce 4G (WiMAX) service in 2008, and the next-generation iPhone, which Sprint now carries, is largely expected to boast LTE capabilities. The carrier further told customers on its website to “stay tuned,” as more markets will launch “in the coming months.”

According to a CTIA survey of wireless customers, wireless data traffic increased 123 percent from 2010 to 2011. Network Vision is specifically designed to meet the growing 3G and 4G LTE network demands of wireless subscribers. People want to use their smartphones, tablets and wireless hotspots where they live, work and play.

“Our customers are enjoying new applications and devices that increase the demand for mobile data,” said Bob Azzi, senior vice president-Network, Sprint. “The network build-out – that today is playing out in four new cities – will provide nothing less than a state-of-the art network platform for the next generation of customers. Customers across the country will begin to experience better 3G service on their devices and will be able to take advantage of 4G LTE on cutting-edge devices as we continue to launch more cities.”

In Baltimore, customers will begin to see 4G LTE signals in the Inner Harbor, Fells Point, Federal Hill and Pikesville areas – with more sites being turned on in the days and weeks ahead. With the addition of 4G LTE and the upgrades to 3G service, the Sprint network in these areas can handle more voice and data traffic. Today’s network upgrades are expected to make sending text messages, surfing the Web, sharing photos, and streaming music and videos easier, faster and more reliable.

As consumers all over the country are becoming more dependent on their smartphones, network quality is becoming more important. In addition to Baltimore, Sprint is aggressively improving the 3G experience city by city. Today, customers in Boston and Washington, D.C., should also notice improved 3G cell coverage, reduced roaming and faster data speeds. The work to build Sprint’s all-new network will continue in other markets across the country. Sherman-Dennison, Texas, is expected to see 4G LTE service in the weeks ahead.

In today’s competitive wireless market, the value of unlimited has never been more apparent. Sprint’s Everything Data plan with Any Mobile, AnytimeSM includes unlimited data, texting and calling to and from any mobile phone in America while on the Sprint network, starting at just $79.99 per month for smartphones (pricing excludes taxes and surcharges).

During the past several years, Sprint has been working hard to deliver the best customer experience. The 2012 American Customer Satisfaction Index ranked Sprint No. 1 among all national carriers in customer satisfaction and most improved, across all 47 industries, during the last four years. Building an all-new network is the linchpin to make Sprint the company customers want to do business with.

Sprint 4G LTE made its debut in 15 cities on July 15, and the company plans to introduce more markets to the network in 2012. By the end of 2013, Sprint expects to have largely completed the build-out of its all-new 4G LTE and 3G nationwide network. For the most up-to-date details on Sprint’s 4G LTE portfolio and rollout, please visit www.sprint.com/4GLTE.