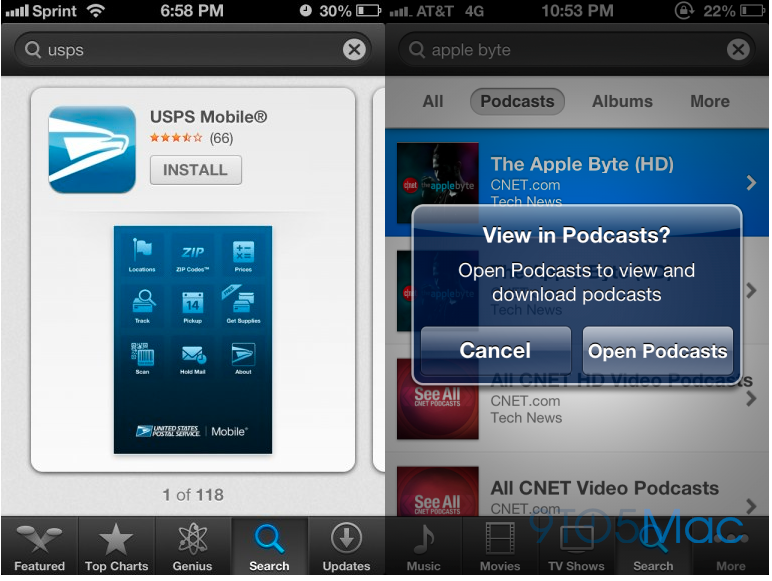 The App Store on iOS 6 beta, which is software currently only available to those a part of Apple’s Developer Program, scored a nice little update this evening. Most notably: the layout when searching for an app was given a considerable redesign. It now displays apps in swipeable cards on both the iPhone and iPad. In the nifty cards, users are presented with a screenshot of the app, along with the five-star rating system, and a handy button to install the app on your device.

Also adding to the iOS 6 App Store updates, Apple enabled the Genius recommendation section this evening to provide users with apps that may be in their interest to download. Furthermore, the purchased section also joined the party. It displays all the apps users have downloaded to their accounts, making it easy to retrieve favorite apps. Last but certainly not least, the iTunes Store was updated with the ability to once again search for podcasts. When a podcast link is opened, it requires Apple’s Podcast app to listen. All three features were available in the previous version of the App Store on iOS 5, so there is really nothing new here—except that Apple has finally chosen to give them the light of day within iOS 6.

The revamped iOS App Store and iTunes Store were both introduced at Apple’s Worldwide Developer Conference in June as a part of iOS 6. Apple is expected to unleash iOS 6 to the masses this fall, with more details expected to be announced at the company’s rumored Sept. 12 media event. We previously reported that Apple is working on a revamped desktop version of iTunes, but there is no word if it will be highlighted at the upcoming event. At any rate, this evening’s changes seem to show that Apple is getting closer and closer to a final product for its iOS 6 stores. Find any thing we have not mentioned? Let us know below!

Check out our hands on with iOS 6!