Another “iMac” has shown up on Geekbench (July, May), as AppleBitch notes, which adds to its speculation that an iMac refresh is forthcoming at around the time of the iPhone launch. This one notably has an unlocked Intel processor, 1333MHz RAM and runs a standard 10.8.1 build, which significantly diminishes its likelihood of being real.

But there have been some recent shortages on Apple resellers’ websites and now Apple’s own retail stores.

KGI Securities analyst Ming-Chi Kuo interestingly revised his estimates (via MacRumors) today on 27-inch iMacs shipping to being much further out in the year due to issues in the supply chain. However, it is not just the iMac. Kuo is pushing all of his predictions further as we end the month of August: 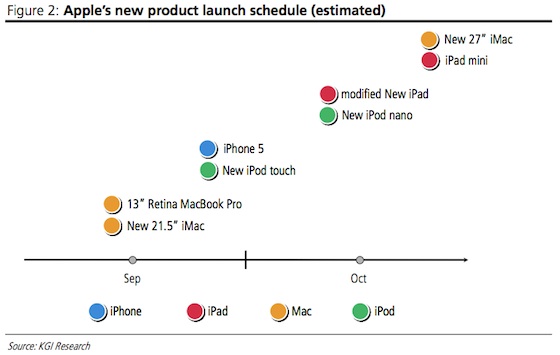 The shipping gap would imply a very unorthodox Apple release of the 21-inch iMac about two months ahead of the 27-inch iMac. Also unorthodox: Kuo is calling for the 13-inch Retina Pro to be released ahead of the new iPhone and just a quarter after Apple released all-new MacBook Pros including a 15-inch Retina version. (Interestingly—Samsung just announced a 13-inch ‘Retina’ laptop).

Also, in the wake of the recent October iPad Mini event news, Kuo is pushing his iPad mini shipping estimates out a month from mid-September to late October.

These figures vary widely from his estimates from just a month ago, where all of Apple’s new products were to hit the pavement by the end of September and the Touch and Nano were to ship at the end of August: 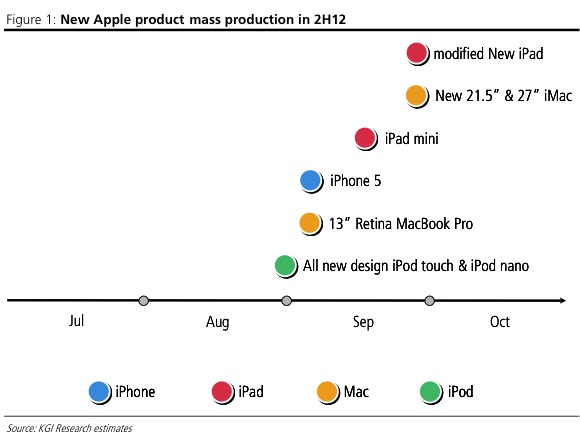 For what it is worth, we are hearing of backend shortages too. We hope to have some information shortly.