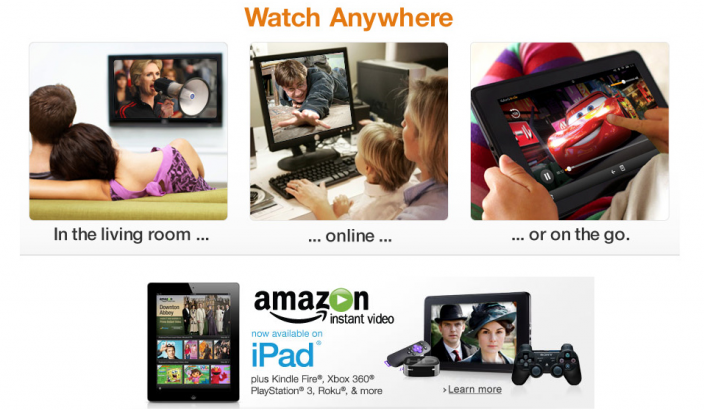 Amazon has consistently bulked its Prime Instant Video service with many Hollywood studio and cable network agreements since the Kindle Fire launched last year, and now it is announcing a new multi-year licensing deal with EPIX studio in the United States.

The agreement adds thousands of fresh and old titles, as well as original programming, from Paramount Pictures, Metro-Goldwyn Mayer Pictures, Liongates, and other EPIX partners. The beefed catalog more than doubles Prime Instant Video’s previous content offering, which provides instant, unlimited streaming to paid Prime members on the Android-powered Kindle Fire or other supported devices like the iPad.

A few of today’s content additions include “The Avengers”, “Iron Man 2”, “The Hunger Games”, “Transformers Dark of the Moon”, “True Grit”, and more. It is worth noting Amazon plans to hold a product launch event on Sept. 5 in Los Angeles; the glitzy location could suggest more content deals are coming down the pipeline.

Prime Instant Video continues to expand as another benefit of Prime membership, Kindle Fire ownership and one of the many unique advantages of Amazon’s content ecosystem

Customers who are not yet Prime members can enjoy a free one month trial right out of the box with Kindle Fire, or sign up for a free trial at Amazon.com to enjoy on any device that streams Prime Instant Video

SEATTLE & NEW YORK–(BUSINESS WIRE)–Sep. 4, 2012– (NASDAQ: AMZN) – Over the past 12 months, Amazon has announced agreements with every major Hollywood studio, as well as top cable networks. Today, Amazon and EPIX announce a multi-year licensing agreement in the U.S., which will add thousands of new releases, classic library titles and original programs to Prime Instant Video. Programming from the agreement includes movies from EPIX studio partners, Paramount Pictures, Metro-Goldwyn-Mayer Pictures, and Lionsgate. The agreement between Amazon and EPIX will more than double the number of titles available with Prime Instant Video since Amazon introduced Kindle Fire last September. Prime Instant Video now stands at over 25,000 movies and TV episodes available to watch with instant, unlimited streaming at no additional cost to Prime members. Customers who are not yet Prime members can enjoy a free one month trial right out of the box with Kindle Fire. To start watching Prime Instant Video, visit www.amazon.com/PIV.

This agreement between Amazon and EPIX will add new releases such as The Avengers, Iron Man 2, The Hunger Games, Transformers Dark of the Moon, Thor and Rango as well as popular favorites such as Kick Ass, Paranormal Activity 2, True Grit, The Lincoln Lawyer, and Justin Bieber Never Say Never. EPIX also brings original programming including comedy specials and concerts such as Kevin Smith: Burn in Hell and Usher: Live from London.

“We are investing hundreds of millions of dollars to expand the Prime Instant Video library for our customers. We have now more than doubled this selection of movies and TV episodes to over 25,000 titles in just under a year,” said Bill Carr, Vice President of Video and Music at Amazon. “We are thrilled to be able to offer our customers such popular EPIX titles, many of which were just recently in theaters. We can tell from the data that our customers love watching movies on Prime Instant Video. We think customers will really enjoy watching new titles like The Avengers, Iron Man 2 and The Hunger Games on their Kindle Fire, PlayStation 3, Xbox, iPad or any of the other of the Amazon Instant Video compatible devices.”

“We are excited to be working with Amazon and to bring our compelling content to Amazon Prime and Kindle Fire customers,” said Mark Greenberg, President and CEO of EPIX. “This partnership is yet another great example of EPIX’s ability to broaden our reach through a digital platform, underscoring the incredible value of the EPIX content offering.”

Amazon Prime is an annual membership program for $79 a year that offers customers unlimited Free Two-Day Shipping on millions of items including books, home and garden products, electronics, video games, clothing, and much more. Amazon Prime members also get access to unlimited instant streaming of thousands of movies and TV episodes and access to tens of thousands of books to borrow for free, as frequently as a book a month, with no due dates from a Kindle device. Customers who receive free Prime shipping benefits through our Amazon Student or Amazon Mom programs can upgrade to an annual paid membership to receive Amazon Prime’s digital benefits.

Amazon.com, Inc. (NASDAQ: AMZN), a Fortune 500 company based in Seattle, opened on the World Wide Web in July 1995 and today offers Earth’s Biggest Selection. Amazon.com, Inc. seeks to be Earth’s most customer-centric company, where customers can find and discover anything they might want to buy online, and endeavors to offer its customers the lowest possible prices. Amazon.com and other sellers offer millions of unique new, refurbished and used items in categories such as Books; Movies, Music & Games; Digital Downloads; Electronics & Computers; Home & Garden; Toys, Kids & Baby; Grocery; Apparel, Shoes & Jewelry; Health & Beauty; Sports & Outdoors; and Tools, Auto & Industrial. Amazon Web Services provides Amazon’s developer customers with access to in-the-cloud infrastructure services based on Amazon’s own back-end technology platform, which developers can use to enable virtually any type of business. The new latest generation Kindle is the lightest, most compact Kindle ever and features the same 6-inch, most advanced electronic ink display that reads like real paper even in bright sunlight. Kindle Touch is a new addition to the Kindle family with an easy-to-use touch screen that makes it easier than ever to turn pages, search, shop, and take notes – still with all the benefits of the most advanced electronic ink display. Kindle Touch 3G is the top of the line e-reader and offers the same new design and features of Kindle Touch, with the unparalleled added convenience of free 3G. Kindle Fire is the Kindle for movies, TV shows, music, books, magazines, apps, games and web browsing with all the content, free storage in the Amazon Cloud, Whispersync, Amazon Silk (Amazon’s new revolutionary cloud-accelerated web browser), vibrant color touch screen, and powerful dual-core processor.