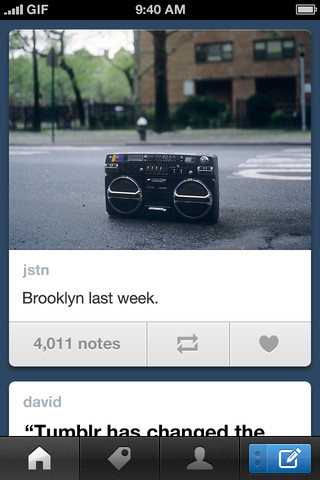 Gmail version 1.3.1: The Gmail iOS app was updated today with the ability to open web links within the Chrome iOS app instead of Safari. A handful of bug fixes were also included.

Tumblr version 3.1.0: Tumblr’s iPhone app gets a nice update that brings improvements to notifications, the ability to discover new blogs to follow via Facebook or your contacts and an option for your friends to sign up within the app itself. Other improvements included in the update: you can now track specific tags, a fast re-blog option by tapping and holding the re-blog icon and the ability to send fan mail. There are also some new sharing options when holding the “Like” button.

Minecraft – Pocket Edition version 0.4.0: A major release for the Pocket Edition of Minecraft includes a ton of new features, items, tweaks and bug fixes. A full list of what is new is below:

– Chests for storing items!
– Beds for skipping to dawn (day and nights are now longer), and set your spawn point to the bed’s position.
– Creepers and TNT (use flint and steel to ignite)!
– Added food. Eat it to restore health.
– Farming; wheat, seeds and hoe.
– Peaceful mode setting: healing and no monsters.
– Trapdoor, new dyes and a few new recipes.
+ More: close to 20 bug fixes and tweaks, e.g. monsters spawned when bright, client fall damage.

MAKE YOUR STAND
* The Last Stand Game Pack features 5 new levels plus an Endless variant.
ACHIEVE GREATNESS
* Unlock 3 new achievements: Hammer Time, Still Standing and The Stuff of Legends.
AS SMART AS A BAG OF HAMMERS
* Pick up a new Mallet Pack to help you whack zombies in Survival and Last Stand Endless modes.
PvZ STUFF
* Check out the PvZ Store for loads of great Plants vs. Zombies goods.