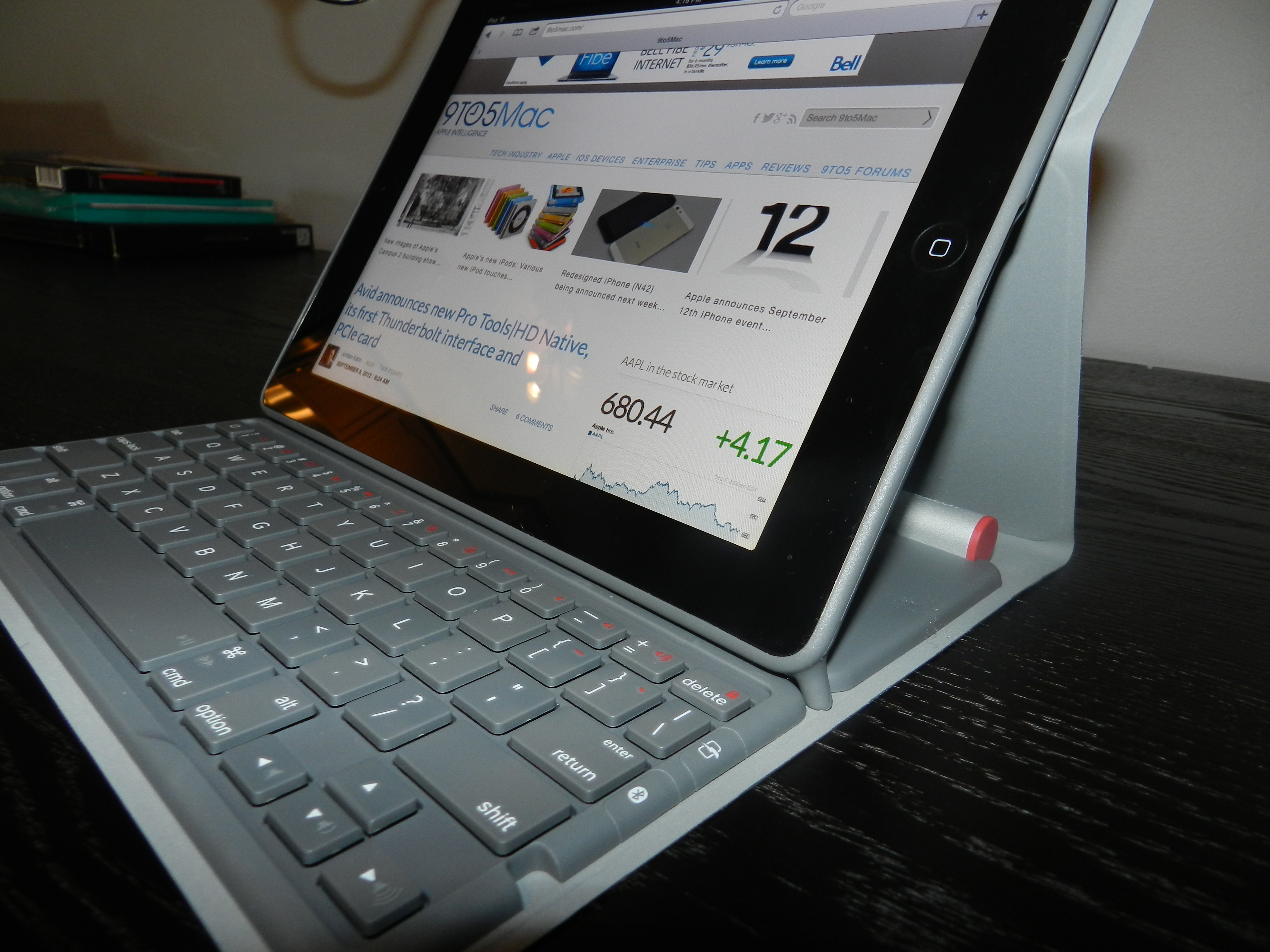 We recently reviewed one of our favorite keyboard solutions for the iPad, Logitech’s Ultrathin iPad Keyboard Cover. However, we have seen a few new competitors since then. Most notably: ZAGG’s new KeysPRO line, which we were able to get our hands on at IFA last month. The ZAGGKeys PRO caught our eye with its backlit keys, rugged build quality and battery life of up to three weeks at eight hours a day. It has potential to become the go-to iPad keyboard when it goes on sale at the end of the month (full review on the way), but one keyboard recently released already has it beat, at the very least, on battery life…

Logitech’s new Solar Keyboard Folio for iPad 2 and 3 comes with one impressive claim: the ability to type for two hours a day for two years on a full charge…even in the dark. That claim combined with a solid Logitech keyboard similar to what we’re used to from the company’s past iPad products, we essentially get solar power and a folio-style case added to the Ultrathin Keyboard cover for an extra $30.

I have had long enough since its release to put it to the test and have a couple of thoughts: 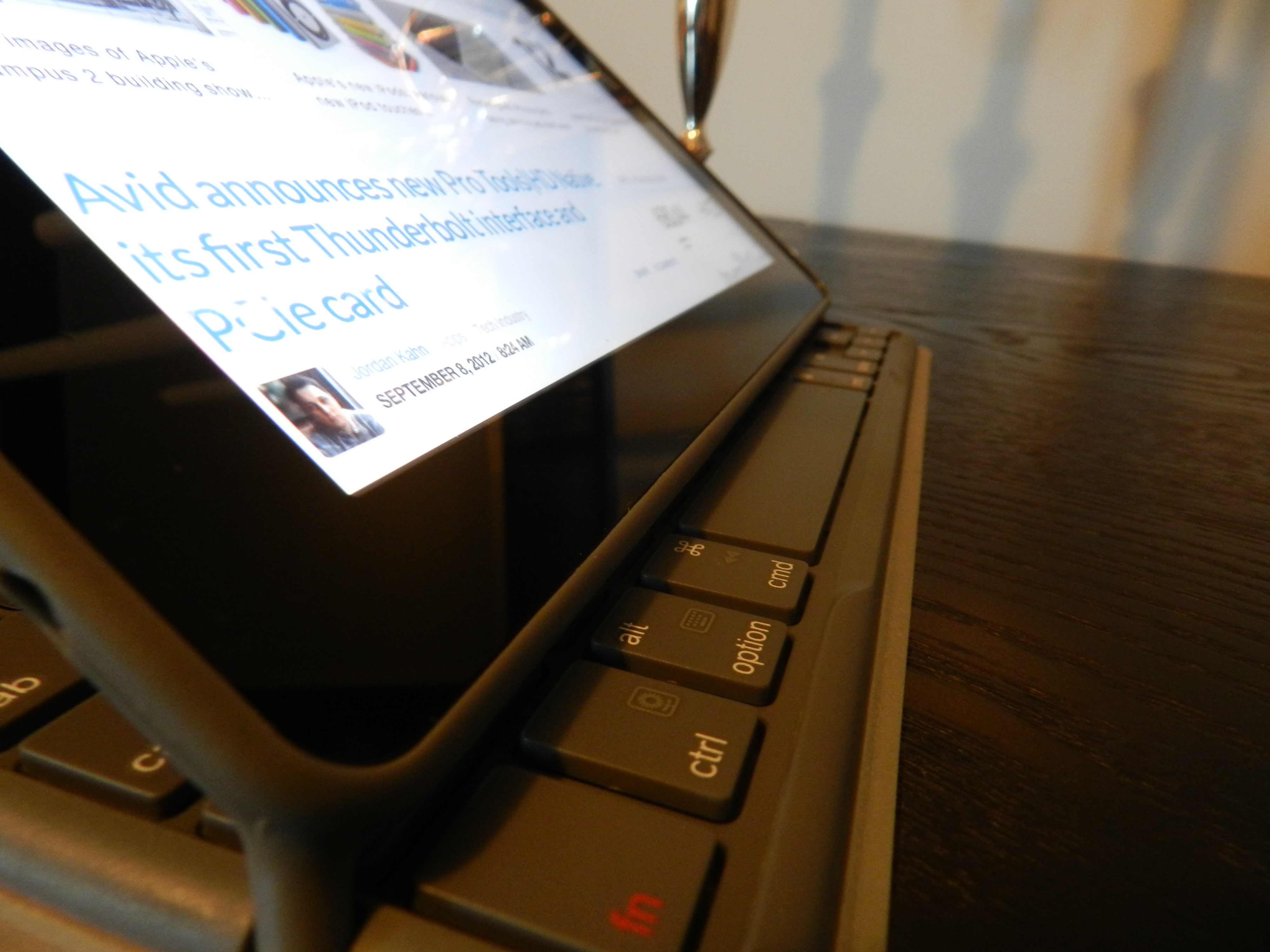 There are a few added benefits to the folio design opposed to the magnetic cover design of Logitech’s Ultrathin and the ZAGG Keys. Apart from the obvious back protection and front protection, you will also get two viewing angles. Typing mode gives you full access to the keys, while entertainment mode reveals just the bottom row of keys and automatically switches them to function as media controls like play, pause, fast forward and rewind. The keyboard detects when you are in entertainment-viewing mode (pictured right), and it switches Space to a play/pause button, cmd to rewind and fast forward, and the arrow keys to volume and mute without having to use the fn key. Ctrl will launch the Photos app and start a slideshow.

Like the Ultrathin, it also has iOS-specific buttons as second functions along the top row that work when holding down the fn key. These include the Home button, text editing buttons, volume, etc.

I have absolutely no complaints with the keyboard. Like other iPad keyboards, the keys are a little smaller than an Apple keyboard. It only took a few minutes to get comfortable transitioning from my MacBook Pro, though. Much like we said about the Ultrathin, the keys feel quite similar to a MacBook. However, the plastic is noticeably of lesser quality. In comparison, the ZAGG Keys feel a lot closer to MacBook quality…

Not surprisingly, the Solar Keyboard Folio did not completely lose its charge while I was reviewing it. Logitech recommends six hours in a room with decent lighting for a full charge. In other words, if you store the case in a room with even low light, you should not have to ever worry about it dying on you.

Keyboard aside; the case is quite flimsy compared to the leather Cygnett Folio I was using before. The iPad automatically wakes when you open the Solar Folio, but the lack of a magnetic closure means it could easily open, activate the display, and start draining power when in a bag or even holding it. It seems odd, though, as other reviews noted, that Logitech actually decided to include a magnetic closure on the packaging for the Solar Folio. A slim plastic lip around the entire bezel holds the iPad snugly, but the faux leather material is as thin as possible and it could have benefited from a bit more rigidity. That said, it doesn’t feel too bulky compared to the average folio even with the addition of its solar panel. If the quality of the case’s exterior were a little closer to my $50 leather folio, I would be much more inclined to make this my everyday case.

If you are like me, and do not use a physical keyboard with your iPad everyday, you might want to wait for our full review of the ZAGG Keys Pro or grab a Logitech Ultrathin and continue using your case of choice. If you do want an almost MacBook-quality keyboard attached to your iPad at all times, which you will never have to worry about charging, you will not be disappointed about dropping $129 for the Logitech Solar Keyboard Folio.