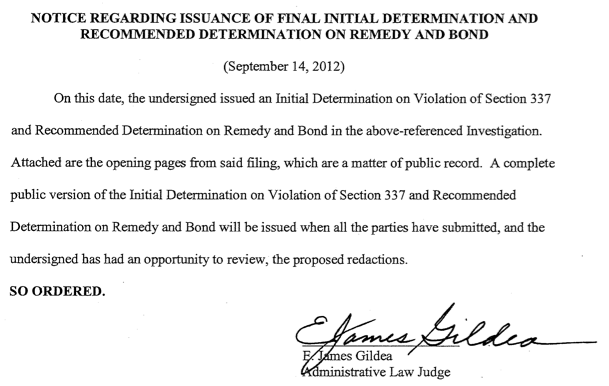 Apple just won another ruling brought by Samsung, according to a U.S. International Trade Commission notice, in regards to patented technology found in iOS devices.

Apple Inc. (AAPL) won a round of a U.S. International Trade Commission case brought by Samsung Electronics Co. (005930) over patented technology in the iPhone and iPad tablet computer, its second U.S. legal victory in a month over its largest smartphone competitor.

Apple didn’t violate Samsung’s patent rights, ITC Judge James Gildea said in a notice posted on the agency’s website. The judge’s findings are subject to review by the full commission, which has the power to block imports of products that infringe U.S. patents.

…Gildea said there was no infringement of any of the four patents in the ITC case, and also determined that Samsung had not proven it had a domestic industry that used the patents, a requirement that is unique to the trade agency. The judge didn’t provide the reasons behind his findings. The opinion will be public after both sides get a chance to redact confidential information.

Get more details at Bloomberg.