How much do Americans spend on damaged iPhones? [Infographic] 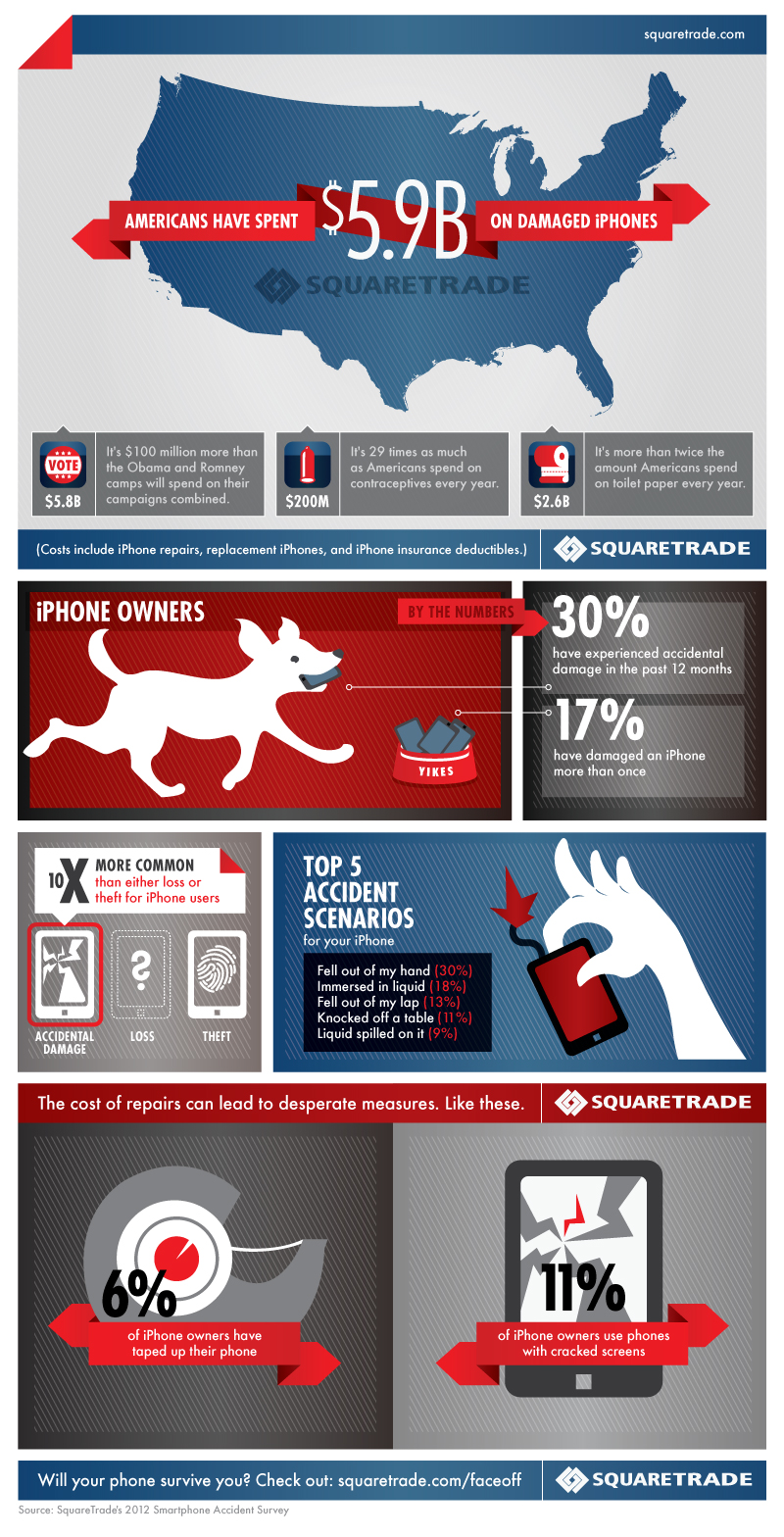 SquareTrade, which makes warranties for things like the new iPhone 5, conveniently put out the infographic above. Square trade also covers jailbroken iPhones.

As iPhones become an increasingly central part of our daily lives, accidental damage is 10 times more common than loss or theft. The study also shows that younger consumers are clumsiest with their iPhones: one in two iPhone owners under 35 have had an accident.

The top five iPhone accident scenarios according to the study are:

1. Phone dropped from my hand

2. Phone fell into a toilet, a swimming pool or a lake

4. Phone knocked off a table

5. Phone drenched by some liquid

“Today’s devices are racing to be thinner and lighter, with little regard to durability. And yet our lifestyles make them more vulnerable than ever to accidents,” commented Ty Shay, CMO at SquareTrade. “We were astonished at how many people drop their phones in the toilet as well as how frequently an innocuous drop from the hand actually killed the device. We look forward to seeing what the new iPhone 5 users report with regard to durability.”

SquareTrade’s recent study indicates that due to the often costly expenses associated with repairing damaged iPhones, many consumers often resort to “desperate” measures. For example, 11% of iPhone owners are currently walking around with a device that is cracked and 6% have taped up their iPhone as a solution.

Founded in 1999, SquareTrade works with top retailers to offer warranties that make sense with a no-hassle service to protect consumer electronics and appliances. SquareTrade’s service is uniquely researchable with millions of customers who have consistently rated SquareTrade’s service 5-star reviews. SquareTrade was awarded BizRate’s Circle of Excellence for 2010, and is the winner of the 2012 and 2011 Stevie Award for Sales & Customer Service and The 2012 People’s Choice Stevie Award. SquareTrade is privately held and headquartered in San Francisco. Recently Bain Capital led a $238 million growth investment in SquareTrade. For more information, go to www.squaretrade.com.