Twitter for iPad gets a new landscape UI, profiles with header photos, and enhanced photo streams 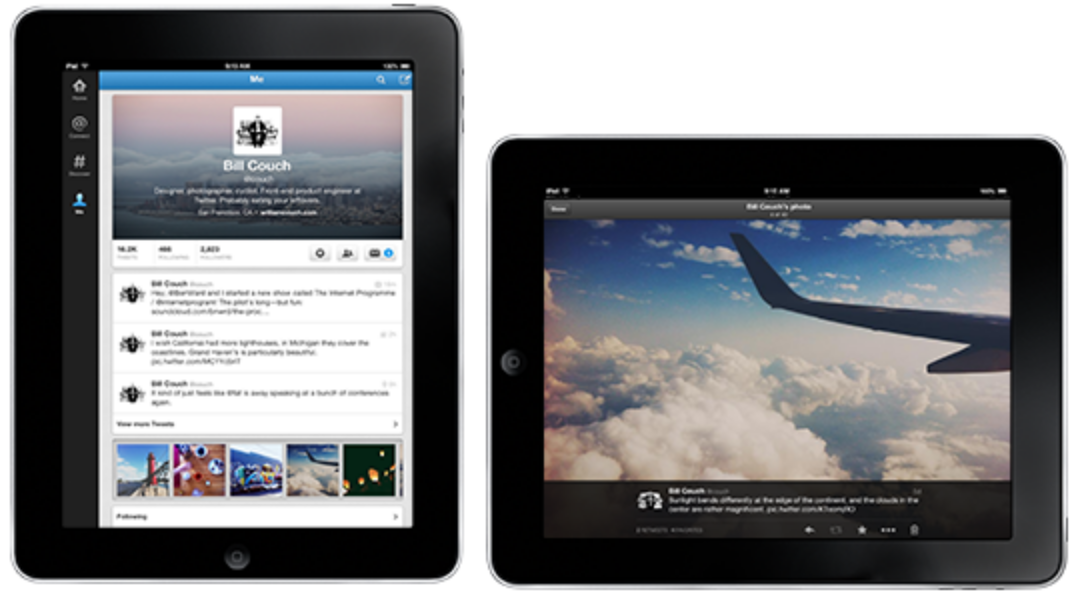 Twitter just updated its universal iOS app with a few new improvements, the most notable of which is a new landscape UI for iPad. Other aspects of the iPad UI have been slightly tweaked over the previous version, while version 5.0 of the app also brings new profiles with header photos, photo streams on profiles and events, and various other fixes and enhancements for both the iPad and iPhone client.

Among the improvements to the iPad UI: Tweets now come in a compact view and can expand with a single tap to view videos, web pages, and photos directly from within your timeline.

In a post on the official Twitter blog, Product Manager Sung Hu Kim took us through a few of the updates:

Tweets come alive in the new Twitter for iPad. Expand Tweets with a single touch to see beautiful photos, rich videos and web page summaries right in your timeline. Dive into the content with another tap to see the photo, play the video or read links from the web in fullscreen mode.

Keep conversations going by tracking your interactions with other people: See who has followed or mentioned you, retweeted or favorited your Tweets.

Tap into a stream of useful and entertaining information personalized for you. Read news stories that are popular within your network, see which Tweets and accounts are favorited and followed by the people you know, see what topics are trending, and find great new accounts to follow.

Express yourself by adding a beautiful new header photo to your new profile. It appears consistently above your Tweets on iPad, mobile apps and twitter.com, and you can change it anytime. You can also remember the moments you’ve shared on Twitter by swiping through your photo stream on your profile or tapping photos to go fullscreen.

The new Twitter for iPad UI in Landscape pic.twitter.com/Aet6XH2E

@9to5mac ...and taken away the option to choose which photo uploader to use, from what I can see.

@9to5mac New design is not that good as the old one :(
Not even more intuitive ...

@9to5mac and have a bug in the follow button inside each profile.