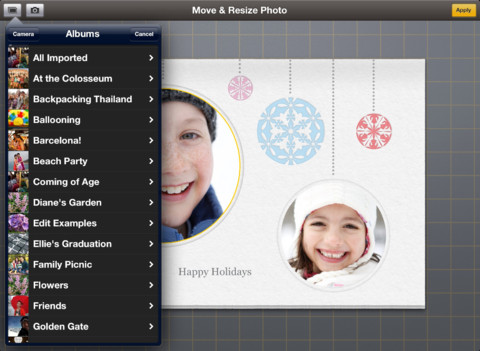 As expected, Apple is releasing updates to many of its iOS apps today including Garageband, Keynote, Numbers, Cards, iPhoto, iMovie, and Find My Friends with support for iOS 6 and other new features. We also expect to see a few more updates headed towards the rest of Apple’s own iOS apps today following the public release of iOS 6 earlier today.

Some of the new features now available in the updated apps, in addition to iOS 6 support: Location-based alerts in the Find My Friends app, the ability to create custom ringtons and alerts in GarageBand, iPad support for Cards with a new universal app (and new themes, layouts, and iPhoto integration) , and huge updates to iPhoto and iMovie that bring a long list of new features. Release notes for all the new updates below:

• Create custom ringtones and alerts for your iPhone, iPad, or iPod touch* • Import songs from the Music library on your iOS device • Play or record with GarageBand in the background while using other apps** • Addresses a number of minor issues related to overall performance and stability

• Three new trailers — Adrenaline, Coming of Age, and Teen • Add photos to any trailer and have them automatically animate with the Ken Burns effect • On iPad, open the Precision Editor to create split audio edits • Play clips in the Video Browser before adding them to your project • Create a slideshow by sharing photos from iPhoto for iOS • Tap the help icon to display Coaching tips • 1080p HD upload resolution is now available for sharing to YouTube, Facebook, Vimeo, and CNN iReport • Audio recordings captured in a project now appear in the Audio Browser for easy access

• Added support for iPod touch (4th generation and later) • Coaching tips have been added to the Help system on the iPhone and iPod touch • Effects now include six new Apple-designed ink effects such as Chalk and Palette Knife • Images up to 36.5 megapixels are now supported* • Full resolution photos can now be imported via iTunes File Sharing • Tag albums can be created by adding custom tags to photos • “Updating Library” alert appears less frequently • Multiple photos can now be saved to the Camera Roll at one time • Cropping presets now use detected faces to determine composition • Tilt-shift and gradient effects can now be rotated • Facebook sharing now supports single sign-on in Settings • Comments can be added more easily when posting photos to Facebook • Videos can be uploaded to Facebook • Locations and friend tags can now be set when posting photos to Facebook • Comments and locations can be set on individual photos when sharing a group of photos to Facebook • Any photo previously posted to Facebook can be more easily replaced with a more current version • A notification is now displayed when an upload to Facebook completes in the background • Photos can now be shared directly to Cards, iMovie, and other supporting apps • Journals now include new layout options • Fonts and alignment of text in journal items can be modified • New style and color options are available for Note and Memory items in journals • Journal Note and Memory items can now be resized • Dividers can be added to break journal pages into sections to control the reflow of layouts • A new Swap mode makes it easier to change the placement of items in a journal layout • You can now place a pin on a journal map when no location data is present • Links to journals can now be shared directly to Facebook and Twitter, and via Messages • Links to remote journals can now be shared even if the journal was created on another device • A new Publish Changes button provides control over when to update your journal • An overlay displaying month and year now appears when scrolling in Photos view • Photos can now be sorted by date and can be filtered using new criteria • Photos view now includes a Power Scroll strip for high-speed scrolling • Grid of thumbnails can now be expanded to multiple rows in portrait orientation

iTunes U 1.3 adds support for iOS 6. This version also provides: • A new single day view to see all of your posts and assignments due on a particular day. • Addresses an issue which prevented Closed Captioning from appearing when available.

Podcasts 1.1 adds support for iOS 6. This version also provides: • Automatically keep your podcast subscriptions up-to-date between devices using iCloud • A new setting to choose to automatically download new episodes only when on Wi-Fi • A new setting to choose whether to play episodes by oldest to newest or newest to oldest • Pull to refresh a subscription to check for new episodes on iOS 6 • Additional performance and stability improvements