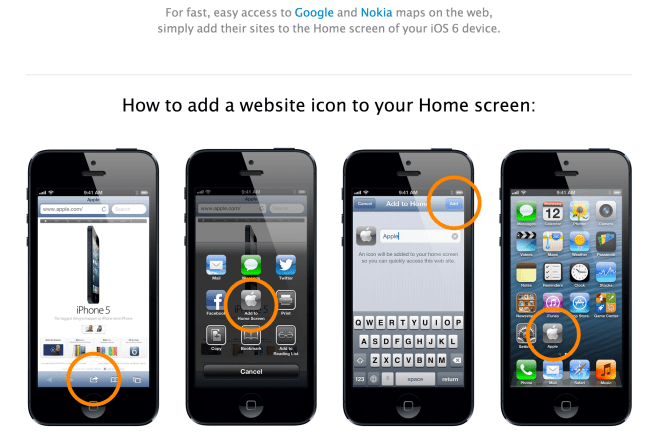 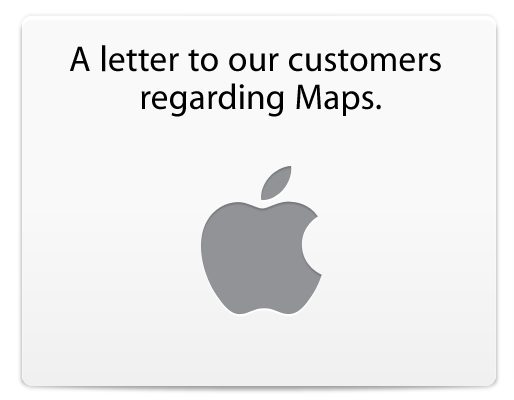 Apple just published an open letter from Apple CEO Tim Cook explaining to customers that it “fell short” in delivering the best experience possible with the new Maps app. Within the letter, Cook noted the company is doing everything to improve the app. However, it recommended a number of alternative apps and web apps for users to try in the meantime. Among his recommendations: Bing, MapQuest, Waze, or the Google or Nokia web apps. Links in the letter point customers to the featured section for mapping apps on the App Store and another to the graphic above showing how to install the Google and Nokia web apps. The letter is currently posted through a link displayed prominently on the Apple.com homepage.

At Apple, we strive to make world-class products that deliver the best experience possible to our customers. With the launch of our new Maps last week, we fell short on this commitment. We are extremely sorry for the frustration this has caused our customers and we are doing everything we can to make Maps better. 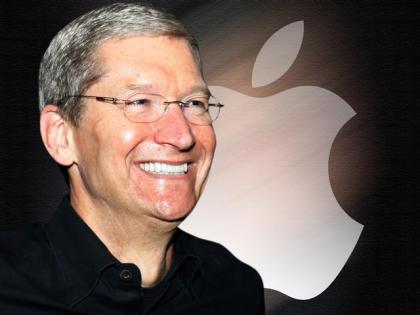 We launched Maps initially with the first version of iOS. As time progressed, we wanted to provide our customers with even better Maps including features such as turn-by-turn directions, voice integration, Flyover and vector-based maps. In order to do this, we had to create a new version of Maps from the ground up.

There are already more than 100 million iOS devices using the new Apple Maps, with more and more joining us every day. In just over a week, iOS users with the new Maps have already searched for nearly half a billion locations. The more our customers use our Maps the better it will get and we greatly appreciate all of the feedback we have received from you.

While we’re improving Maps, you can try alternatives by downloading map apps from the App Store like Bing, MapQuest and Waze, or use Google or Nokia maps by going to their websites and creating an icon on your home screen to their web app.

Everything we do at Apple is aimed at making our products the best in the world. We know that you expect that from us, and we will keep working non-stop until Maps lives up to the same incredibly high standard.