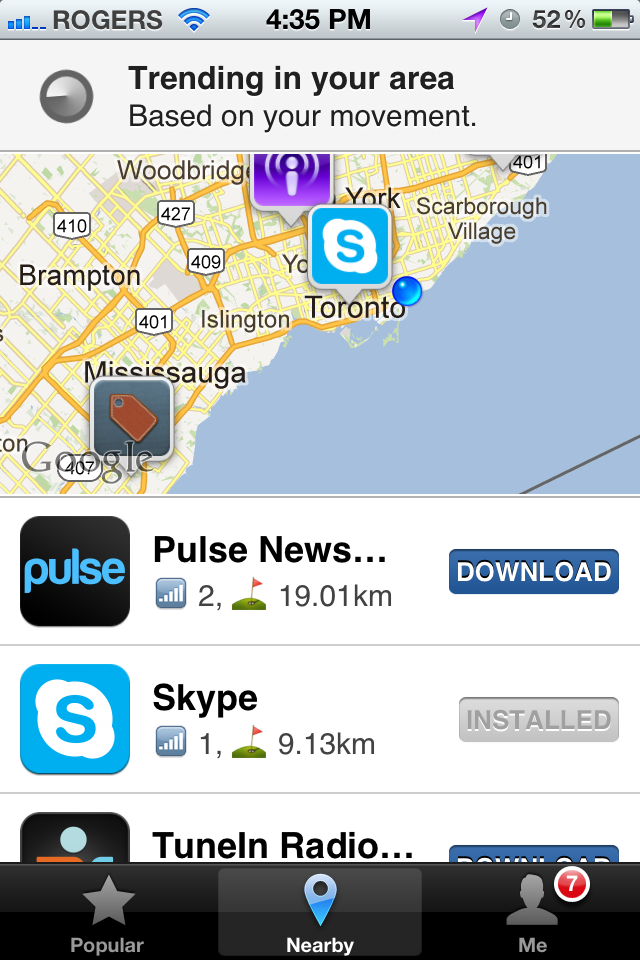 A new free app launching in the App Store today, called “App Map,” allows users to discover apps based on the most commonly used by other iOS users in their area. After prompting the user with the usual dialog to allow access to location, App Map requests access to “send a list of your recently used Apps” to its server. Within the app, users can view a list of trending apps worldwide, as well as a live-updating map and list of nearby apps based on number of users and distance from their current location.

App Map does not appear to store all of the apps on a user’s device but instead collects a selection of what it deems the most used (in my case: a couple apps that have not been used in several months…and a total of 7). In some cases, an app’s name is not recognized properly or it is changed, but App Map allows users to correct or “Identify” those apps by searching from an app index.

App Map analyzes the list of running Apps on your phone (don’t worry, we can’t see any of your private data!) and simultaneously shows you what Apps are being used nearby… Help us confirm identity of the Apps you use (inside of the “Me” tab), and you’ll receive even more relevant results! Search for Apps that are not recognized to help others identify theirs, automatically.

According to the app’s developers, the app does not collect any of users’ private data:

“Data is submitted anonymously with no personal identifiers, except for your location only if ‘Location Services’ are enabled as recommended.”

It seems like App Map could fall victim to Apple’s new App Store guidelines clause preventing developers from displaying apps other than their own “for purchase or promotion in a manner similar to or confusing with the App Store.” App Map has already hit most App Stores around the world as a free download and already had quite a few users trying the app when we tested it (at least locally, in Toronto, Canada).

☆ Up to 8 hours of location-based nearby App activity cached + displayed, based on your travels!

☆ Popular means popular. We only display Apps that are actually being used by others.

☆ Tell your friends! The more users with App Map, the better the results.