T-Mobile to drop ‘iPhone’ references from ‘Bring Your Own Device’ campaigns? 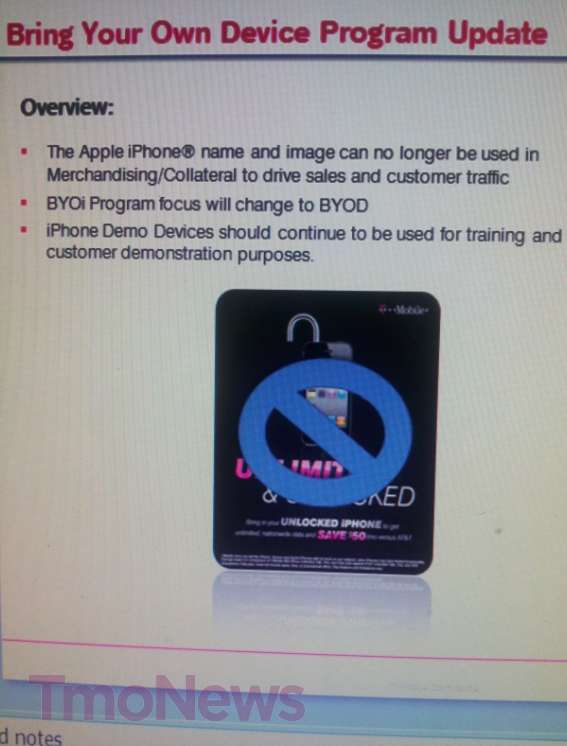 Right before Apple was set to launch the iPhone 5 in mid-September, the nation’s fourth-largest, iPhone-less carrier T-Mobile prepared an aggressive campaign to capture iPhone users on its network. Coincidentally launched on Sept. 21, T-Mobile promises up to $1,200 in savings over AT&T for unlocked iPhone users. T-Mobile even has a nano SIM just for those making the switch, along with trained T-Mobile salespeople who are able to instruct users on unlocking in-store. They will not physically open the devices, however. This is an unprecedented move—especially for a device that T-Mobile does not officially carry.

Today, TmoNews reported that T-Mobile has issued an internal memo that said the company would no longer use Apple or iPhone in its “Unlimited & Unlocked” campaign. It is not clear if Apple lawyers’ intervened, but we reached out to T-Mobile for clarification. T-Mobile will continue to carry iPhones for demonstration purposes and advice.

Update: A T-Mobile spokesperson told us the following:

T-Mobile’s planned efforts have not changed.  As noted in T-Mobile’s September 10th blog — http://blog.t-mobile.com/2012/09/10/t-mobile-steps-up-bring-your-own-iphone-efforts/ — T-Mobile has stepped up its Bring your own device efforts – which include unlocked iPhones.  These efforts began in September and will continue as planned this fall.

As many of you know, T-Mobile has been very apt to catering to iPhone users in the past. The carrier has catered to iPhone users since the launch of the first-generation in 2007 with its Edge speeds, subsequently garnering in over 1 million iPhone users on its network. This year, T-Mobile announced its iPhone-compatible 1900MHz 4G network is rolling out in Seattle, Las Vegas, Washington, DC, and the New York metro area.

Interestingly, T-Mobile did not mention the iPhone in its 4G network advertisements.

We will update you when we have more.