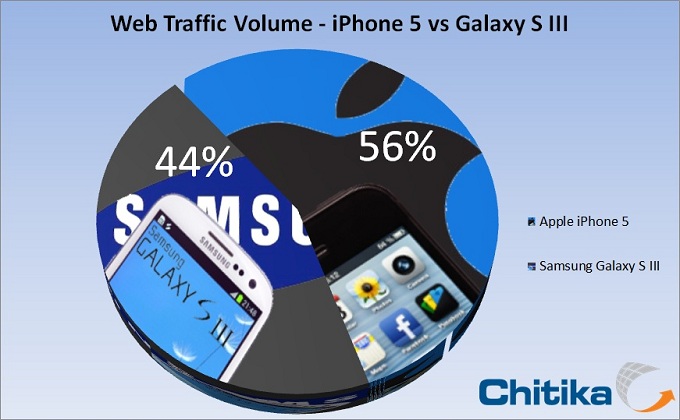 Not the best looking pie chart—especially for Samsung.

The latest report from research firm Chitika depicts the iPhone 5 as gobbling up 56 percent of Web traffic volume, compared to the S III’s 44 percent, in just 18 days since it officially released. Chitika attributed the sudden growth to record-breaking sales numbers and 4G speeds:

Record-breaking sales numbers, along with new 4G browsing speeds which encourage data usage, are the most likely explanation for this tremendous growth. This latest shift in the mobile ecosystem is not welcome news for Samsung, which has positioned its device as a direct competitor to the iPhone 5.

Chitika has notably come under fire recently for publishing incorrect information on Google’s local search queries. The firm realized its errors after reading an article by SearchEngineLand. While today’s Web traffic report is significant—yet sudden— for Apple, lets hope Chitika has straightened out its metrics for analyzing Web data.

Today’s iPhone 5 news also confirms that Apple’s new Maps app, and the contention surrounding it, has made no significant impact on sales. ChangeWave Research and 451 Research surveyed 4,270 North American consumers just last month and found the controversy and negative press regarding Maps was not a factor in purchasing.