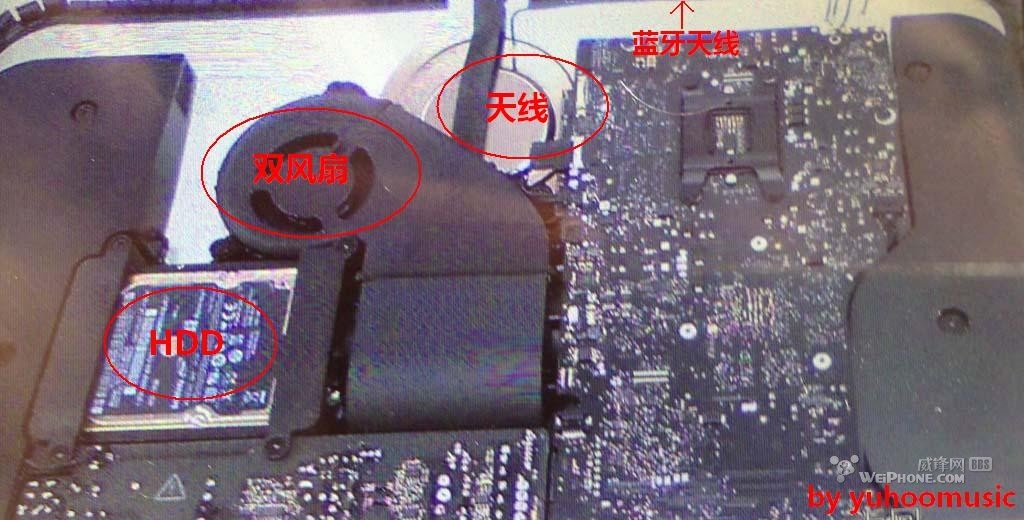 MacRumors points to a WeiPhone.com forum thread [Google translation] this morning that purports to show details of a new iMac. The poster’s brother-in-law apparently works in the factory that builds the new Macs, and he snapped the above picture on his cell phone. The design was verified by iFixit to be similar to the internals of a current iMac with the plastic radio-transparent circle on the rear.

On the iMac, the poster says:

The more expensive iMac and redesigned screen might hint at Retina. However, strangely, the poster does not mention anything related to this.

Interestingly, the poster mentions the 15-inch Retina MacBook Pro, aside from being produced in Mexico, will see a silent update for screen blur and cooling improvements.

In another post, the poster talks about trouble with the glue and Foxconn.

My uncle told me the newly launched products will have a lot of problem. This is because Tim Cook changed the way Steve Jobs used to do things which is having multiple suppliers. The problem with one sole supplier. Obvious example Foxconn!

Now a lot of more capable supplier is under Foxconn, other smaller supplier just can\’t cope with the demand. The new iMac is using a special \”glue\” to glue the display to the frame and is facing very strict quality control.

Products from Foxconn is having a lot of issues. In this case, after the glue dried, there will be minor air gaps. Apple had no choice but to use Foxconn because most of the capable manufacturer is now all under Foxconn. Therefore defects of the iPhone 5 is not that hard to understand(because Foxconn makes them all).

“My uncle works at iMac design department. Recently I had a small chat with him regarding the rmbp and the new imac.

1. The rmbp in production line D2 is identified as defected products as in terms of thermal heating and screen ghosting. P/S: Apple is not going to re-launch the 15\” rmbp. Just that Apple will improve on the production technique in D2 line. Apple will launch the 13\” rmbp. Ghosting and thermal issues will be fixed but internals and design will be similar to 15\” rmbp.

2. D1 is now in production in Mexican region(perhaps referring to Brazil I guess?). China will mass produce at the end of the month only after overcoming the production line issues. There will be a new 13\” rmbp.

4. New iMac\’s design will be revolutionary. Design includes: From side, it is nearly impossible to see the iMac\’s thickness. Teardrop shaped design. Compared to iMacs now, they are basically different thing. Introduction of new techniques including the use of special \”glue\” to glue the display to the frame. Front of the display will have a special glass glued to the it. Narrow edge design but the bottom front is still wide. iMac\’s stand is now more rigid and stronger. Retail price will be more expensive than current iMacs. 21\” iMacs will launch first followed by 27\”.

My uncle has seen the fully assembled iMac but recently unable to take a picture of it. If he did take the picture, I will update this thread.”