Apple to fight MS Office for iPad with special cloud version of iWork in conjunction with VMware? 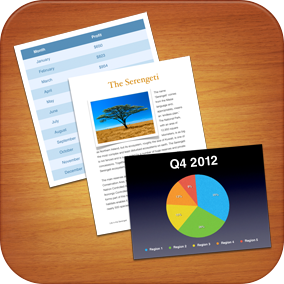 According to a report from CRN, Apple is apparently working with VMware on a cloud-hosted office suite iPad app that is said to combine Apple’s iWork apps and VMware View virtual-desktop software. The app is supposedly being built to be a direct competitor with Microsoft Office and its cloud services.

The report said the app will include cloud-hosted versions of Numbers, Keynote, and Pages apps, and it will bring functionality of VMware’s “Horizon Application Manager.” It also claimed that the cloud infrastructure being used for the app is separate from iCloud, indicating the service would be aimed at business customers:

The infrastructure that Apple is building for iWork is a separate offering from iCloud, Apple’s consumer-focused storage service. Sources did not have any information on when the cloud-hosted iWork suite will be released or what it will cost, sources told CRN…

CRN said Apple’s decision to develop the service is to compete with the rumored iOS version of Microsoft Office expected sometime in March:

The iWork suite has been primarily aimed at consumers since Apple launched it in 2005. But with Microsoft reportedly planning to launch an iOS version of Office next March, Apple is recasting iWork for businesses in order to challenge Microsoft’s Office cash cow, sources told CRN… Apple wants Pages to be seen as a replacement for Microsoft Word, Numbers as a replacement for Excel and Keynote as a replacement for PowerPoint,” one source familiar with the project told CRN.

The publication also added that Apple and VMware are working together on Horizon Mobile for iOS—a solution that allows a partition to be created for personal and business apps and data in BYOD scenarios.

Apple updated its iWork suite of App Store apps in July with iCloud support, bringing synced documents between the iOS and desktop versions. That allows changes made on one device to automatically appear on all your other iCloud-enabled devices. There have been rumors in the past that Apple was working on an entirely cloud-based office suite, but so far the documents in the cloud service have been limited to syncing and downloading documents using the cloud. Apple’s most recent addition to its iCloud service is iOS-like Reminders and Notes web applications.