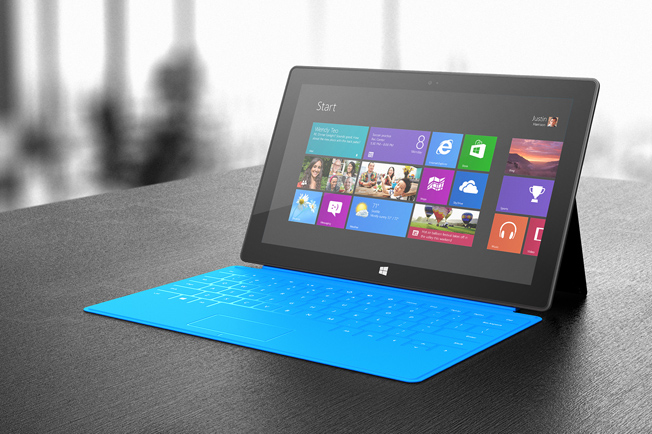 Early reviews for Microsoft’s new Surface tablet have been released this evening, giving us a look at the company’s supposed “saving grace.” According to the pundits who got their hands on it early, things aren’t looking too good for Microsoft. Many are complaining about a lack of apps, awkwardness of the Windows 8 RT operating system, and a buggy platform. It sounds like the iPad will remain unchallenged by Microsoft…for now.

It does the job of a tablet and the job of a laptop half as well as other devices on the market, and it often makes that job harder, not easier. Instead of being a no-compromise device, it often feels like a more-compromise one.

There may be a time in the future when all the bugs have been fixed, the third-party app support has arrived, and some very smart engineers in Redmond have ironed out the physical kinks in this type of product which prevent it from being all that it can be. But that time isn’t right now — and unfortunately for Microsoft, the clock is ticking.

The Surface is full of potential, but until its software performance and apps are as strong as its hardware, I, unfortunately, will still drag both a laptop and an iPad through security.

My 48-year-old eyeballs have no trouble telling the difference between iPad Retina text and the Surface’s ClearType — but overall, the Surface’s screen is one of the best I’ve seen on a tablet.

The screen, incidentally, is 16:9, an aspect ratio designed with Windows 8′s panoramic interface in mind. It lets you see more apps without panning, and is well suited to the feature that allows you to snap a widget-like version of one app on the side of the primary program you’re using. Microsoft thinks Surface buyers will use the tablet mostly in landscape mode; it works in portrait orientation too, although the aspect ratio leaves it looking like a small-but-tall magazine.

In the end though, this is nothing more than Microsoft’s tablet. And a buggy, at times broken one, at that, whose “ecosystem” feels more like a tundra. There’s no Twitter or Facebook app, and the most popular 3rd party client breaks often. The Kindle app is completely unusable. There’s no image editing software. A People app is supposed to give you all the social media access you’d ever need, but It’s impossible to write on someone’s Facebook wall through the People app, Surface’s social hub; the only workaround is to load Internet Explorer. Blech. Something as simple as loading a video requires a jumbled process of USB importing, dipping in and out of the stripped-down desktop mode, opening a Video app, importing, going back into the Video app, and then playing. What.

Yes, keyboard. You know Apple’s magnetically hinged iPad cover? Microsoft’s Touch Cover is the same idea — same magnet hinge — except that on the inside, there are key shapes, and even a trackpad, formed from slightly raised, fuzzy material. Flip the cover open, flip out the kickstand and boom: you have what amounts to a 1.5-pound PC that sets up anywhere.

This is nothing like those Bluetooth keyboard cases for the iPad. First, the Touch Cover is much, much thinner, 0.13 inches, cardboard thin. Second, it’s not Bluetooth; there’s no setup and no battery hit. The magnet clicks, and keyboard is ready for typing. Third, when you want just a tablet, the keyboard flips around against the back. The Surface automatically disables its keys and displays the on-screen keyboard when it’s time to type.

I’ve been waiting a long time for somebody to produce tablets and phones that are lock, stock and barrel better than what Apple’s been making since the first iPhone. Every year, somebody gets closer. Surface doesn’t get close enough. The thing is, Surface is supposed to be so much more than just Microsoft’s iPad alternative, the Other Tablet. It may very well be one day. It has everything it needs to be that. But today it’s just another tablet. And not one you should buy.

Imagine booting up an iPad for the first time, seeing the OS X desktop exactly as it appears on a MacBook, and then finding out you cannot run any OS X software on the device. As odd as that scenario sounds, that is exactly the situation Microsoft is facing with the next-generation Windows OS…

…At 1.5 pounds, the Surface’s weight falls very close to that of Apple’s iPad despite the tablet’s larger display, and Microsoft says that the 10.6-inch display size is perfect for a device that is as much about content creation as it is content consumption.

The Surface RT’s 1.4GHz quad-core Tegra 3 processor and 2GB of system memory handle their workloads without drama. Gesturing through the OS itself is fast and fluid. Ditto browsing in Internet Explorer. Websites load extremely quickly, and when you scroll rapidly down pages, screen redraws have no trouble keeping up…

…Regardless, performance in hard-core applications probably won’t even matter, because the Windows RT desktop is locked down: You will never be able to install Photoshop, traditional PC games, or any other code we typically define as “PC software.”