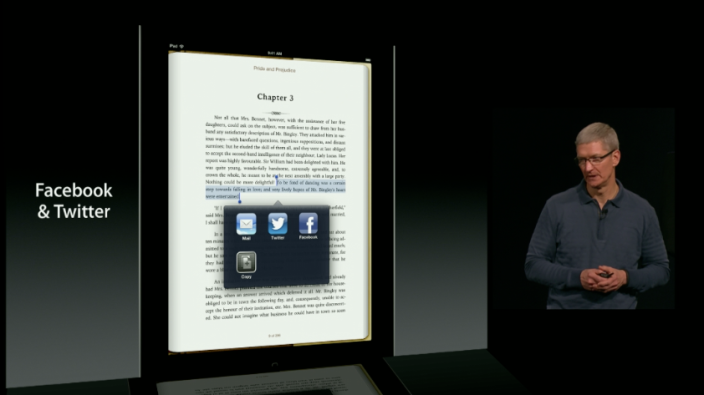 As promised by Apple during its media event this afternoon, iBooks 3.0 is now available for users to download from the iTunes App Store. Haven’t heard? The updated app offers better integration with iCloud, and it now shows purchased books across your iTunes account on one shelf for more seamless reading. Furthermore, the folks in Cupertino have added a new scroll theme that allows users to “scroll vertically through books with the flick of a finger”—infinite scrolling. It’s a feature iPad mini users are sure to love.

Competing with a similar Kindle feature, Apple also made its iBooks platform a bit more social with this update. Users can now share their favorite quote over Facebook and Twitter—a much-requested feature among the more hardcore readers.

Lastly, in the 3.0 update, iBooks grabbed 40 more languages, including: Japanese, Chinese, and Korean. You can grab the update right on your iOS device from the App Store. For you book junkies, Apple also updated its iBooks Author software with new features this afternoon.

• See all your iBookstore purchases in iCloud—right on your bookshelf with iOS 6 • Scroll vertically through your books with the flick of a finger using the new Scroll theme • Receive free updates to purchased books—including new chapters, corrections, and other improvements • Look up definitions for words in German, Spanish, French, Japanese and Simplified Chinese with iOS 6 • Share quotes or thoughts about your favorite book with friends on Facebook, Twitter, Messages, or Mail