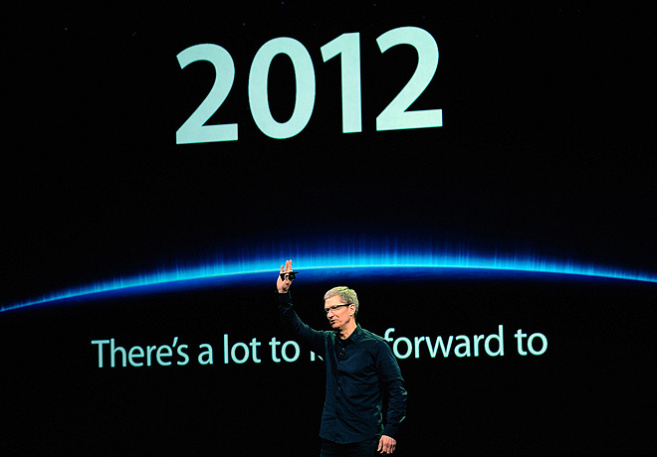 Apple is set to discuss its Q4 2012 earnings on a conference call at 5PM EST. We’ll be following along below, where Tim Cook and co. are expected to talk numbers, iPhone 5 sales, overall company momentum, and more about the iPad Mini, among other topics. The call starts at 2 PM PST /5 PM EST. Apple will throw up the numbers at 4:30 after the market closes. Additionally, we will be covering all the announcements from the financial results call on 9to5Mac.com’s earnings hub. Apple also has an audio stream of the call available on its website. Update: the call has concluded, check out the archive below.

Here’s what analysts are calling for!

4:33 – AAPL is up after-hours following the announcement:

4:59 – Things should be getting underway shortly. We’re rocking out to some classical music.. you know, earnings style.

5:01 – We’re on! CEO Tim Cook, CFO Peter Oppenheimer, and Treasurer Gary Wipfler will be joining us.

-Peter is on the call. “We establish new records for iPhone, iPad, and Mac sales.” Record September quarter.

-4.9 million Macs sold, which is a Sept. record for the company.

-5.3m iPods sold in the quarter. “iPod touch accounted for half of all iPods sold.”

-Talking the new iPod touch and iPod Nano and their specs and new colors. “We think our full range of iPods will be great holiday gifts”

-Peter is talking the new iTunes 11 and its features. Sadly, no release date.

-26.9m iPhones were sold during the Sept. quarter, says Peter. “Customers have responded tremendously to the iPhone 5. Demand continues to outstrip supply, and we’re working very hard to get more into customer hands as quickly as possible.”

-$17.1B in revenue for iPhone and accessories

-14M iPad sold during the Sept. quarter. “iPad sales were ahead of our expectations.”

-iPad and accessories equaled $17.5B

-Peter is discussing how the iPad has benefitted businesses.

-On Maps: “We will work nonstop to make sure Maps reaches are incredibly high standards.”

-18 new stores opened during the quarter

–AAPL is now down on the after hours market.

-94M visitors in stores during the quarter

-$52B of revenue expected next quarter.. which is HUGE.

-125M iPhones sold during the year

-58M iPads sold during the year

-18M Macs sold during the year

-Peter: “Our strongest line product ever.”

Now we’re on to questions…we’ll comment on the notable:

-“Record levels of demand. Strongest iPhone line-up we have ever had.”

-Tim: “We’re dedicated to make the best products in the world..we won’t cut corners. This is the reason our customers choose to buy our products. We’re managing the company for the long run. We remain confident in our strategy. We use our high class skills to please our customers.”

– “The demand for iPhone 5 is extremely robust,” says Tim. “We are in a significant state of backlog. I am pleased with the current amount of output. It;’s difficult to predict when supply and demand will balance.” Tim says he is confident that production will even out.

-On iPad and potential enormous market..and larger tablets (is this analyst alluding to 13-inch?!?):

-Tim: “We continue to be very confident that the tablet market will surpass the PC market… There is an incredible development in ecosystem and product development in the tablet space. It is already extremely compelling for customers to choose an iPad over a PC. Each quarter you see 80 to 90 million PCs being sold… we do think the iPad, iPad mini, and iPad 2 will all be extremely attractive offerings for people in lieu of PCs. We are very, very confident in what we have in the pipeline. We are extremely please to have launched iPad Mini and can’t wait till next Friday when we begin selling the first unit.”

Tim: “I haven’t personally played with a Surface.. what we’re reading is that it’s a fairly compromised, confusing product. The toughest thing you do is trade-off.. deciding what a product should be. I suppose you could design a car that could fly.. I don’t think it would do it well. I think people when they look at the iPad vs other offerings, I think they will choose iPad. I think they’ve done this to date and will continue to do this.”

-On the Apple TV:

-Tim: “August and September rumors intensified. I wish these wouldn’t occur but did occur.”

-Tim: “We now have almost all Fortune 500 companies that are now testing or deploying iPads. We’ve also pushed into the global 500, those numbers are now 80 percent for both iPhone and iPad. I feel we’re doing fairly well there, but there’s much more to do. I’m feeling pretty good about it.”

-iMac will be constrained for the whole quarter, however.

On iPhone 5 launch in China:

-Will occur in December

-“I would not say there’s been a significant change in our supplier partners.”

-No change in LCD driving costs.

“Samsung we continue to be a customer”

-“Comments Steve made before about 7-inch tablets… we would not make one of the 7-inch tablets… we don’t think they’re good products and we would never make one…I’m not sure if you saw our keynote… the difference in just the real estate size in the 7.9-inch, almost 8… when you look at the usable area… its 60 to 70% the iPad mini has the same numb of pixels as iPad 2… you have access to all 275,000 apps… iPad mini is not a comprised product like the 7-inch tablets. It’s in a whole different league”

And it’s over. Thanks for following along! Check out our complete event coverage in our hub.