Review: Languages for iPhone puts offline translation in your pocket 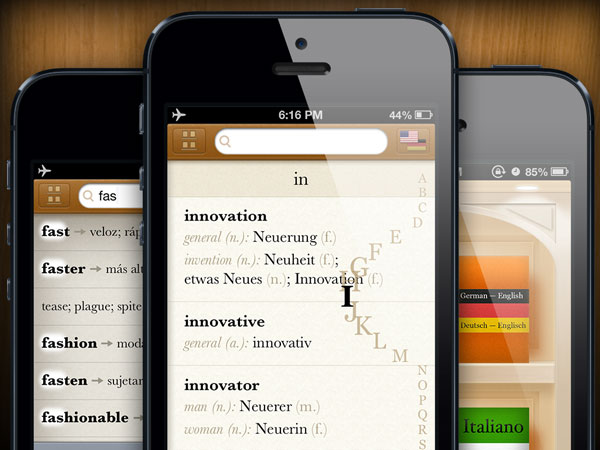 Today SonicoMobile, the creators of iTranslate Voice, released a brand new multi-language translation app for the iPhone. The aptly-named Languages provides translations between twelve different language combinations and sports an iBooks-like interface with a few adjustments for improved usability.

The main menu looks a lot like the bookshelf in the iBooks library, and for the most part, it functions exactly the same way. On the shelves is a collection of dictionaries. Each dictionary translates between two specific languages.

A few of these are already installed when you first start the app, but most of them will need to be downloaded separately for free before you can use them. This is to keep the app size manageable while providing as many translations as possible. The dictionaries download quickly and are only about 16 MB each. Once the dictionary has been downloaded, it can be used at any time regardless of your internet connection.

The dictionaries can be rearranged to your liking by simply tapping and dragging them to a new position on the bookshelf.

The “inside” of the dictionary contains a long index of every word available in that specific language. A button in the upper-right corner allows you to switch between the two languages, and a search bar provides a quick way to find just about any word you could possibly need translated. If gestures are your thing, you’re in luck. Swipe to the right at any time to access the search page, including your previous results.

Each word in every dictionary has a definition as well as ability to tap any of the given translations and jump to that phrase in the opposite language.

On the right side of the screen is what appears to be a typical iOS control: a column of letters that lets you quickly jump down a long list of items. It’s only when you actually put your finger on this control that you realize it’s been tweaked in such a clever way, I’m surprised Apple hasn’t thought of it already.

Typically, when using these indexes in other apps, like the Contacts app, your thumb will cover up part of the list, making it hard to see exactly which letter you’re tapping. In Languages, this list pops out to the left around your thumb, so that you can see exactly what is being highlighted. When you release the list, it presents you with more options for quickly finding what you need by selecting the first two or three letters of the word you’re searching for.

This index column is a perfect example of the thought and design efforts that went into Languages. Everywhere you look, you’ll see little touches that make the app a joy to use. All of the animations are perfectly fluid, and the app is optimized for the iPhone 5 on day one. I have been thoroughly impressed with Languages in the time that I’ve spent using it. I’ve tried every foreign word that I could think of, but have yet to find one this app can’t translate. The robust dictionaries, offline usage, and beautiful design make this the perfect app for anyone who wants quick translations on the go.

Languages is available for $.99 on the App Store.