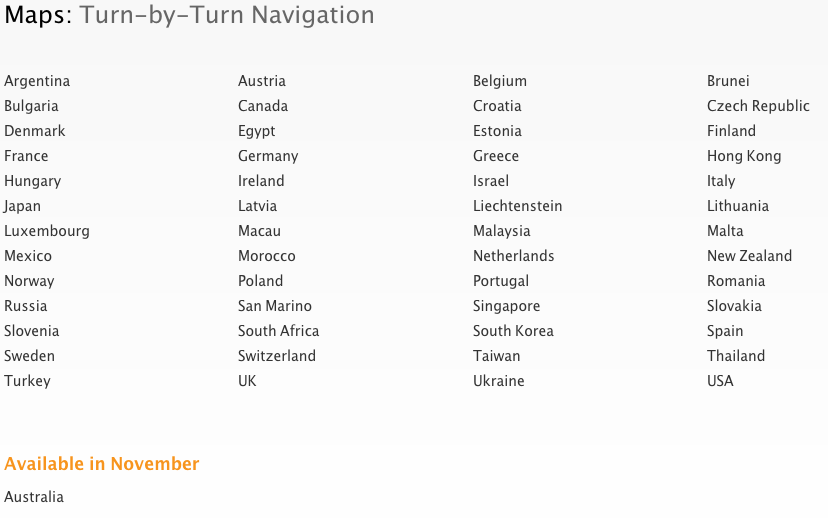 Apple was initially set to release turn-by-turn navigation for Australia sometime this month, however an update to Apple’s Maps availability webpage this evening has clued us in that the launch has been delayed. Apple is now saying the feature will be available in November, just a month after ex-iOS chief Scott Forstall announced that the turn-by-turn feature was in “qualifying stages” for Australia. The Maps feature did launch in Brunei, Egypt, Macau, Malaysia, Morocco, South Africa, Taiwan and Thailand during October — one commenter pointed out below.

We assume the delay comes after the flurry of problems that have plagued Apple’s iOS Maps. In September, CEO Tim Cook issued a public apology for Maps, saying “we strive to make world-class products that deliver the best experience possible to our customers. With the launch of our new Maps last week, we fell short on this commitment. We are extremely sorry for the frustration this has caused our customers and we are doing everything we can to make Maps better.” He went on to recommend alternatives.

It looks like Apple may also miss another October deadline. During its September press event, the company promised the redesigned iTunes 11 by the end of October. Apple has two days to hit its promise. As for Australia users, you may as well rejoice for the delay, as turn-by-turn has lead users to some pretty strange places. It happened to me last week when I was thrown nine miles off course, causing a pesky back-track.