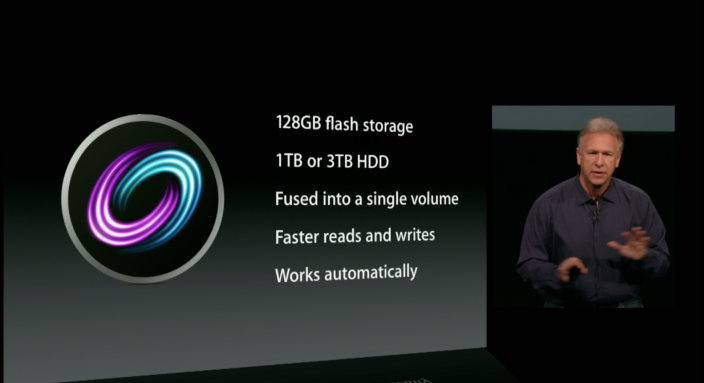 There is still a lot we do not know about Apple’s new hybrid SSD/HDD Fusion Drive option available for the new iMacs and Mac minis. Today we get a little bit of insight into how Fusion Drive will function thanks to a few blog posts by developer Patrick Stein detailing how he was able to build his own Fusion Drive solution on his Mac Pro running 10.8.2 (via MacRumors). Stein was able to get OS X to recognize an attached 120GB SSD and 750GB HDD as a single drive using diskutil and, surprisingly, exhibit Fusion Drive-like functionality with little configuration. MacRumors explained:

Head over to Stein’s Tumblr for all the details. ArsTechnica also has an excellent breakdown of Fusion Drive:

Based on these findings, Fusion Drive is indeed a base operating system feature, either contained within Core Storage or built into OS X 10.8.x (Jollyjinx notes at the bottom that he’s using 10.8.2). It appears that Fusion Drive detects the SSD-ishness of a drive based on SMART info read across the SATA bus, though it’s possible that Apple might be using Microsoft’s SSD detection method and simply testing attached drives’ throughput. If a Core Storage volume contains an HDD and an SSD, Fusion Drive appears to be automatically activated.

Originally released in 1998, the iMac is Apple's…