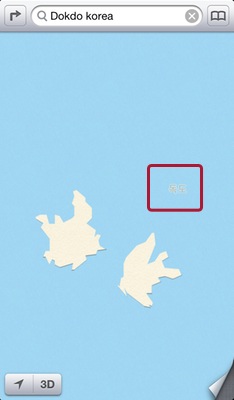 This is not the first time Apple has been asked by government to alter imagery in its new Maps app. Google and others already work with authorities around the globe to obscure imagery of sensitive locations such as military bases. Taiwan wants images of an early-warning radar facility blurred in the app, and the Korea Times (via SearchEngineLand) reported the South Korean government is now requesting changes too:

Korea has protested to Apple Inc. over its new English-language mapping service for the iPhone, which shows both Korean and Japanese names for Dokdo, the South’s easternmost islets, an official said Wednesday… iOS 6 mobile operating software simultaneously uses Korean, Japanese and a Franco-English name, the Liancourt Rocks, to describe Dokdo, which is also claimed by Japan.

“We protested to Apple’s Korean unit that, because Dokdo is clearly an integral part of our territory, the new reference is unacceptable and it should be marked as the Korean name of Dokdo wherever it is searched for,” the official said.

“Although Apple is a private organization, this is an issue that our government cannot concede on. So, we will continue reiterating our stance and requesting Apple to accept our demand,” the official said.

Google also takes the approach of using both the Korean and English names in its Maps, as does Apple for other locations where naming varies by language. That approach isn’t acceptable to South Korean officials.