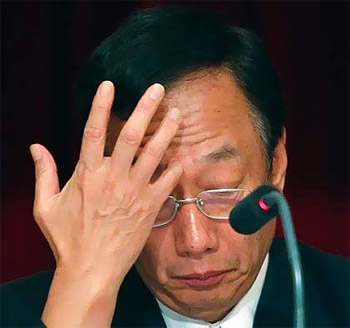 According to a report from Reuters, citing a statement from Foxconn Chairman Terry Gou, Apple’s assembler is having a hard time keeping up with iPhone 5 demand. Gou confirmed previous rumors that the company is indeed “falling short” of meeting supply for iPhones and its other unit, Foxconn International Holdings, is assisting with production:

“It’s not easy to make the iPhones. We are falling short of meeting the huge demand,” Foxconn Chairman Terry Gou told reporters after a business forum.

Following the launch of the iPhone 5, reports claimed employees at Foxconn’s Zhengzhou plant went on strike over quality control concerns and lack of training. The same quality control issues were linked to scratching found out of the box on some iPhone 5 units, but it’s unclear how much these setbacks have contributed to iPhone 5 delays. Another unnamed executive speaking to The Wall Street Journal last month said the iPhone 5 is “the most difficult device that Foxconn has ever assembled. To make it light and thin, the design is very complicated.”

To speed up production of new iPhones, specifically the production of display components, Reuters suggested Apple could provide cash incentives to Sharp, one of its keep suppliers that was thought to have contributed to initial low supplies. Following rumors yesterday that Apple might even be considering making further investments in the failing company, Asymco’s Horace Dediu (via Fortune) speculated today that a $2.3 billion discrepancy in Apple’s 2012 financials might have already went to Sharp:

Asymco’s Horace Dediu has a theory. In a post published Wednesday he points out that there was  a $2.3 billion discrepancy between what Apple said it planned to spend on capital expenditures in 2012 and what it actually spent — $2 billion of which wasn’t reported as cash flow.

Circumstantial evidence points to the asset being production equipment (or even a plant) previously owned by Sharp. Sharp is a key supplier of screens to Apple but is also in financial distress. Sharp has also been the object of an intended investment by Foxconn. That deal fell through as Sharp’s finances deteriorated. My guess is that these attempts to shore up Sharp are directed by Apple to ensure both continuity of supply and a balanced supplier base (offsetting Samsung, another supplier.) If Sharp were to enter into some form of bankruptcy, the key plant(s) used in producing screens for Apple might be “up for grabs” by creditors and they might be taken off-line, jeopardizing Apple’s production capacity, irrespective of contractual obligations. I believe that Apple’s late and unprecedented expenditure was to secure this asset. I further believe that the financing for this deal was done through a swap of “pre-orders”. Stepping even further into the hypothesis: Apple arranged to move a Sharp screen production line onto its books and “paid” for it through a pre-payment of components. This being a pre-payment it would be in the form of an “off balance sheet” commitment. Apple reported that “As of September 29, 2012, the Company had outstanding off-balance sheet third-party manufacturing commitments and component purchase commitments of $21.1billion” [my emphasis]. This is a significant increase from earlier years and allows for a huge “slush fund” to cover asset swaps.