Microsoft Office for iOS and Android shows its face, release in early 2013 for iOS first 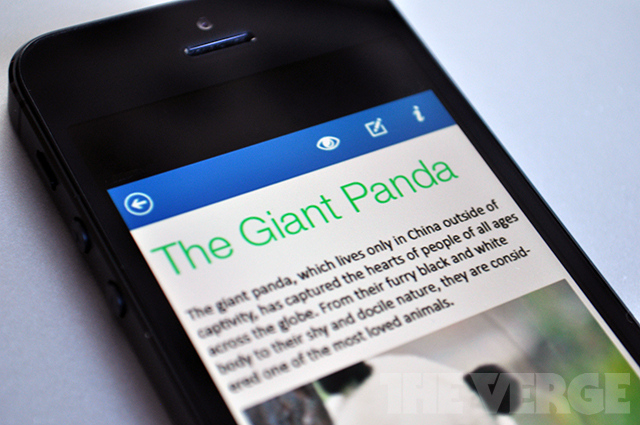 The Verge has what it says are previews of Microsoft Office for the two platforms that own 90 percent of the smartphone and tablet markets.

The Verge has learned through several sources close to Microsoft’s plans that the company will release Office versions for Android and iOS in early 2013.

Office Mobile will debut in the form of free apps that allow Android and iOS users to view Microsoft Office documents on the move. Like the existing SkyDrive and OneNote apps, Office Mobile will require a Microsoft account. On first launch, a Microsoft account will provide access to the basic viewing functionality in the apps. Word, PowerPoint, and Excel documents will all be supported, and edit functionality can be enabled with an Office 365 subscription.

The report notes “Very basic editing” will be enabled on the apps, but it doesn’t sound anywhere near the functionality of iWork apps or even Google’s Docs in their current forms. Folks should expect iOS apps in late February and Android versions a month or so later, and you’ll need to pay for an Office 365 plan.

There have been many rumors on the iOS version of Microsoft Office throughout the years, including a job posting in July.

Microsoft sort of confirmed the news, saying, “Office will work across Windows Phone, iOS and Android.”

Is this too little, too late from Microsoft?