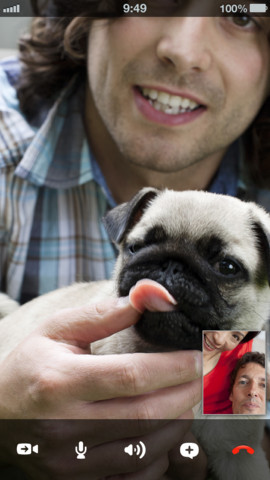 Skype for iPhone version 4.1.2: The Skype iOS app finally gets official support for the iPhone 5’s taller display this morning:

Overgram: Creators of the Over iPhone app for adding creative typography to photos and sharing them on Facebook, Twitter, Tumblr & Instagram is out today with a free version of the app called Overgram. The free version provides 10 of the 225 fonts found in the paid Over version.

In only a few seconds you can add captions, quotes, jokes, memes, poems or anything else you can think of to a photo… STUNNING FONTS: We ♥ typography! We carefully selected 10 amazing fonts that will make your photos beautiful and engaging.

We’ve added Track Your Grub functionality to select restaurants, and, well…it is what it sounds like – we let you know where your food is, from the minute the restaurant gets to work on your order until it’s headed to your door. For some restaurants, you’re even able to chart your delivery on a map as it sails towards your location in real-time. Whoa…Oh, and we now play nice with your new iPhone 5. Because really, who doesn’t want an extra half-inch of search results?

– iPhone 5 support (Tallboy)
– Bug fixes and improved support for iOS 6
*iOS 4.3 is required for this update

Adobe Photoshop Elements half off ($49.99) in box or download