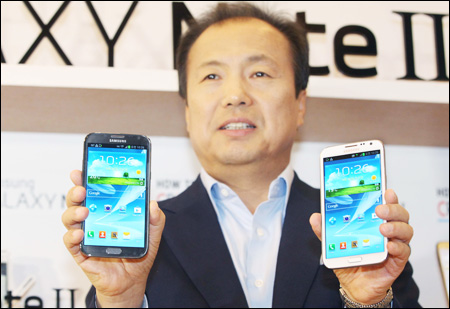 Yonhap News reports that Samsung doesn’t plan to follow the same route that rival HTC did in settling its patent disputes with Apple.

“It may be true that HTC may have agreed to pay 300 billion won (US$276 million) to Apple, but we don’t intend to (negotiate) at all,” Shin Jong-kyun, who heads the South Korean tech giant’s mobile and IT division, told reporters.

The figure is an estimate based on an analyst prediction of $6 to $8 per phone, which may or may not be accurate. The news would seem to be in stark contrast to some predictions that the HTC settlement would “create a blueprint from which other Android manufacturers could settle with Apple”. It also could simply be Samsung playing hardball.

Samsung is now the world’s largest patent holder and smartphone manufacturer with some estimates putting its last quarter sales units around double of Apple’s.

Update: AFP was also there and quotes:

“We have no such intention,” J.K. Shin, the head of Samsung Electronics’ mobile unit, told reporters on Wednesday when asked if Samsung would seek a similar settlement.