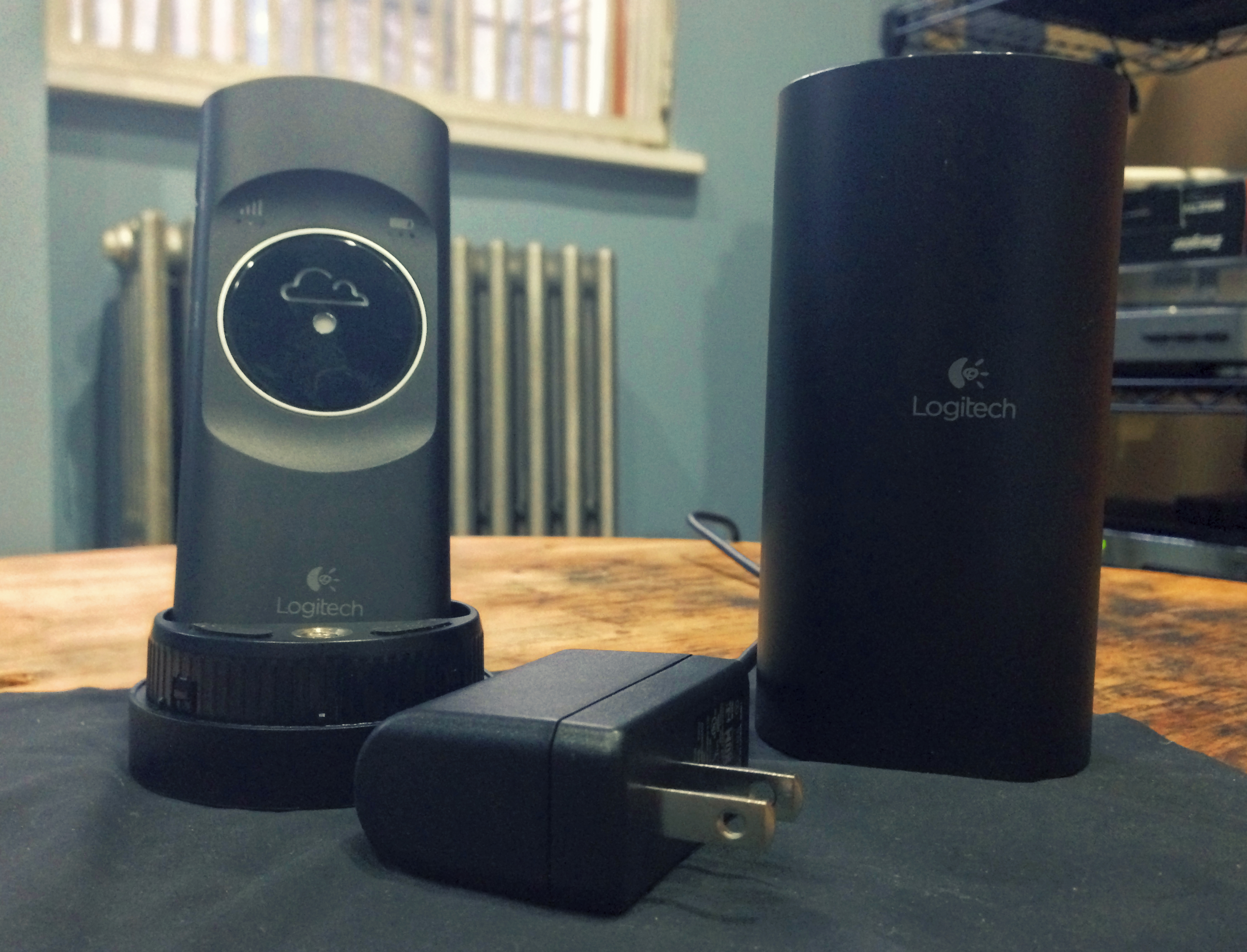 Logitech announced its 720p HD Wi-Fi Broadcaster webcam that wirelessly transmits to any Mac, iPhone, or iPad just last month, and we at 9to5Mac were able to get our hands on a review unit and have been testing it thoroughly over the last few days.

The webcam is specifically geared toward “video professionals, bloggers and hobbyists,” as it allows instant live streaming with Ustream and gives users the ability to toggle between the device and their computer’s built-in camera for second-angle POV shooting. The webcam is further compatible with most popular Mac video applications, such as QuickTime, PhotoBooth, iMovie, FinalCut Pro, FaceTime, iChat, Skype, etc., and it transmits from up to 50 feet away. Oh, and it comes with a plastic carrying case that doubles as a stand.

For more than the basic spec rundown above, check out the video and hands-on review below. Then, when you’re done, pick one up at Amazon for $199—you will not be disappointed. The Broadcaster is an ideal Christmas gift for any loved one or friend who is heavy into vlogging, YouTubing, live streaming, or even podcasting with Google Hangouts.

The hands-on review and gallery are below.

Design
I love, love, love the design of the Logitech Broadcaster. While it is not a typical webcam form factor, it is still extremely functional and, well, gorgeous. The black camera is slightly smaller in length and width than the iPhone 5, and it features a lens and lamp in the front, mode and lamp buttons on the side, power button and micro-USB port for charging and setup on the back, and a magnetic bump on the underside that pairs with its like-wise magnetic stand. Oh, and the topside has a large capture button with Wi-Fi signal strength and battery-level indicators. This gadget feels solid and well built, while the plastic hard shell is matte and smooth to the touch. Logitech did not cut corners when manufacturing the Broadcaster.

As for the cylinder-esque hard plastic stand that doubles as a carrying case, well it sports a magnetic divot at the top that seamlessly pairs with the Broadcaster’s magnetic bump. It is easy to adjust and maneuver the Broadcaster to different angles, as the black stand holds it steady. The stand’s lid also flips over and serves as a dock for the Broadcaster, and it sports a screw input for an entire tripod assembly. This multi-functional case/stand/dock/potential tripod mount is amazing. Logitech certainly thought outside of the box and tried to offer buyers an all-in-one device with this design. 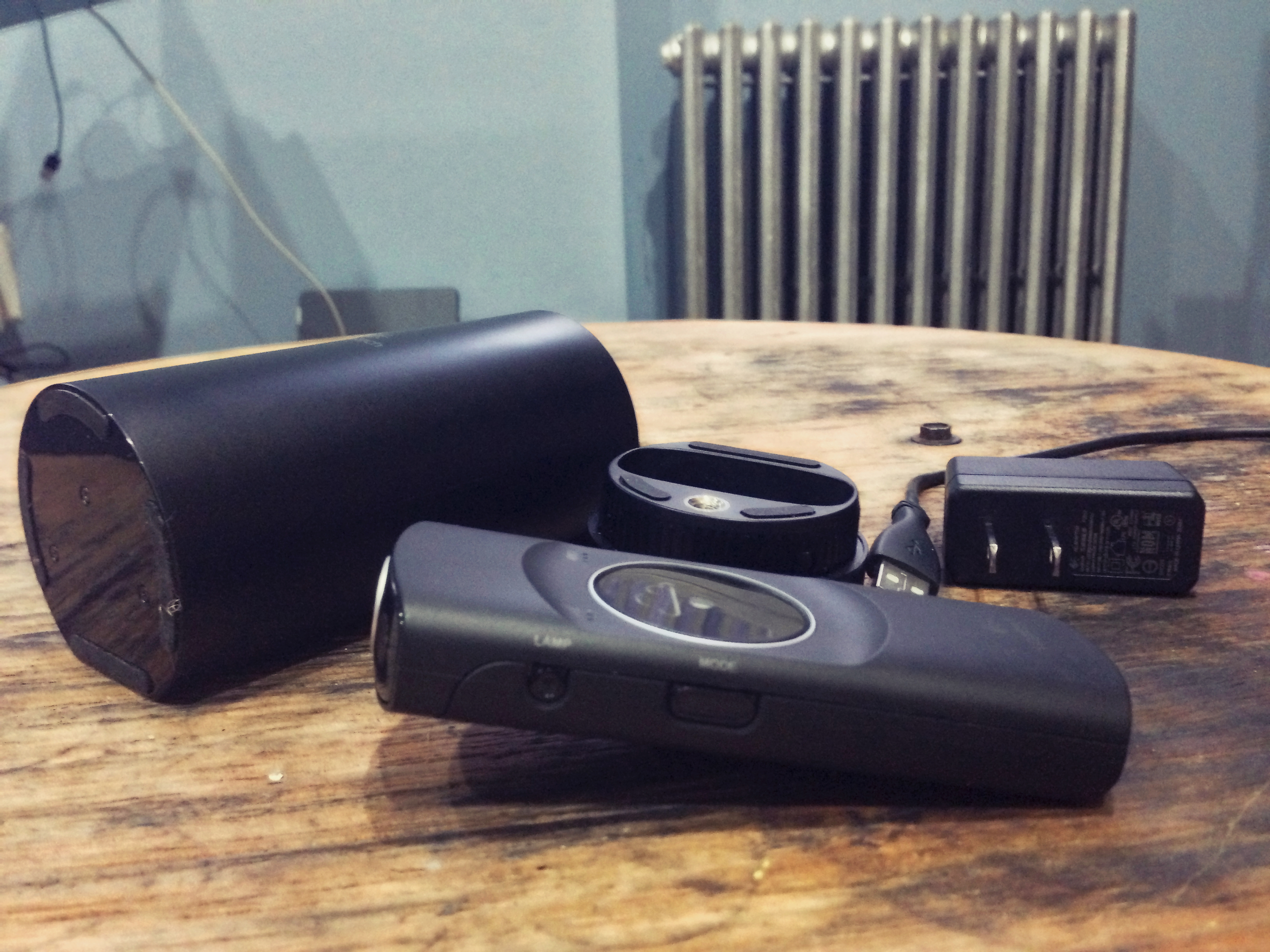 Mac and iOS apps
The box packs the Broadcaster, cylinder stand, USB/AC charger, and, of course, instructions. The instructions direct users to download the Logitech Broadcaster app for either Mac or iOS.

Once installed on the Mac, the app begins to set up the camera for use. I initially tested it on a MacBook Pro. After turning the Broadcaster on, I named the camera and then entered my Wi-Fi password. I also had to pair the Broadcaster with a QR code that Logitech displayed by pointing the camera at it and pressing the capture button. After it verified with a beep, the Broadcaster was ready to use with my laptop.

To set up Ustream on a Mac, make sure the Broadcaster is on, but not in use, and then connect it via the Broadcaster’s icon in the top menu bar. From there, open the installed Broadcaster app. A menu gives two options for either Ustream or record to the computer. If you select Ustream, the app will prompt you to either sign in or create a Ustream account. The Ustream layout features a live stream view with digital 3x zoom and pan/tilt, broadcast link and sharing options, battery-life indicator, start/stop button for recording, channel page access, and social stream and chat integrations.

In recording mode, users can snap stills with the Broadcaster, toggle between the Broadcaster, iSight camera, and dual-view mode—for recording with both the Broadcaster and iSight camera simultaneously in second-angle POV shooting, refine video gain and exposure under Tools, and change sound input under Settings. A preview bar at the bottom also allows users to see tiles of recordings and select videos for watching. The app further automatically saves all recorded videos to the camera’s folder in your Mac’s Movies folder, and it saves dual-view mode videos separately. Just open both videos in iMovie or a similar app to stitch them together.

To set up Ustream on iOS, make sure the Broadcaster is on, but not in use, and then open the installed Broadcaster app. A menu gives options for either Ustream, record to the computer, or watch local recorded videos with the Broadcaster. Once you select Ustream, like the Mac version, the app will prompt you to either sign in or create a Ustream account. From there, Ustream opens with only a live-stream view, broadcast link and sharing options, battery life indicator, and a start/stop button for recording. 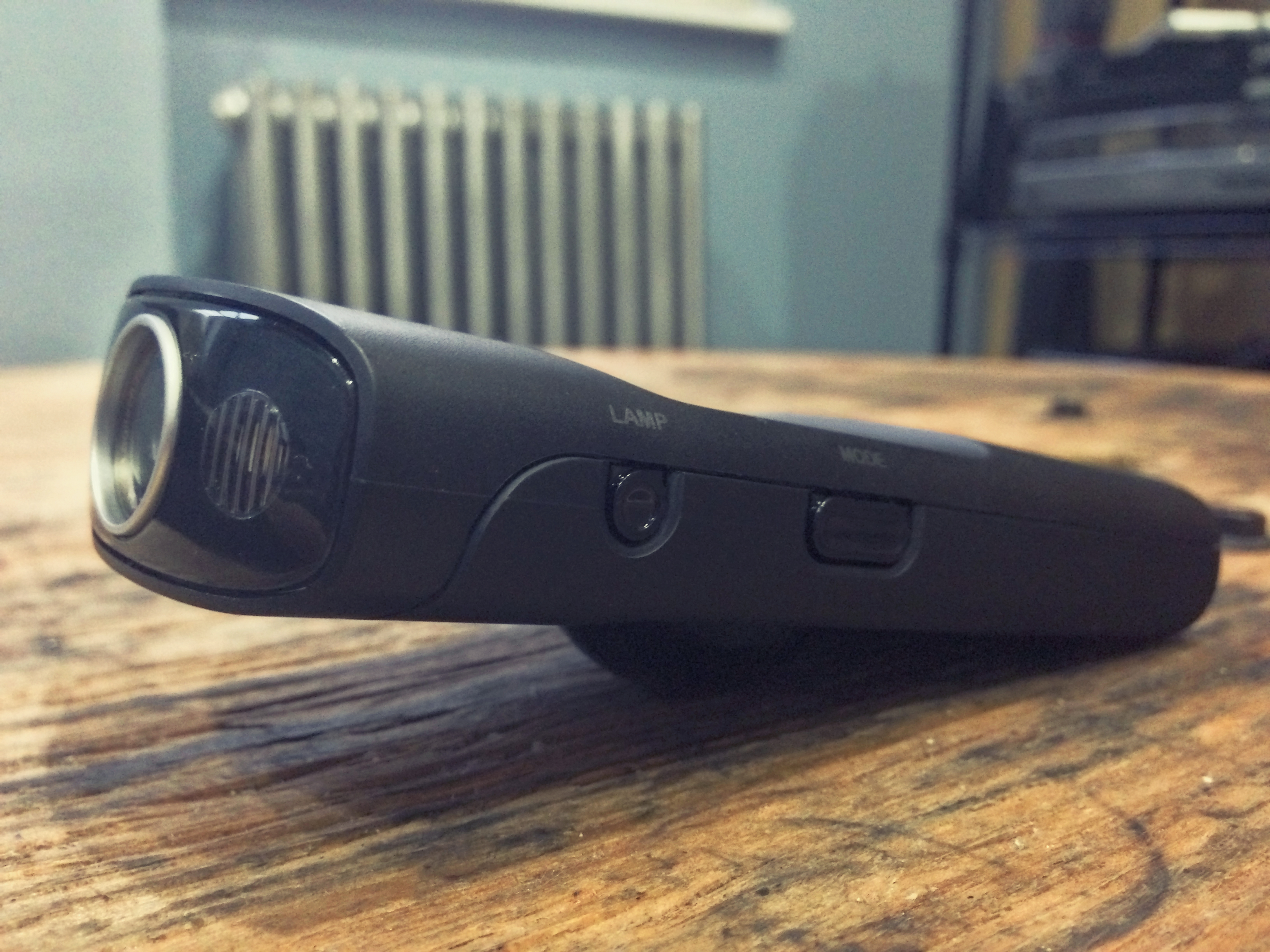 Ustream
Logitech advertised Ustream support through both product marketing and packaging for the Broadcaster. For those unaware, Ustream is a streaming-video service. Ustream broadcasting with the Broadcaster does not require a Mac or iOS device; that is to say, as long as you’re in range of a configured Wi-Fi network. Simply turn on the Broadcaster and then press the capture button, and you’re live. Obviously, in this instance, you cannot see yourself, but it allows for on-the-go vlogging. The mode button is for broadcasting to Ustream only, as well.

I tested Ustream and thought the connection and video quality was excellent via the Broadcaster and my MacBook Pro, fourth-generation iPad, and iPhone 5. It even faired well during high-network traffic; I fired up Netflix on my Apple TV and continued to stream on my Mac over the same network without even a hiccup.

It is worth noting that I tested the Broadcaster in Google Hangouts, as well, during a 9to5Mac Hangout. Hangouts automatically set my default camera to the Broadcaster, so I had to go to Hangout Settings to manually change it back to my iSight camera once finished. But, in case you are wondering, the Broadcaster worked perfectly during the 9to5Mac Hangout. It also played nicely with Facetime, iChat, Skype, and PhotoBooth. 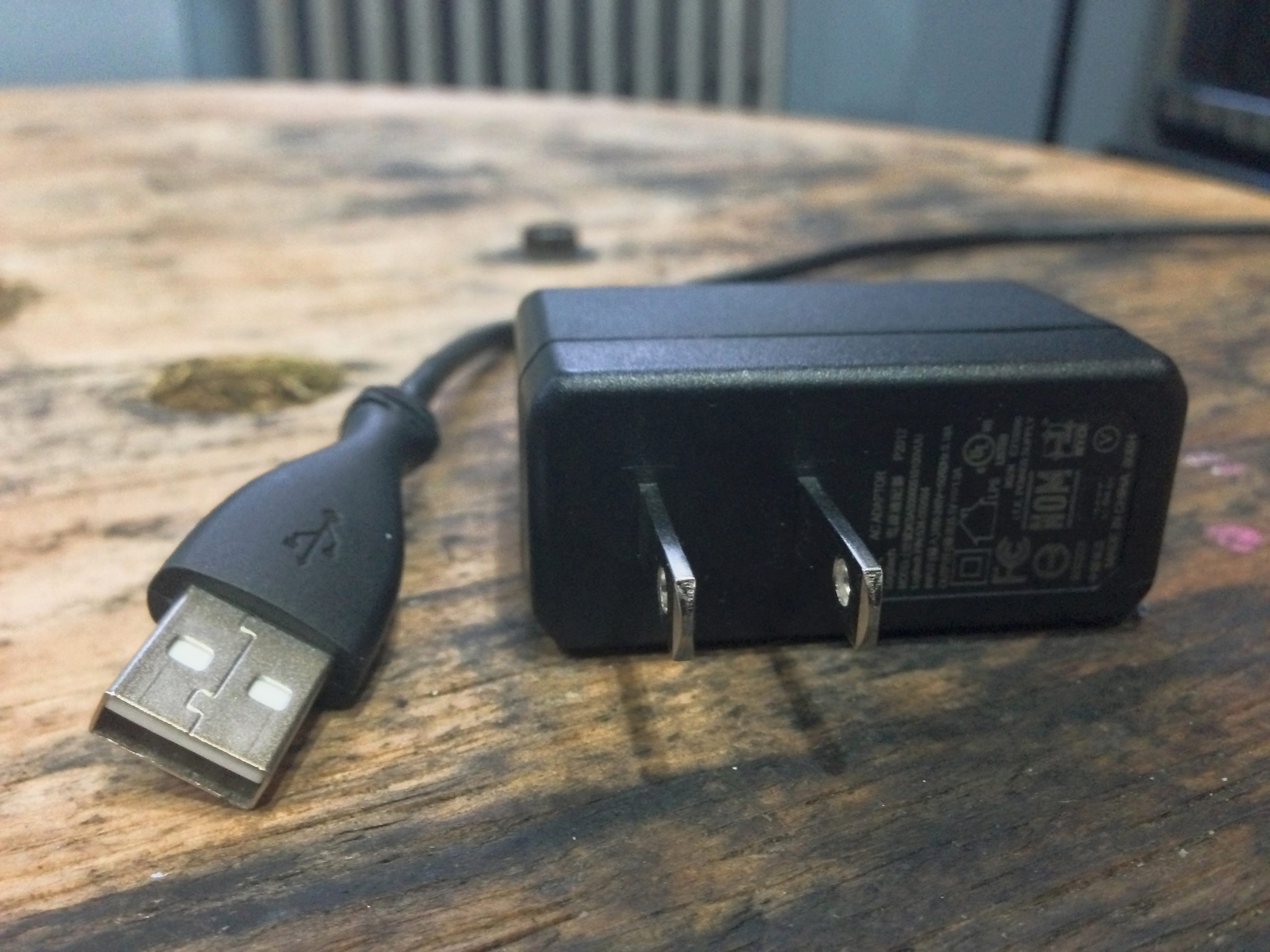 Battery, Video, and Audio quality
Video streaming is available in 360p, 480p, or 720p resolution, but regular recording shoots at 720p HD with H.264 video compression. I tested 720p heavily and found the quality to be impeccable. Of course, lighting is the key to any great video. Vloggers with a soft-box setup (such as the Fancierstudio 3000 Watt kit via Amazon) and this webcam will find themselves publishing professional videos without any need for after-effects or enhancements.

As for audio, the built-in mono microphone picked up my voice without any distortion or too much background noise. However, musicians and the like will probably want to set up a more accurate mic system for recording multiple instruments more precisely.

Now, the battery: the Broadcaster has a two-hour battery life, but I got three hours between playing with the device, live-streaming, and remote recording. That’s good for heavy use, eh?

Overall
The Broadcaster and the iOS app are revolutionary for mobile vloggers. This setup is ideal for folks who want to broadcast at events or conferences or even YouTube publishers who want to do more than sit in front of a stationary webcam in their living room. With that said, Mac mini users or anyone without a built-in Facetime HD camera would also love the Broadcaster.

The $199 price point might seem a little hefty, but the functionality, quality, and versatility of both the Broadcaster and Logitech software are more than worth every penny.