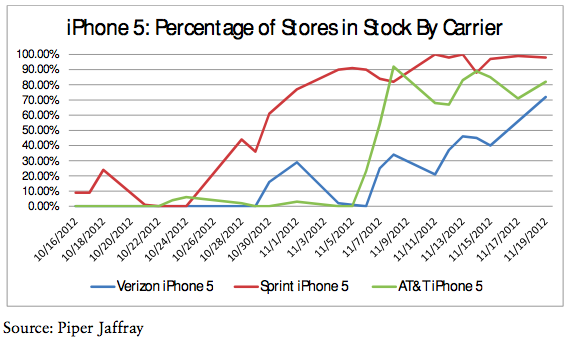 Apple recently changed shipping times for iPhone 5 from “2-3 weeks” to two weeks for orders from its website, indicating the company is starting to iron out production delays and catch up to demand. Today, Piper Jaffray analyst Gene Munster noted checks of 100 App Stores show supplies of iPhone 5 are increasing through Apple’s retail stores, as well (via Fortune). According to Munster’s checks, iPhone 5 is currently available in 92 percent of Apple Stores for Sprint, 82 percent for AT&T, and 72 percent for Verizon:

AT&T and Verizon have shown dramatic improvements in availability, while Sprint has maintained consistent availability. Last night, our checks indicated that Sprint phones were in stock at 92% of Apple Stores, AT&T was available at 82% of stores and Verizon at 72% of stores. Additionally, we note that wait times for online phone orders dropped to two weeks as of today.

Munster said he believes “within the next two weeks that customers will be able to purchase iPhone 5s at Apple Stores same day,” which is obviously great news for Apple and consumers leading into the holidays.