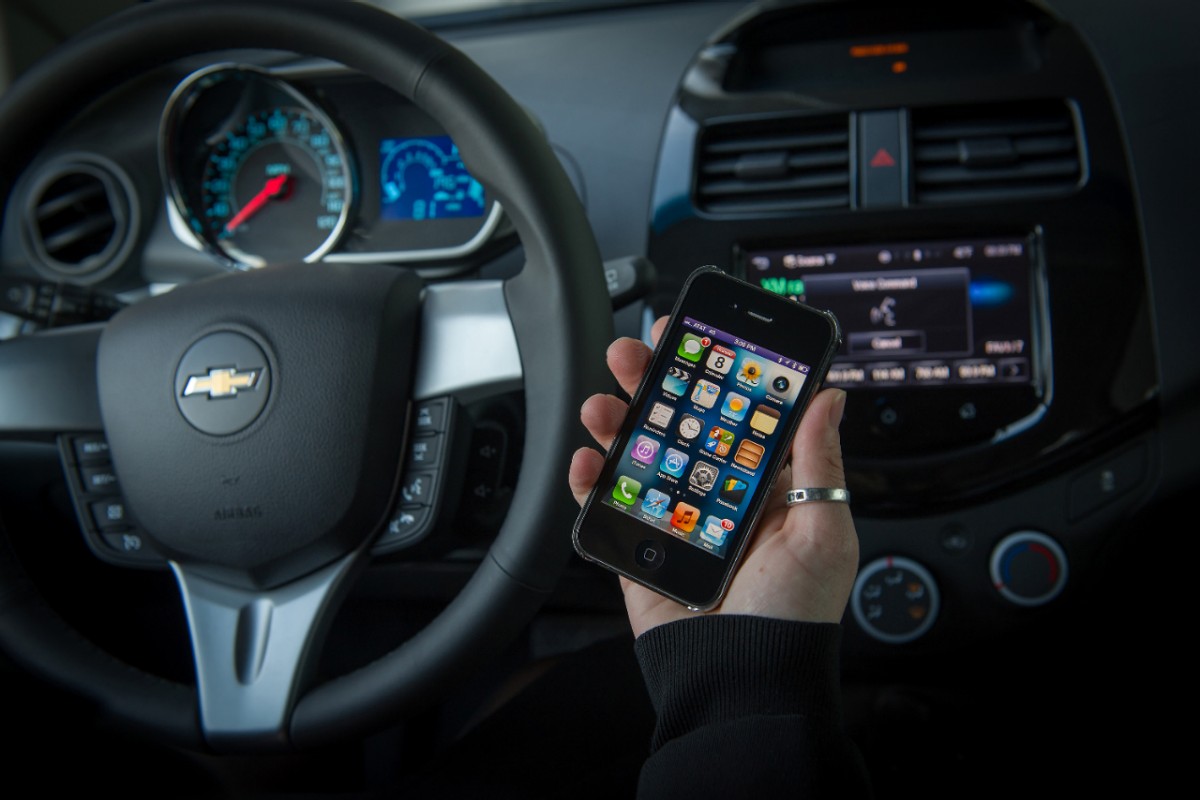 During its opening keynote at WWDC, Apple announced Siri would gain an all-new “Eyes Free” feature as part of iOS 6. After five months of quiet about the feature, General Motors announced this morning that it would be the first of nine automakers previously outlined to adopt Eyes Free in its vehicles starting early next year. Of its fleet, the Chevrolet Spark (1LT, 2LT) and Sonic LTZ and RS will be the first.

Eyes Free lets automakers include a button on their automobiles that allows drivers to initiate Siri for sending messages, making calls, setting reminders, launching apps, and accessing a slew of information from inside of the car without picking up the device.

GM will include the Eyes Free feature on the automobiles, but it still won’t do away with its Chevrolet MyLink info-tainment system. However, if an iPhone 4S or iPhone 5 enters the car running iOS 6, they can connect over Bluetooth with GM’s MyLink radio feature. From there, they can use the Eyes Free steering wheel button to access information. Additionally, the screen won’t light up to minimize distraction. Shown off in the gallery below:

“It says a lot about our commitment to small-car customers that Chevrolet has announced that Siri Eyes Free capability will be available in the Spark and Sonic well before the luxury brands,” said GM Marketing Director Cristi Landy. “Safe, easy, reliable and portable connectivity is a top priority for our customers, and Siri complements MyLink’s existing capabilities to help deliver an incredible driving experience.”

The other nine automakers announced as partners include BMW, Mercedes, Land Rover, Jaguar, Audi, Toyota, Chrysler, and Honda. We will look out for when more information becomes available over the next year.

LOS ANGELES – Early next year, the Chevrolet Spark (1LT, 2LT) and Sonic LTZ and RS will integrate Siri, the intelligent assistant that helps get things done just by asking. Chevrolet made the announcement today at the Los Angeles International Auto Show.

Through the cars’ standard Chevrolet MyLink infotainment system, customers with a compatibleiPhone* running iOS 6 can direct Siri to perform a number of tasks while they safely keep their eyes on the road and their hands on the wheel. To further minimize distraction, Siri takes hands-free functionality even further with an Eyes Free mode that enables users to interact with their iPhone using nothing more than their voice while keeping the device’s screen from lighting up.

Owners simply connect their iPhone with the MyLink radio via Bluetooth, pair with the system, and use the steering wheel voice activation button to begin and end sessions with Siri in Eyes Free mode.

In the Spark and Sonic RS, owners can use Siri in Eyes Free mode to:

“It says a lot about our commitment to small-car customers that Chevrolet has announced that Siri Eyes Free capability will be available in the Spark and Sonic well before the luxury brands,” said Cristi Landy, Chevrolet marketing director for small cars. “Safe, easy, reliable and portable connectivity is a top priority for our customers, and Siri complements MyLink’s existing capabilities to help deliver an incredible driving experience.”

Both the Spark and the Sonic also come with six months of OnStar’s premium Directions and Connections service. OnStar brings added safety, security and connectivity to these vehicles, including services such as Automatic Crash Response, Stolen Vehicle Assistance, Vehicle Diagnostics and Roadside Assistance.

Most smartphone owners can also download the RemoteLink Mobile App, which allows OnStar subscribers to control and manage certain vehicle functions from their phone. For more information on OnStar’s services, visit onstar.com.

Founded in 1911 in Detroit, Chevrolet is now one of the world’s largest car brands, doing business in more than 140 countries and selling more than 4 million cars and trucks a year. Chevrolet provides customers with fuel-efficient vehicles that feature spirited performance, expressive design and high quality. More information on Chevrolet models can be found at www.chevrolet.com.