Review: Fantastical for iPhone, the calendar upgrade iOS 6 is missing 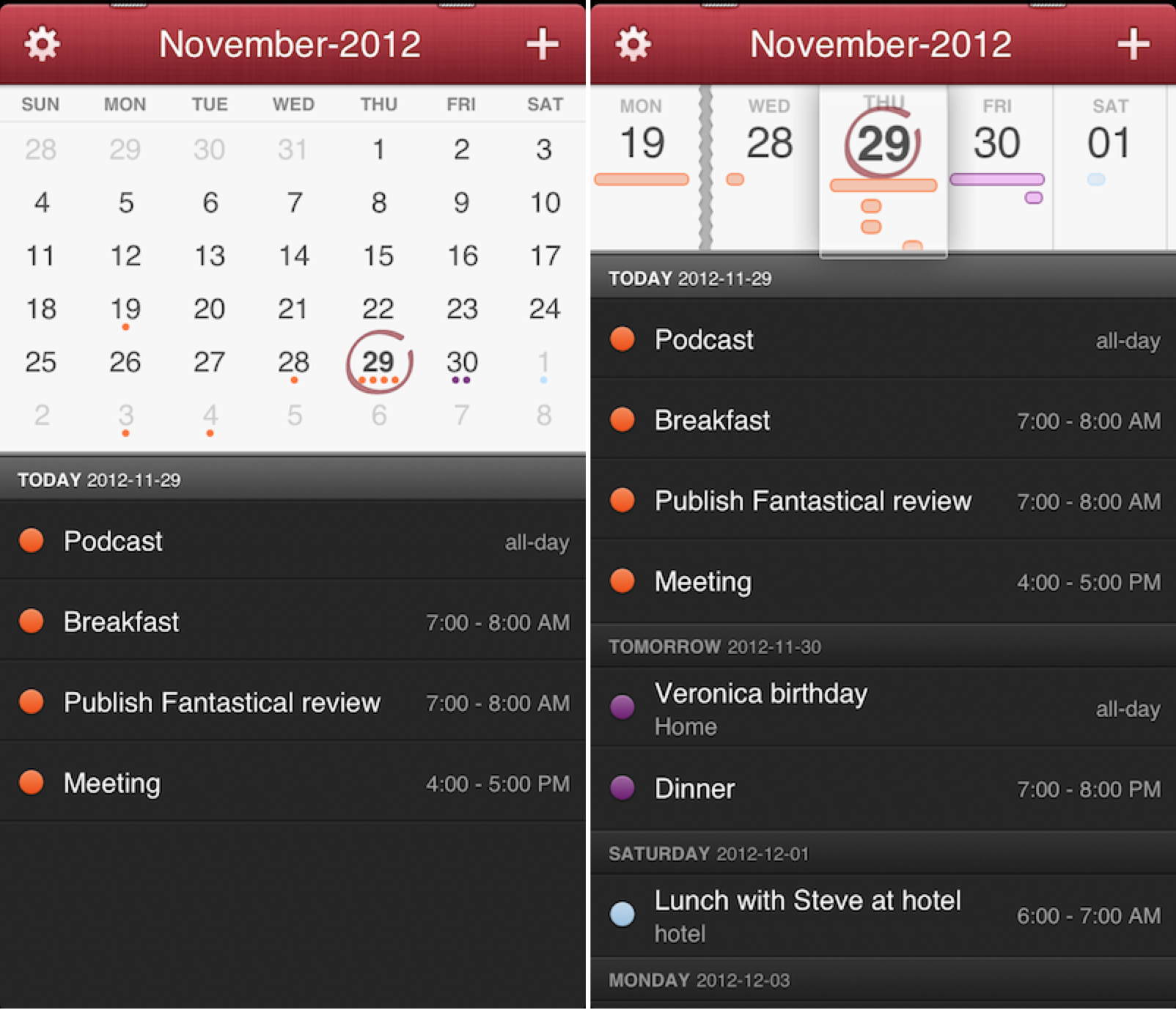 Flexbits, makers of the popular Fantastical Mac app, launched an iPhone version of its streamlined calendar app this morning with the goal of bringing the simplicity and user-friendly experience it has become known for on the Mac to iOS users. The new Fantastical app might not be as feature-filled as other third-party calendar iOS apps, but what it lacks in features it certainly makes up for in style. After a week with Fantastical for iPhone, I can confidently say the app feels like the calendar upgrade iOS 6 was missing.

One thing I love about the Fantastical Mac app compared to other calendar apps, and even Apple’s own Calendars app on OS X, is the overly simple UI. Better yet is the app’s natural language parser, allowing users to enter a sentence such as “lunch tomorrow” to automatically schedule a lunch meeting for noon the next day. While Fantastical for Mac users will feel right at home with a familiar interface to the desktop menubar app, the introduction of a touchscreen also brings a big new feature to the Fantastical UI: the DayTicker…

As pictured in the screenshot above, the app is split into two main sections: the DayTicker on top and a list of events on a dark background below. Fantastical will pull from your iCloud calendars, so you’ll essentially have everything you have access to in the stock iOS calendars app, including, for instance, Google calendars if you have them synced. 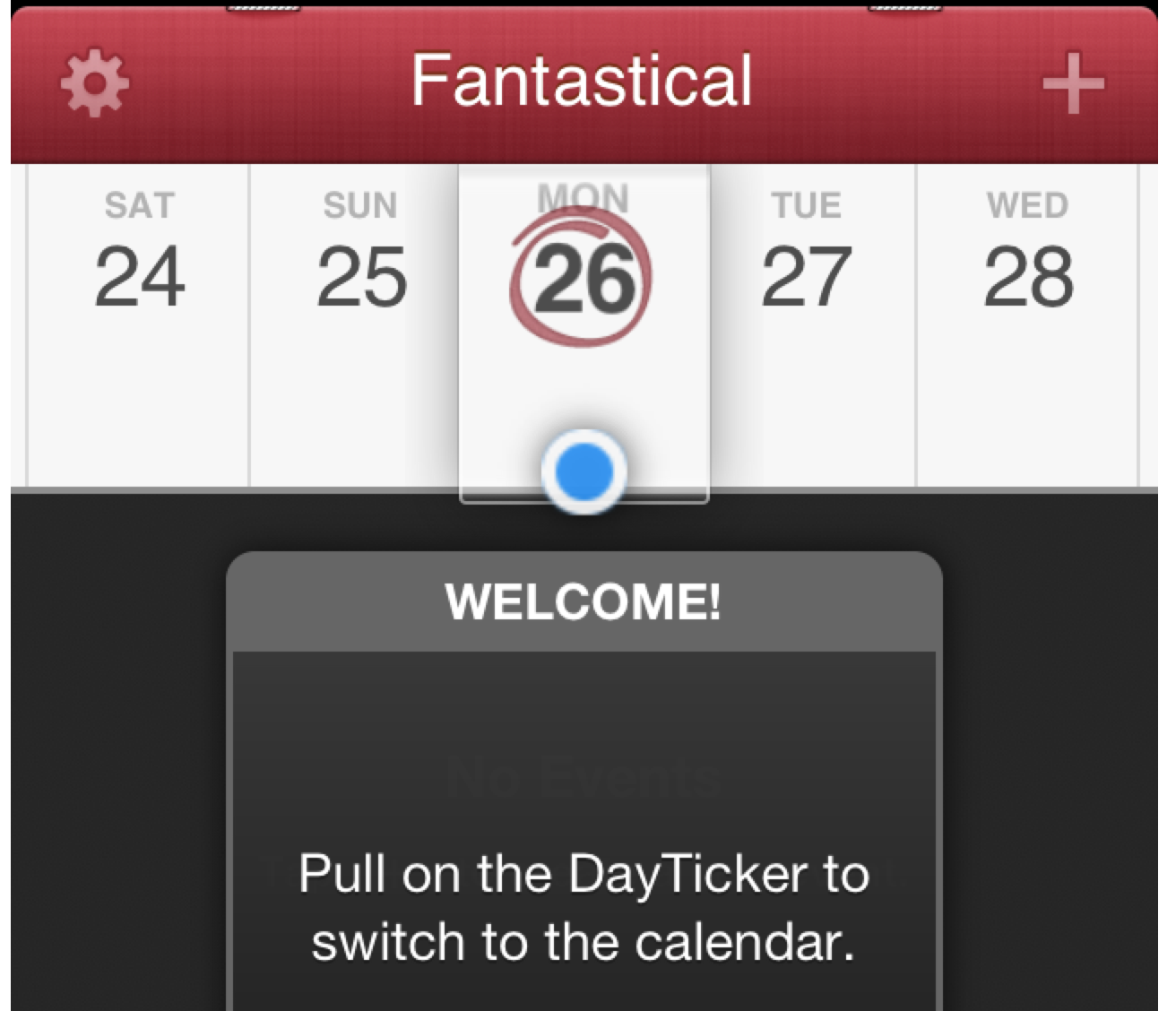 Rather than simply being able to scroll up and down the list of events, the DayTicker is a row of tiles running along the top of the app that allows you to swipe through the days of the week and month. The events viewable in the list below correspond to the currently selected day in the DayTicker. Much like when you run your finger down the alphabet along the side of the Contacts app on iOS, DayTicker provides a visual cue when navigating through a month’s worth of events.

While you can scrub through the DayTicker to bring events for a specific day into focus in the events list below it, you can also scroll up and down the events list itself to view upcoming and past events. Doing so will also move the DayTicker, but tapping the app’s top bar will bring focus back to the current day.

As you can imagine, having to flip through many days or weeks and view/edit events in the future might not be best suited to the DayTicker. For this, Fantastical lets you pull down on the DayTicker, using a familiar pull-to-refresh gesture, to expose a full month calendar view.

New events can be created at any time by tapping and holding down on a day in the DayTicker or full month view (and by tapping the “+” in the upper right corner.) You’ll also notice the events, like in the stock calendar app, are color-coded. This features comes in handy even more when inside Fantastical, however, as the color coded events also appear on the DayTicker to give you a visual idea of how busy any particular day is while swiping and scrolling through.

If the DayTicker and slick UI aren’t the best features of Fantastical, it’s probably Flexbit’s natural language engine. Users of the Mac app are well aware of the feature. This is how it works. Instead of having users fill out all the details when creating the event, users are prompted to enter just a sentence…

The user enters a natural phrase, such as “Publish new blog post (don’t break embargo) at 7am,” and the app’s parser engine automatically creates an event titled “Publish new blog post” scheduled for 7 a.m. iPhone 4S, 5, and fifth-gen iPod touch users will also be able to enter their event with voice thanks to Dictation. The app with also detect a few languages other than English, including: French, German, Italian, and Spanish.

Typing the same phrase into Apple’s calendar app gets you an event titled “Publish new blog post at 7 a.m.” but scheduled for, in my case, 1 a.m. The Fantastical engine also seems to notice potentially important keywords such as “publish” or “birthday” and automatically applies alerts accordingly.

Perhaps a better example is with this phrase: “Pick up kids at 4 p.m. tomorrow.” Rather than simply creating an event with that title for the selected day, Fantastical detected the word “tomorrow” and instead scheduled an event titled “Pick up kids” for 4 p.m. the day after today.

Of course, you can at any time —and at the time of creating an event—edit these details manually. The app will let you pick alerts, such as “day before” or “5 minutes before”, set repeat events for daily, weekly, bi-weekly, etc., and assign the event to a specific calendar (i.e., work or home), location, and attach notes. In other words, the same options provided when creating events in Apple’s stock Calendar app. However, after using the natural language method of entering new events, going back to manually filling out each section in the Calendars app feels frustrating—to say the least. 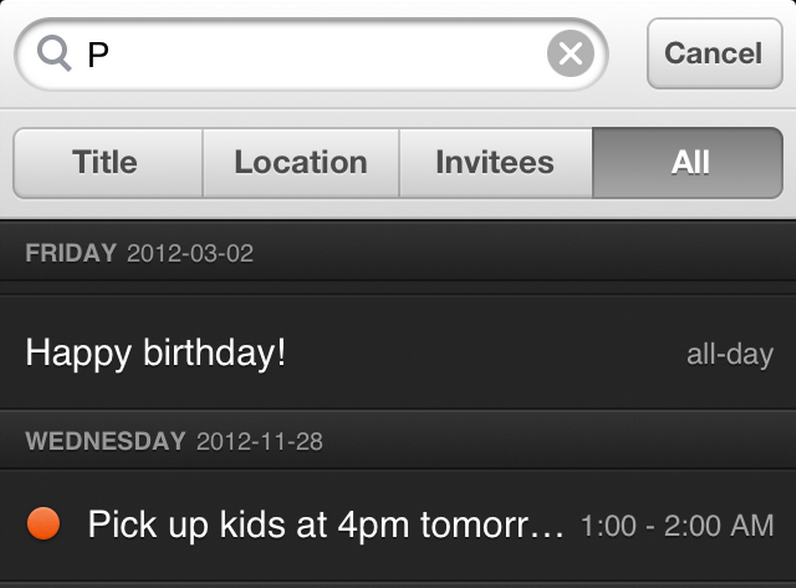 While pulling down on the DayTicker will let you access the calendar view (and vice versa), the same motion with less force will reveal a search bar. From within search you have a few filters: Title, Location, Invitees, and All. Search results are provided with a list of events, allowing you to jump to and edit details for an event with a tap.

The natural language engine isn’t perfect, sometimes requiring exact spellings and grammar to parse the info correctly, but it worked for 95 percent of phrases I entered in my tests. One thing that Fantastical is missing is Reminders—a feature that users of the Mac app have come to appreciate. A dedicated iPad version is also not available at launch. Compared to other calendar apps on the App Store, which often try to cram in to-do list functionality, sharing features, and Facebook integration, Fantastical is definitely lightweight. But, that’s also a big part of its charm.

At the end of the day, this is just a calendar app. It doesn’t make a point of going beyond the functionality of Apple’s own built-in iOS calendar. However, with the innovative sliding DayTicker and gestures, Apple’s calendars app quickly feels dated in comparison. iPhone 5 users will also appreciate that Flexbits paid attention to the iPhone 5’s larger display, providing a longer list of events than Apple’s Calendar iOS app. Fantastical truly feels like the simple, gesture-based calendar app Apple should have made for iOS 6.

Fantastical for iPhone is now available on the App Store for a half-off introductory price of $1.99, and we definitely recommend checking it out.