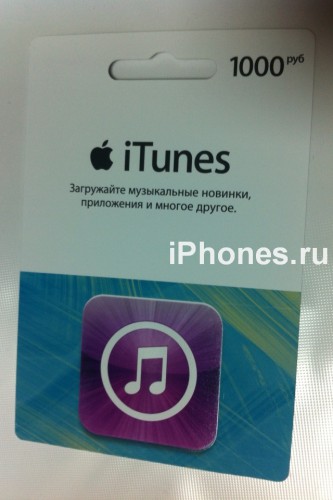 Update: Apple has now confirmed that the iPhone 5 will launch in Russia on December 14. iPhones.ru posted images of the Russian iTunes gift cards pictured right.

Hot off the heels of the iTunes 11 launch last week, Russia looks to be gaining the service very soon. According to a forwarded invite obtained by TechCrunch, Apple is holding a small iTunes event at the local GUM shopping center in Moscow’s Red Square tomorrow evening. Rumors of the launch have been ongoing for a few months, as App Store users in the country were beginning to see music searches appear at very low prices.

According to a November report by Russian language publication vedomosti.ru, citing industry sources, Apple will sell songs cheaper in Russia for 11- to 20 rubles each, which translates to roughly 35- to 65 cents USD. Additionally, another report from Vedomosti claimed iTunes senior executive Eddy Cue and iTunes Europe Director Ben King went to Russia for the launch originally scheduled for Nov. 20. However, in November, the newspaper also cited sources close to Apple as saying the launch is now scheduled for the first week of December—possibly to coincide with the launch of iPhone 5 in the country. Today’s event invite seems to confirm at least the iTunes bit. We are working to gain more information. [TechCrunch]