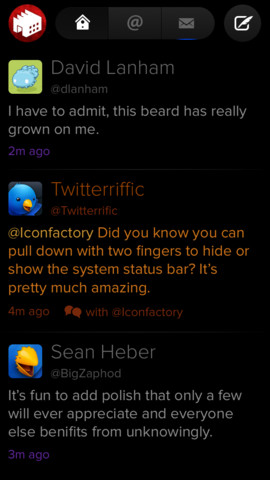 DISH Remote Access for iPhone version 3.0.2: DISH network users get access to a redesigned UI that now provides access to the guide, DVR, and search while streaming content in the background. The update also includes customizable “favorite channels” in the guide, support for the iPhone 5 display, and improved performance:

-Improved the performance, stability, and reliability of the application
-Completely redesigned user interface
-You can now use your Guide/ DVR/ Search while streaming in the background
-Added ability to set and use favorite channels in guide
-Updated in app remote/ keypad functionality
-Took full advantage of the iPhone4s/5 high retina display to show high resolution images
-Added support for the larger iPhone5 screen

Plex version 3.0.1: A ton of changes and fixes following feedback to version 3.0 of the Plex iPhone and iPad app:

This annoying bug has been in Camera+ for waaay too long, but we weren’t able to reproduce it ourselves so it remained as elusive as the Loch Ness Monster, Bigfoot, and John McAfee. But thanks to the most magical 1-star review, Camera+ user MikeDVB finally detailed the exact steps to reproduce it. As soon as our Bug Extermination Department got the word, POOF… it was gone like Keyser Söse.

Grand Theft Auto Vice City: Just released on the New Zealand and Russian App Stores, the iOS edition of Rockstar’s Grand Theft Auto: Vice City should be making its way to the US store shortly.

8 great Mac Bundles | We have a list of 8 of the best Mac software bundles currently available. Check it out here.