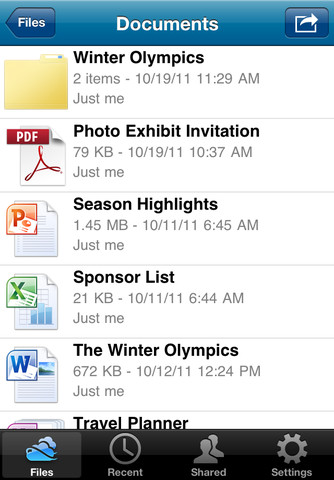 Update: A Microsoft spokesperson confirmed the situation to The Verge:

Microsoft has confirmed its latest SkyDrive iOS update is being delayed by Apple. A spokesperson says: “Similar to the experiences of some other companies, we are experiencing a delay in approval of our updated SkyDrive for iOS. We are in contact with Apple regarding the matter and hope to come to a resolution.”

According to a report from The Next Web that cited sources close to Microsoft, Apple is currently preventing Microsoft from updating its SkyDrive iOS app due to a disagreement over whether Apple should collect its usual 30 percent cut of additional storage purchased through the service. TNW explained:

The difficulty began when Microsoft rolled out the ability for SkyDrive users to purchase more storage space on the service. From that point, the company was not permitted to update its application in the iOS App Store.

The reason? It doesn’t pay Apple a 30% cut of subscription revenue generated by the application through the paid, additional storage. Microsoft, TNW has learned, has a new version of the application ready to go, including a key bug fix that would rectify a crashing bug, but cannot get it through.

In other words, Apple is apparently not allowing apps that offer or work with a subscription service outside of in-app purchases or the App Store. While we imagine that many smaller developers have been able to get around this stipulation, Apple’s App Store review guidelines clearly states, “Apps utilizing a system other than the In App Purchase API (IAP) to purchase content, functionality, or services in an app will be rejected.” It also stipulates, “Apps that unlock or enable additional features or functionality with mechanisms other than the App Store will be rejected.”

According to the TNW, Microsoft attempted to compromise by offering to remove all subscription services from the app. Apple apparently refused:

Microsoft has persisted in trying to work out a compromise with Apple, but has thus far failed to come to an agreement. The company offered to remove all subscription options from its application, leaving it a non-revenue generating experience on iOS. The offer was rebuffed.

The report noted third-party developers that integrate SkyDrive using the official SDK are now experiencing delays in getting their app and updates approved for the App Store:

The second side to this is that Apple appears to be freezing out developers who build third-party applications that interact with SkyDrive, as the Microsoft service isn’t paying a cut of its fees to Apple. Developer complaints are cropping up. For example, the following