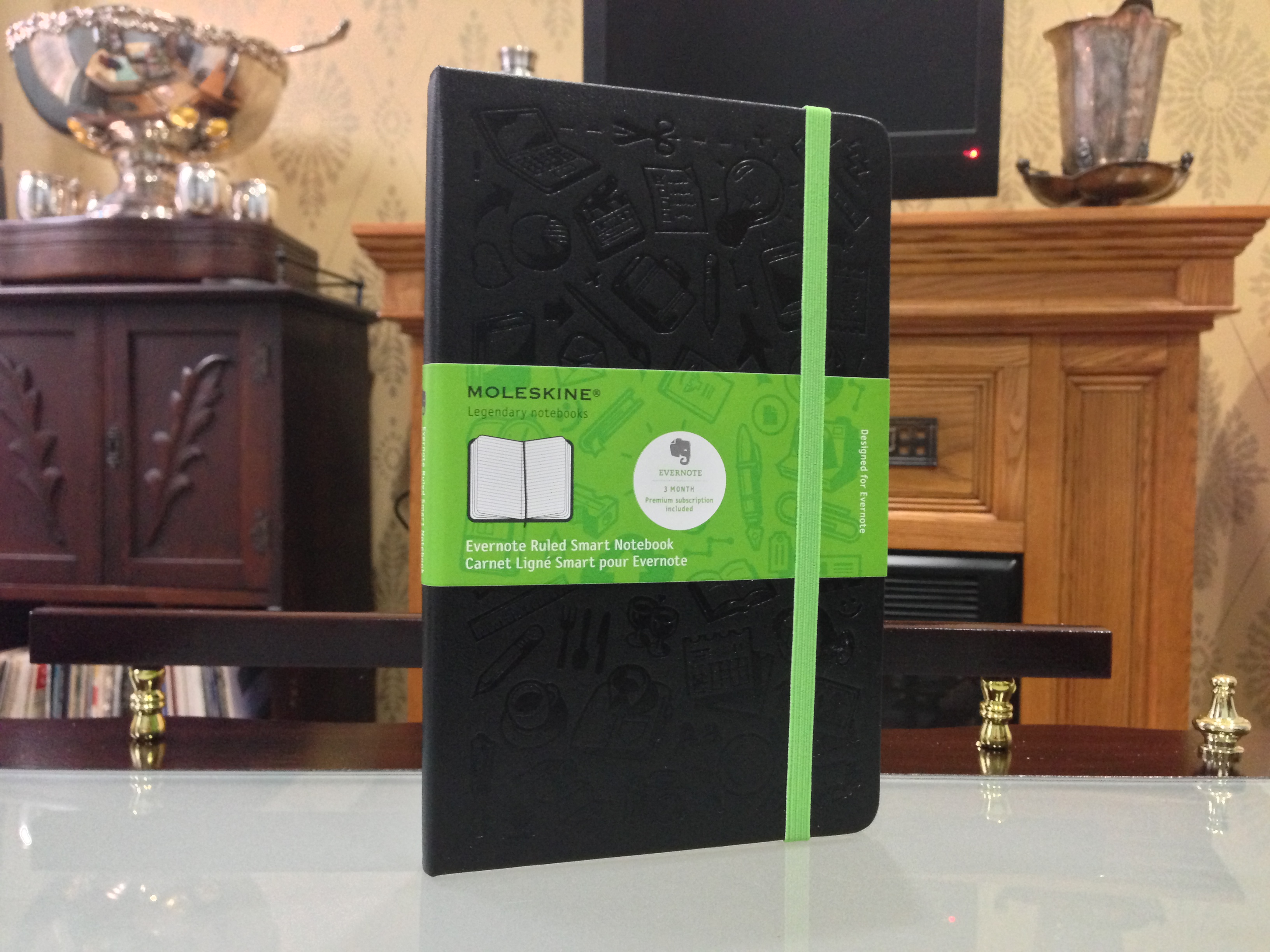 UPDATE: The giveaway is now closed.

Moleskin, a widely renowned high-end notebook manufacturer based out of Milan, teamed up with popular note-taking app Evernote to launch a series of smart app-enabled notebooks just before the new school year commenced.

I bought one of these notebooks right away for grad school, intended to use it religiously, and hoped it would transform the way I study. Of course, one week into the semester, I found myself using the Evernote app on my iPad more often than the smart notebook itself. However, I still found the notebook quite beautiful, well done, and interesting in concept. For that reason alone, I figured I’d write up a little review now that the semester is over and even giveaway two of the $29.95 large-ruled smart notebooks.

A gallery is below. 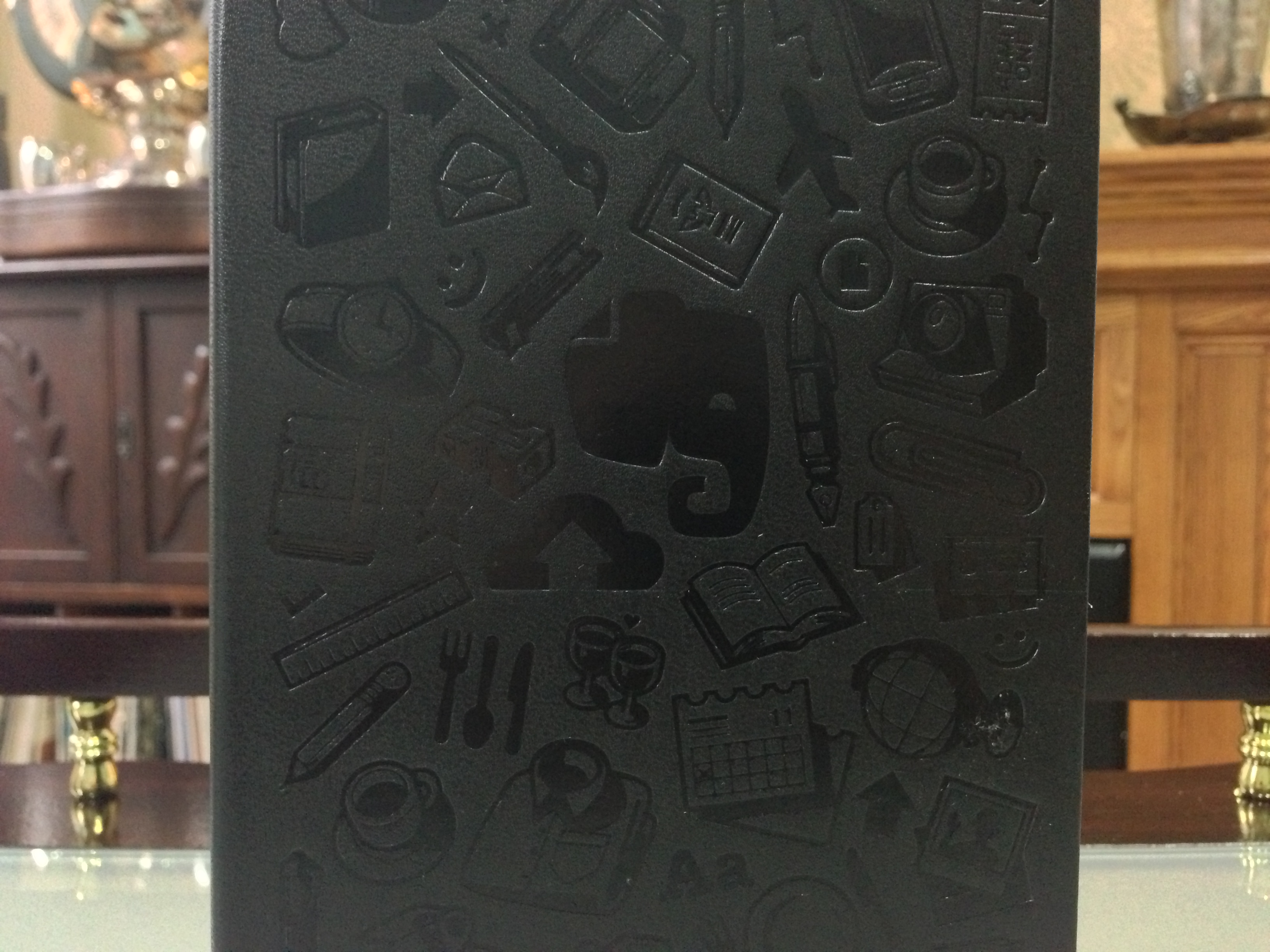 First thing’s first: This is one high-quality smart notebook. It feels thick, but not too heavy, soft to the touch, and the textured icons embossed on the front give a very modern yet classy appearance. I saw many hipsters toting these around at school this fall/winter (but don’t let that deter you). There are 240 pages of acid-free, lined paper inside, and, well, what more can I say other than the pages look beigey white, feel smooth, and don’t seem like thin, cheap notepaper. Overall, I can definitely tell that Moleskine’s design-savvy minds out of Italy didn’t skimp when creating a notebook for tech geeks. It’s the perfect combination of durability and aesthetic. Nothing more, nothing less. 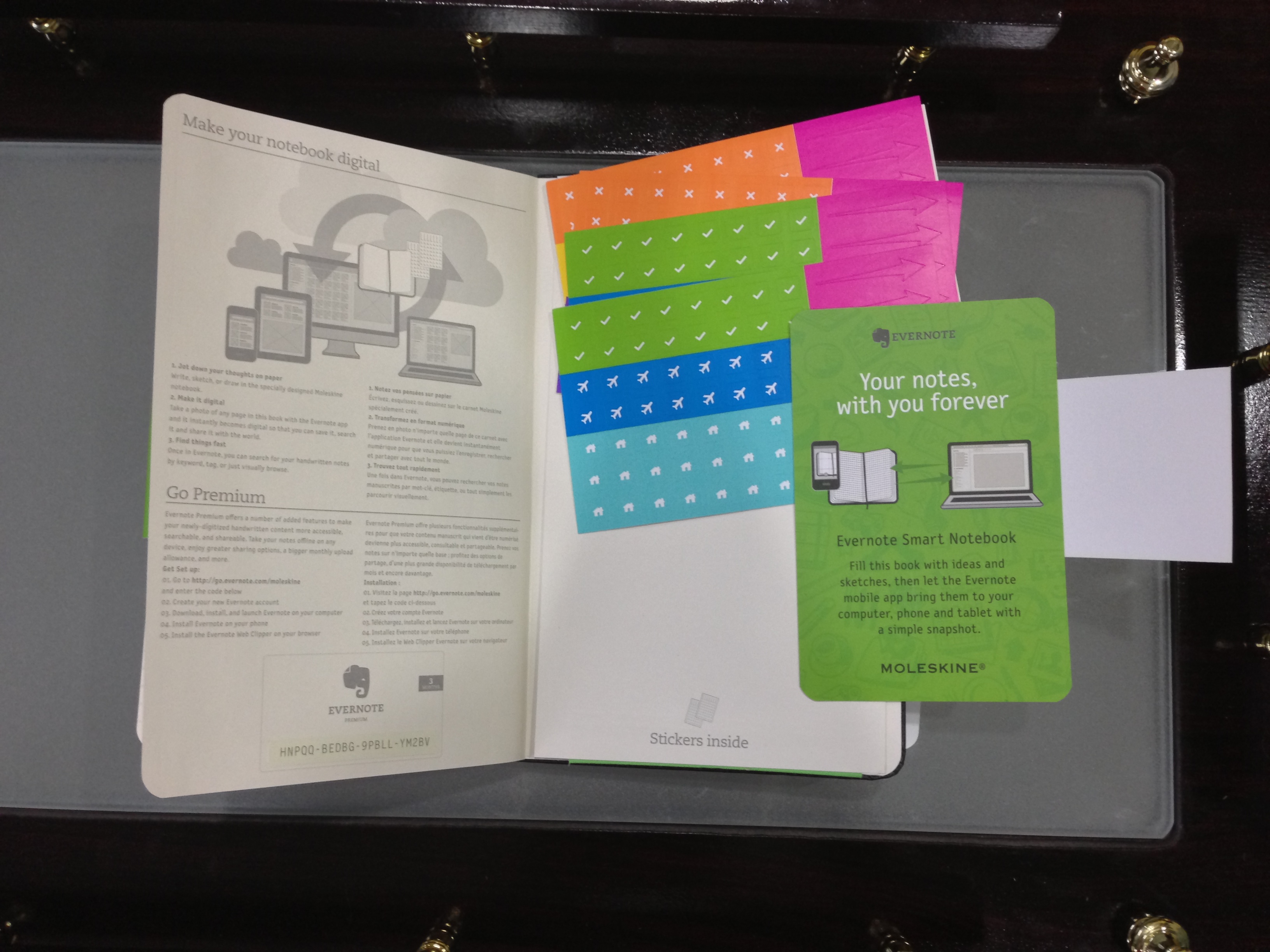 The smart notebooks come with a complimentary bonus three-month premium subscription to Evernote— a $15 value. So, right away, that means the large ruled notebook really costs $15 a pop. Evernote Premium benefits include access to notes offline, PIN lock security on accounts, 1GB supersize upload support, the ability to search PDFs, view past versions of notes, and sharing options.

The notebooks also come with four sheets of smart stickers for tagging. Users can capture a page with their iPhone, iPad, or iPod touch camera (via the Page Camera function on Evernote), and the Evernote app will automatically recognize the sticker and tag and organize to the corresponding note. This feature is iOS only, though. Check out Evernote’s Getting Started page for more details on how to customize smart stickers. 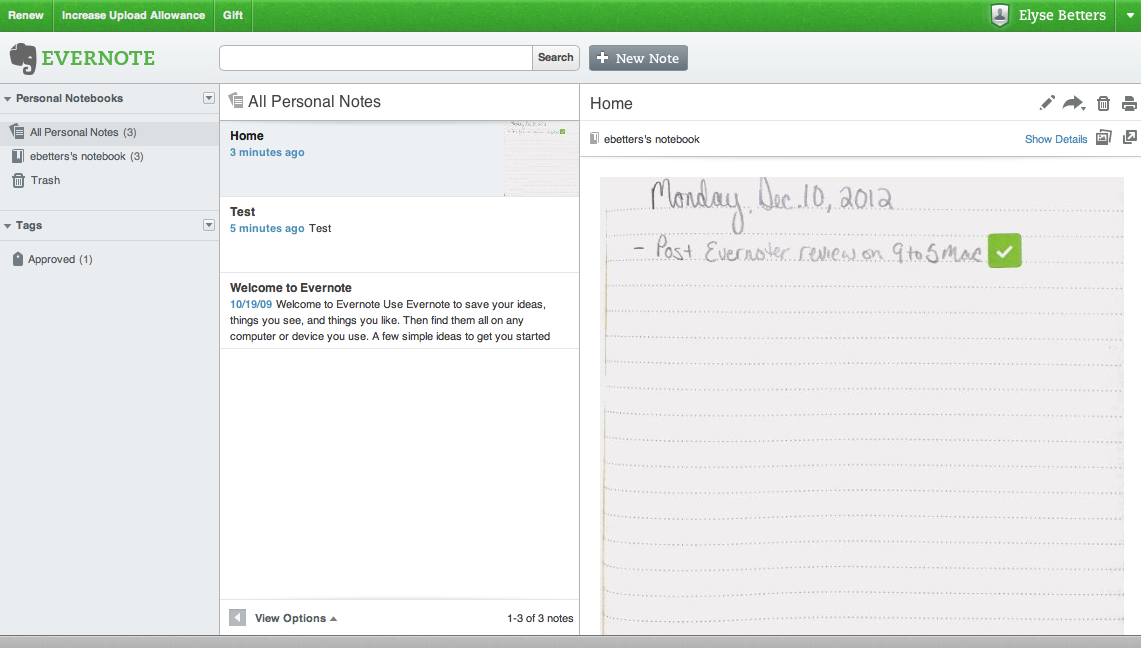 So, in theory, users would take notes with their smart notebook, add tagging stickers, take pictures of the pages, and Evernote organizes and back ’em up. And, in real-world testing, the smart notebook and Evernote app did just that.

I was overzealous at the start of school and wrote everything down, tagged work notes, school notes, meetings, captured everything, uploaded to Evernote, searched for keywords on the app to bring up specific notes, etc. But, as the semester became more hectic, and my iPad came out more often during class, I found myself forgetting the smart notebook most days at home. By the end of the semester, my Evernote app held all of my typed notes and my smart notebook sat three-fourths empty and buried on my desk.

This is just my experience, though. Those of you who love to take physical notes and carry notebooks around daily will love the iOS integration. I certainly did when I used it.

Oh, and notes synced up beautifully to Evernote across all iOS devices including the Mac and web app. I never experienced a note disappearing on any of the versions, and I loved the extra Evernote features, such as locations tags, voice notes, clips, files, etc., that enhanced the entire note-taking process.

Should You Buy It?

Yes. But only if you like to take physical notes and plan to use Evernote regularly. Otherwise, it will sit on your desk and collect dust. The smart notebook is beautiful, the Evernote service is great, but folks don’t really need a smart notebook for day-to-day living. It’s useful for some, though, not too pricey, and the ability to back up notes is always a plus. Check out Moleskine’s full range of smart Evernote notebooks here. If I drew more often, I think the graphing paper one would be especially handy for digitizing doodles and artwork while on the go.