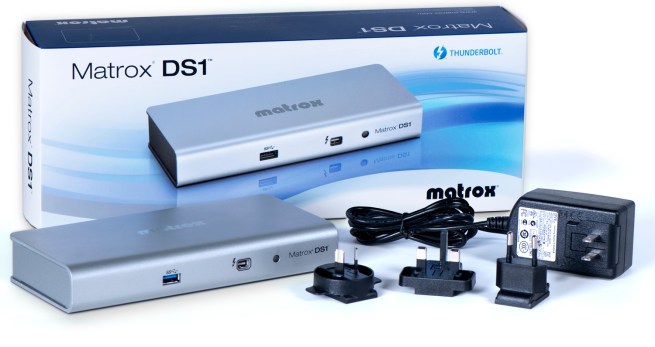 Not only did the shipping date get pushed back a few months, but also the design changed somewhat. Originally, there were three USB ports on the back. Now, the USB3 port is moved around to the front. The DS-1 also comes in two varieties: DVI and HDMI ports. For testing, I got a DVI model, which unfortunately only does single-link DVI, not dual DVI, the kind that powers a 2,560-by-1,600 30-inch display.

Was it worth the wait?

With just over 24 hours of use, the Matrox DS-1 works “as it should.” I’m able to fill up the USB ports with hard drives, charge iPad Minis, and of course hook up a USB keyboard/mouse combo and go about my business. Note: I did have a single issue where my keyboard stopped working, but re-plugging it seems to have worked and it has worked fine since.

The DS1 also has audio out and audio in via standard AUX jacks. These work well with some desktop speakers (in my case Audyssey LESs). Ethernet hooked up well to my Time Machine at 1Gb speeds, as you’d expect. Even with my 802.11N wireless network, a Gig Ethernet’s connection is so much better with the reduced latency, reduced packet loss, and low overhead. Everything is quicker. Without a dock, however, I’d rarely go through the trouble of plugging in.

Finally, the DVI out port worked great for me. I was able to hook up to 1080p displays (in my case an AOC 27-inch 1080p) without an issue, but I wasn’t able to get full resolution on my HP 2,560-by-1,600 30-inch display, because the DS-1 only does single-link DVI. That’s a bummer, but it does work well for 1080p and below. The HDMI version of the DS1 also transmits audio through the HDMI connection.

A two Amp, 12V AC adapter—which means you probably won’t be able to quickly charge a bunch of Retina iPads, but overall it seems to be able to handle whatever USB devices I throw at it—powers the DS1. The box itself is made of MacBook-matching brushed aluminum and is very light. To be honest, I’m more likely to hide this thing away, no matter how good it looks. But, for those who like to show off their docking stations, by all means… (although, putting the Thunderbolt port on the front is a questionable design decision).

It would have been nice to have Firewire ports on this thing, more USB 3 around the back, and even a Thunderbolt Passthru for the significant $249. But, as they say, it is sure a lot less expensive than the only other option—the Thunderbolt Display. If you can wait until “Q1 2013”, Belkin is readying a more feature-rich Thunderbolt Dock with Thunderbolt passthru, three USB3 ports, and Firewire (that also seems to be undergoing some changes).

You can grab the Matrox DS1 now at B&H Photo/Video in DVI model or HDMI models with free shipping outside of New York. Don’t forget the Thunderbolt Cable, not included.

By the way, if you are drooling over the monitor above, it is the very affordable $270 I2757FH AOC 27-inch display. A review is coming on that very soon, but spoiler alert: it’s fantastic for the price.

Montreal, Canada — Dec. 13, 2012 — Matrox today announced worldwide availability of the Matrox® DS1™ series ofThunderbolt docking stations that brings all the productivity benefits of a desktop computer to MacBook® Pro and MacBook Air users. From a single Thunderbolt™ connection, users can add multiple peripherals including either a large DVI or an HDMI® display, a full-size keyboard, and a mouse. A gigabit Ethernet port provides connectivity to a wired corporate network, enabling data transfers 18 times faster than Wi-Fi™. One SuperSpeed USB 3.0 port, conveniently located on the front of the unit, plus two USB 2.0 ports, a microphone input, and a speaker/headphone output are also provided. With its solid aluminum construction and space-saving design, Matrox DS1 is ideal for use in student residences, corporate environments, and home offices. Two versions are offered, one for use with DVI monitors and another for use with HDMI displays.

“MacBook Pro and MacBook Air users can now come and go without disconnecting and re-connecting all their peripherals, tame the cables cluttering their desks, and save wear-and-tear on their computers,” said Charles Amyot, product manager at Matrox. “One Thunderbolt connection to Matrox DS1 does it all!”

Priced at $249 US not including local taxes and delivery, Matrox DS1/DVI and Matrox DS1/HDMI are now available in the Americas through a network of authorized dealers. Worldwide availability is scheduled for early January 2013.

Matrox is a world leader in graphics, imaging, and video technology providing an extensive array of real-world relevant OEM and end-user solutions to businesses and individuals across a diverse range of professional markets, including media and entertainment, finance, digital signage, medical imaging, manufacturing, factory automation, security, government, and enterprise computing.

Headquartered in Montreal, Canada, the privately owned company operates on a global scale with representation and offices in the Americas, Europe and Asia. For more information visit www.matrox.com. 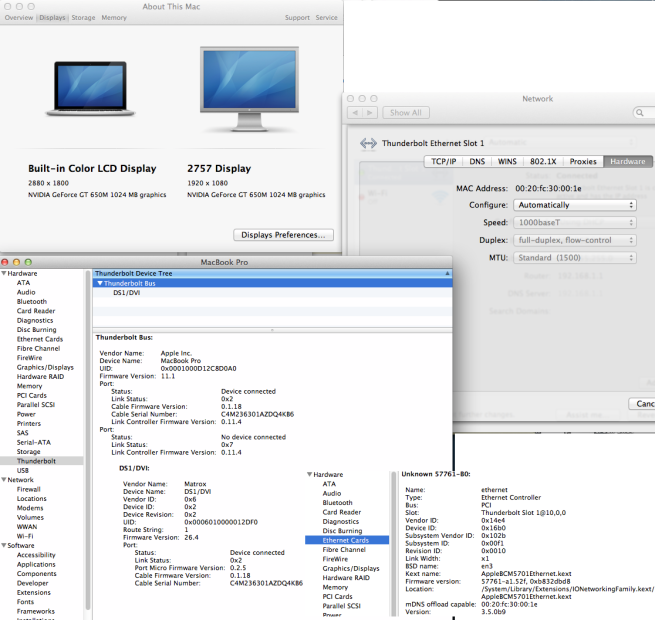