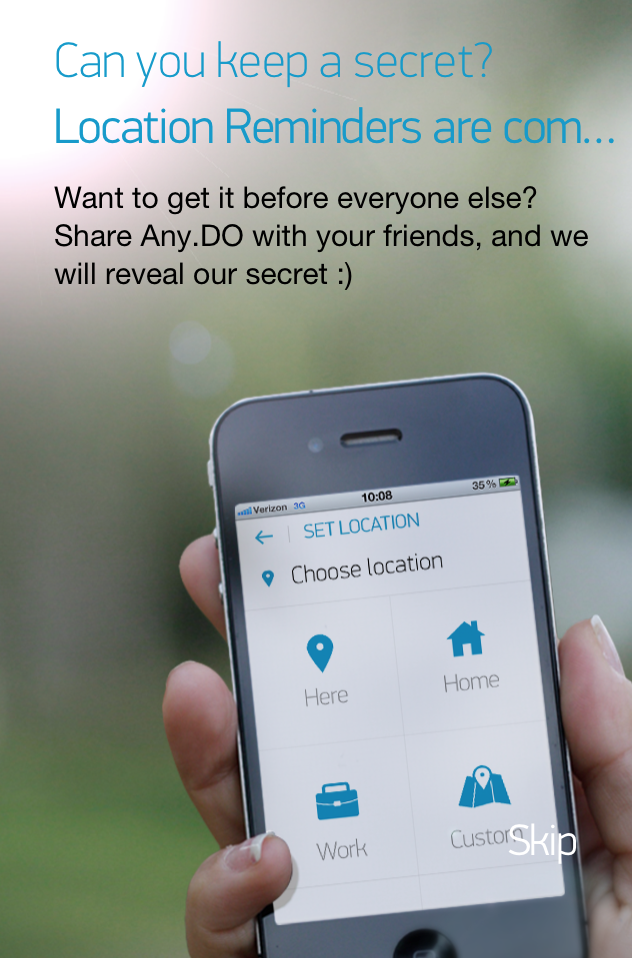 ✪ Location based reminders – ‘Remind me to pick up groceries when I leave work’ ★ Adding a task is easier than ever ✪ New Daily sorting (Today, Tomorrow, Upcoming & Someday) ★ Email your to-do’s to do@any.do and see them in your Any.DO app ✪ Performance upgrade ★ Stability improvements

* How many waves you can defeat in the new NORTH POLE CHRISTMAS ARENA? * Prepare for encounter with ZANTA, a new Christmas Boss! * Try out the new GRENADE LAUNCHER…you’ll love it! * Equip yourself well and shoot your way through the NEW STORY MISSIONS! * New special PRICE OFFERS on weapons! * Solve the underground puzzle and WIN a Dead Trigger T-SHIRT! ☣ Tweaks: * Mini-Mortar has been improved to be more deadly

Cox TV connect for iPhone and iPod touch: Cox TV’s app for providing access to live TV on your iPad at home gets updated today with support for iPhone and iPod touch. The Cox TV Connect app for iPad also gets updated today with new features including access to TV listings when off your home network, close captioning, and the ability to ” Schedule DVR recordings from anywhere with remote DVR scheduling.”

Letterpress version 1.2: Atebits, the brains behind Letterpress, just announced version 1.2 of its popular word app. According to the developer, a new feature, dubbed “Share Replays”, is here. Check out a demo of the upcoming feature at Letterpress’ website.

• Themes on iPad We know our loyal iPad users felt left out when we released the app without support for themes, but we’ve fixed that and you can now use the themes you know and love from the iPhone/iPod touch on your iPad! • Text Size Selector Having trouble reading? We added the option to increase the size of the text to make your life a little bit easier :) • Many, many more smaller tweaks and usability improvements.

★ Decide where to go, or what to do when you’re already there. ✓ If you’re looking for a place to go, you’ll now see the most important stuff up top when you tap through, like the rating, address, hours, menu, and phone number. ✓ If you’re already checked in, you’ll see things like who else is there and popular tips (to make sure you order right). ✓ We also added big, swipeable photos at the top to help you get a sense of what it’s like. ★ Every time you check in, you’ll learn something interesting. People love points, great tips, and other nuggets of information. So we’ve simplified the experience after you check in to just show you one important takeaway. ‘Seven weeks in a row going to the gym,’ ‘a great off-the-menu burger you have to order,’ or ‘your 20th time hanging out with your friend Charles.’ Foursquare will show you the most interesting highlight from your visit.

GuitarToolkit version 2.2: iPhone 5 optimizations, upside-down orientation, VoiceOver support, and more in the latest update to the one of the best guitar toolkit apps on the App Store:

-Improved stability on the iPod Touch 4th Generation -Fixed an issue where a player’s helicopter spins when flying -You can now change what song is playing from your custom playlist by shaking your device -Fixed issue where some players experienced their device’s keyboard appearing during gameplay -Assorted Bug Fixes ***Please Note: “Tap to Shoot” was enabled by default in the latest update. To restore the shoot button, navigate to the Control menu via the Options menu and disable “Tap to Shoot”***

Rhapsody for iPad: The Rhapsody iPad app is finally available in the App Store today following the launches of iPad editions for Spotify and Rdio:

Developer tap tap tap added a new Quality setting for version 1.2, called “High”. The setting formerly named “Full” is now called “Normal”. The update also includes optimization to the recently added Front Flash feature. Camera+ is reportedly on sale for 99 cents, according to the app’s description, but it has been at this price point for at least a few weeks.

✓ This update contains improvements and bug fixes, and is recommended for all users.

-This update fixes a critical bug that affected small number of users during initial setup.

– Improved, real-time messaging on what’s happening when you’re syncing your NikeFuel, or when you can’t sync. – Various bug fixes to improve the experience.