1. Static | 99 cents
Static just landed on the App Store today and tracks how well users are doing in their favorite social channels (i.e., Twitter, Instagram, Analytics, Dribbble, and GitHub). The app’s description gives the following summary: “Just added an Instagram photo? Just published a blog post? How much traffic did you get as a result? How many new followers did you gain on Twitter? Instead of hopping back and forth between apps you can see your most important social stats from one screen.” Check out the promo video above for more details.

2. Scanner Mini | Free
Scanner Mini by Readdle launched today, and it basically converts an image into a scan, detects borders, removes shadows, corrects perspective, and spits out a PDF file in 5 seconds. To sum up its new scanning app, Readdle said: “We put the core functionality of Scanner Pro into Scanner Mini, and giving it away absolutely for free as a Christmas present to all iOS users!” 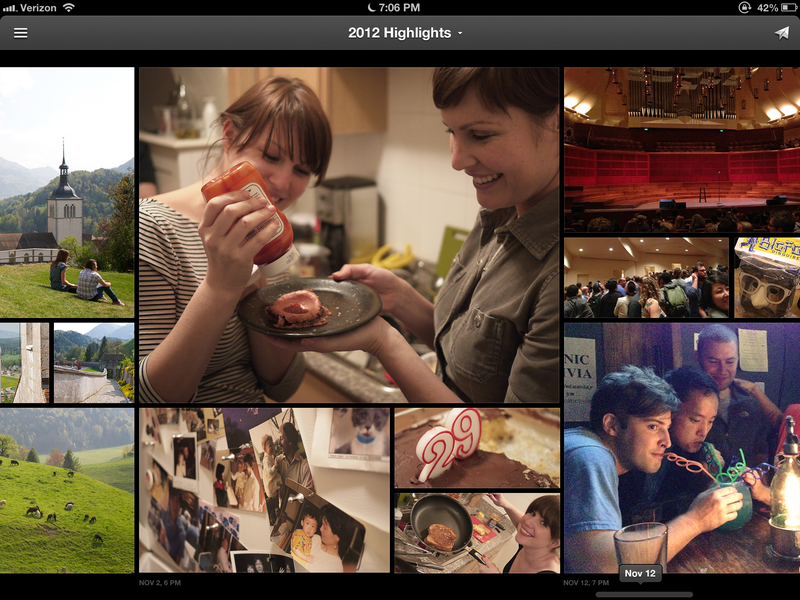 1. Everpix | Free
Everpix is essentially a smarter way to gather, browse, and showcase—or “highlight”— photos, according to the app’s cofounder, Kevin Quennesson, who worked at Apple as a “tech lead and senior software engineer” from 2007 to 2009. He developed the Everpix photo service in 2011, launched the iOS app earlier this year, and is now rolling out the full experience to Windows and making Everpix.com fully compatible with iOS and Android web browsers for mobile devices.

9to5Mac sat down recently with Quennesson and Wayne Fan, Everpix’s second cofounder and lead designer, to get a demo of the app’s refined “Highlights” algorithm, which now boasts semantic tagging and improved photo selection, and a briefing of location-based syncing of the camera roll and other features in version 1.4 of the iOS app.

Quennesson and Fan said they began Everpix to tackle one issue: “Photos are being snapped and shared at an exponential rate. The problem is… the more you have, the harder it is to organize them, or sort through that endless grid.”  So, to solve the issue, they developed Everpix’s image analysis technology that “understands” photos, selects the best of multiple, similar shots from a device, and weeds out any bad pics. The algorithm works “much like the human brain,” they said, and it even smart crops.

The app further allows in-app mailing between users, viewing of photos by “Moments,” “Highlights”, or an expanded view to see all the saved images in between, and the service, which is accessible via a mobile device and web browser, can sync photos from just about anywhere, automatically import, and it gathers everything together in the cloud.

Those who are interested in trying Everpix can sign up for a free 30-day trial at www.everpix.com, and then, if desired, they can subscribe for $5 a month or $40 a year.

4. Kobo Books | Free
Version 5.9 launched last night with the ability for users to rate and review books in their library. The full change log also includes:

5. Garmin U.S.A. | $39.99
Version 2.3 is now live, and it supports iCloud to help sync favorites, Foursquare to provide access to millions of venues worldwide with personalized suggestions and check-in capabilities, Glympse to allow sharing of real-time locations and time of arrival estimations, and Last Mile for pedestrian navigation when parking near a destination. The latest version also includes updated NAVTEQ maps.

6. Navigon USA | $39.99
Garmin pushed out the above updates to its Navigon USA app today, as well.

8. CoPilot GPS | Free
This is the free version of the above app, and it received all the same updates today too.

9. Viber | Free
Version 2.3.0 just landed, and it features the ability to share stickers with friends, send emoticons in text messages, and send locations as messages. It also includes an enhanced messaging experience and an option to connect with friends in group conversations. The app also now features optimization for iPhone 5 and iOS 6.

Collect Christmas gifts as you keep jumping up to the North Pole. Some will contain coins and some will contain other surprises. The bigger the box, the more coins inside! The higher you get to, the bigger the box! We’ve also added a store where you can exchange those coins that you collect for five all new outfits, each with its own special abilities. Additionally, you can get a magical resurrect tea pot that saves you should you fall, as well as a head-start rocket that will blast you up to 15,000 in a blink of an eye. Merry Christmas, Happy Holidays, Doodle Jump!

12. Fandango Movies | Free
Version 5.3  includes the following updates, according to the full changelog:

13. AutoCad WS | Free
Version 1.6 introduces new features that improve the drawing and editing experience when using AutoCAD WS from mobile devices, such as:

16. Food Network on TV | Free
Version 3.0 brings an all-new dedicated experience for iPad, bug fixes, and optimization for the iPhone.

17. Fedex Mobile | Free
Version 4.0 features a FedEx locator feature that allows users to easily find their closest location complete with “the FedEx services each supports, operating hours and driving directions.” Users also got support for iPhone 5 and the following tweaks: