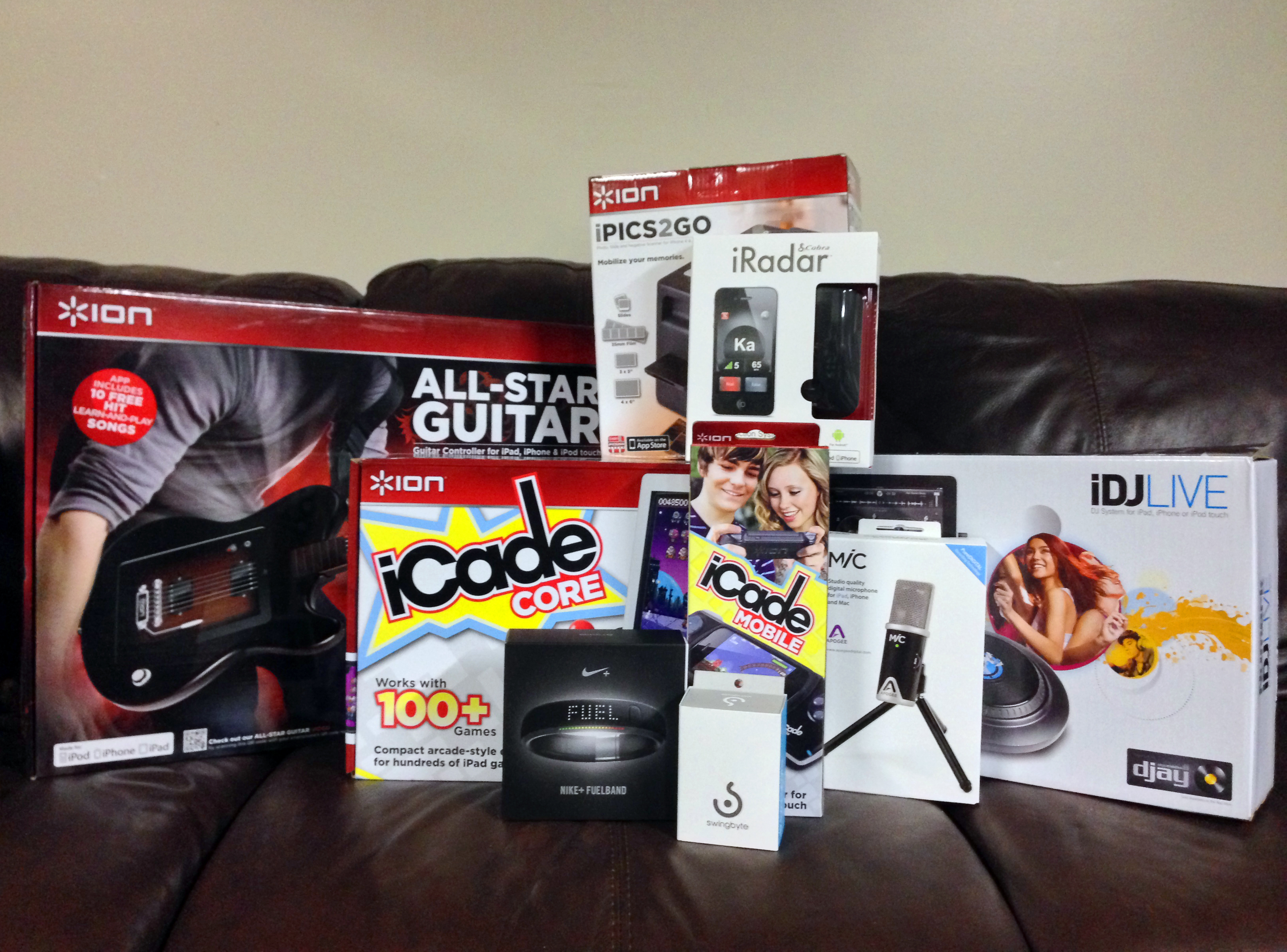 It’s Thursday and you have four days to get the perfect Christmas gift, but have no fear…9to5Mac is here. O.K., enough with the cheese, let’s talk app-enabled accessories. Oh, man, I need to stop.

But, seriously, app-enabled accessories are the perfect gifts: they come in a variety of price ranges and work with a variety of iOS apps. So, we looked at a few popular, unknown, pricey, and not-so pricey ones and rounded them up below. Hopefully, this guide will give you a few ideas and inspire you to go shopping A.S.A.P.

Note: If you buy through Amazon, and are an Amazon Prime member, you could get many of these products shipped overnight for just $3.99 each.

Scroll to the bottom for details on the giveaway.

Ion launched this nifty toy in the fall, and it is really, really cool. Think Guitar Hero…but for jammers and free-stylers. Like Ion’s popular iCade line, it charges with AA batteries. So, no wires and no fuss. It also fits any iOS device. A padded storage compartment adjusts to fit the iPad, iPhone, or iPod Touch, and there is room to plug in a Lightening adapter (not included).

The built-in speakers pump out great volume, but there is also a headphone output for silent practice, and it has electric, acoustic, and bass guitar effects. The guitar, which is useable by both left-handed and right-handed folks, works best with the All-Star Guitar app that comes with 10 free songs pre-loaded, with access to additional songs for download, but it also works well with Garage Band and WI Guitar.

It’s packed with features, feels sturdy, and is definitely a cool gift for the musically inclined. Oh, and it seems like a neat way to learn guitar.

More accessories are below.

Ion first made headlines with its iCade Cabinet and iCade Jr., but it added two more products to the iCade line earlier this year with the iCade Core and iCade Mobile. I would not recommend the iCade Mobile right now, because the current model only fits the iPhone 4 and 4S, but the iCade Core fits all iPads. However, the Mobile is a quality device and perfect for hand-held controller gaming.

The iCade Core is wireless and uses two AA batteries for a charge. I played with the device for a few days and had no battery issues. The Core also connects wirelessly to the iPad using Bluetooth; the iPad just rests in the Core’s pass-thru slot. My third-generation iPad even fit well with a case on—excellent. No cables, no mess, and no Lightening adapter headaches.

While the Core doesn’t necessarily come with an app, it does work with “500+ games” on the App Store. I tested it quite vigorously with Asteroids via the free Atari Greatest Hits app, and it worked beautifully and amazingly. I definitely loved the ole’ school arcade feel of this thing, and everyone wanted to take turns playing as soon as they saw it in action.

Cobra has made Radar Detection systems for vehicles for over 30 years, but now it has an iOS-compatible version with sharing, social-like capabilities. The device acts like a normal radar detector—looking out for cops, traffic stops, etc.—but it also uploads traffic data to the Cloud via the Cobra iRadar app for other users to download and access. The sharing circle allows anyone in the iRadar community to know where “trouble spots” are on the road.

I brought this on vacation with me, and it definitely worked as advertised. Unfortunately, the sharing features weren’t too useful in upstate New York, because no one in the area had one of these devices. Still, the idea is pretty cool—especially for those with a lead foot.

Nike+ FuelBand, an innovative wrist-based device that tracks and measures users’ activity, launched in February 2012 with an iOS-companion app, and the sportswear company just unveiled new “White Ice” and “Black Ice” colors last fall. I tested out the basic Black version and fell absolutely in love with it.

As a person who sits in front of the computer most days for work, I enjoyed the ability to set activity goals and track my progress. I never realized how lazy I am until I started wearing this thing everywhere. Syncing with the Nike+ FuelBand app allows users to view their activity history, stay motivated, and connect with friends via their favorite social channels.

Jawbone has a similar product, dubbed “Up“, but it had to revamp and re-launch this winter after a series of setbacks and product flaws. So, if I were you, I would go with Nike. It got the FuelBand right the first time around, and Apple CEO Tim Cook serves on Nike’s Board of Directors. So, that should seal the deal for most of you.

I am no sound engineer, but this is one cool product. iDJ Live is the simplest way to become a full-fledged DJ with an iOS device. Numark partnered with Algoriddim, the brains behind the popular djay app, to bring iDJ Live to djay for iPad. The turntables also work with Algoriddim’s video-mixing app, vjay, for video- and music-mixing capabilities.

The system lets users mix and scratch their music, with access to the iTunes music library, using two performance platters and a central mixer section that features a crossfader, buttons, and knobs. I loaded iTunes tracks to Deck A and Deck B, and then started to control, cue, transition, and even scratch within seconds. Numark said iDJ Live also works with any other core MIDI-enabled apps. Also, the Lightening adapter is required for the fourth-generation iPad, iPad mini, and iPhone 5.

Numark’s DJ Live comes with an iPad stand and a headphone/speaker audio cable. Like Ion’s All-Star Guitar above, iDJ Live is bursting with features, feels of high quality, and is perfect for the musically inclined.

Apogee’s MiC is the self-touted “first studio-quality microphone for Garage Band on iPad, iPhone, and Mac.” And, boy, it certainly is. Like I said above, I am no sound engineer, but the sheer quality of the MiC is, well, extremely studio-like. It features a status LED, control check toggle, microphone preamp with up to 40dB of gain, cardioid condenser microphone capsule, and analog-to-digital converter. These specs allow it to record music like a pro and capture crisp audio for video.

Aside from working well with GarageBand, Apogee has a long list of compatible Mac software. The MiC also pairs with a slew of accessories such as the Zacuto Zgrip. I tested the microphone during a Hangout, and everyone in the video chat kept complimenting me on the sound of my audio. I —and they—was amazed. This would be an excellent investment for vloggers and musicians—hands down. For those who want to hear the MiC in action, check out the bevy of sound samples at Apogee’s website.

The Logitech Broadcaster and iOS app are revolutionary for mobile vloggers, as the setup is ideal for folks who want to broadcast at events or conferences. It is even great for YouTube publishers who want to do more than sit in front of a stationary webcam in their living room. With that said, Mac mini users—or anyone without a built-in Facetime HD camera—would also love the Broadcaster and its Mac app counterpart. Check out 9to5Mac’s full review for more details.

The iPhone Swivl is a personal camera crew-like rig that rotates 360 degrees, tracks movement via a three-in-one sensor as the iPhone shoots video, and it comes with a remote that allows users to control their recording and tilt the rig up and down. The box also includes a tripod accessory, batteries, lanyard, and a USB cable. It is compatible with the iPhone 5 and older generations, but a 30-pin Lightening adapter is required to use it with an iPhone 5. Users also need to download Swivl’s free app to start and stop recordings with the remote, but it is able to record video, track movement, and tilt without the app.  Check out 9to5Mac’s full review for more details.

This smart notebook comes with a complimentary bonus three-month premium subscription to Evernote— a $15 value. So, right away, that means the large ruled notebook really costs $15 a pop. It also packs four sheets of smart stickers for tagging. Users can capture a page with their iPhone, iPad, or iPod touch camera (via the Page Camera function on Evernote), and the iOS Evernote app will automatically recognize the sticker and tag and organize to the corresponding note. This feature is iOS only, though. Check out 9to5Mac’s full review for more details.

I haven’t had a chance to play with this thing, because I am not a golfer and do not live near a course, but it looks cool for those who want to hone their swing. The Swingbyte device basically attaches to a user’s club and then it syncs with the Swingbyte app to track swing history and analyze swing data. Swingbyte wirelessly transmits the data and “interactive 3-D imagery” via Bluetooth to an iOS device. Check out Swingbyte’s website for more details. If you want one of these for free, leave a comment below. We will contact the winner in 9to5Forums. (Warning: It won’t deliver until after the New Year.)