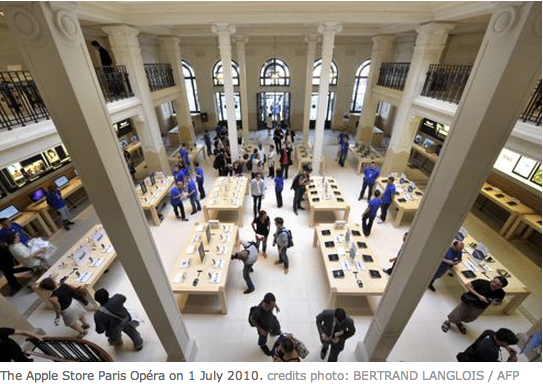 DailyMail reported today that Apple’s flagship retail store in France was the victim of an organized robbery. The crime apparently took place last night around 9 p.m. local time, three hours after the store closed for the day, with the suspects taking off with a reported £1 million in products. The masked, handgun-toting thieves were able to make off with the products before police arrived and have yet to be located. One security guard was “lightly injured” in the process:

Christophe Crepin, an Unsa police union official, told Le Parisien newspaper that ‘the four hooded and heavily armed criminals made their move very quickly. Most of the police forces were being mobilised to monitor the Champs Elysees, so the robbers have clearly benefitted from this opportunity to strike.’

Mr Crepin said the robbers mainly took ‘a lot of goods’ and very little money. Early estimates were that the haul was worth well over 1 million euros, or close to 1 million pounds.

Le Figaro noted that the €1 Million figure has not been verified.