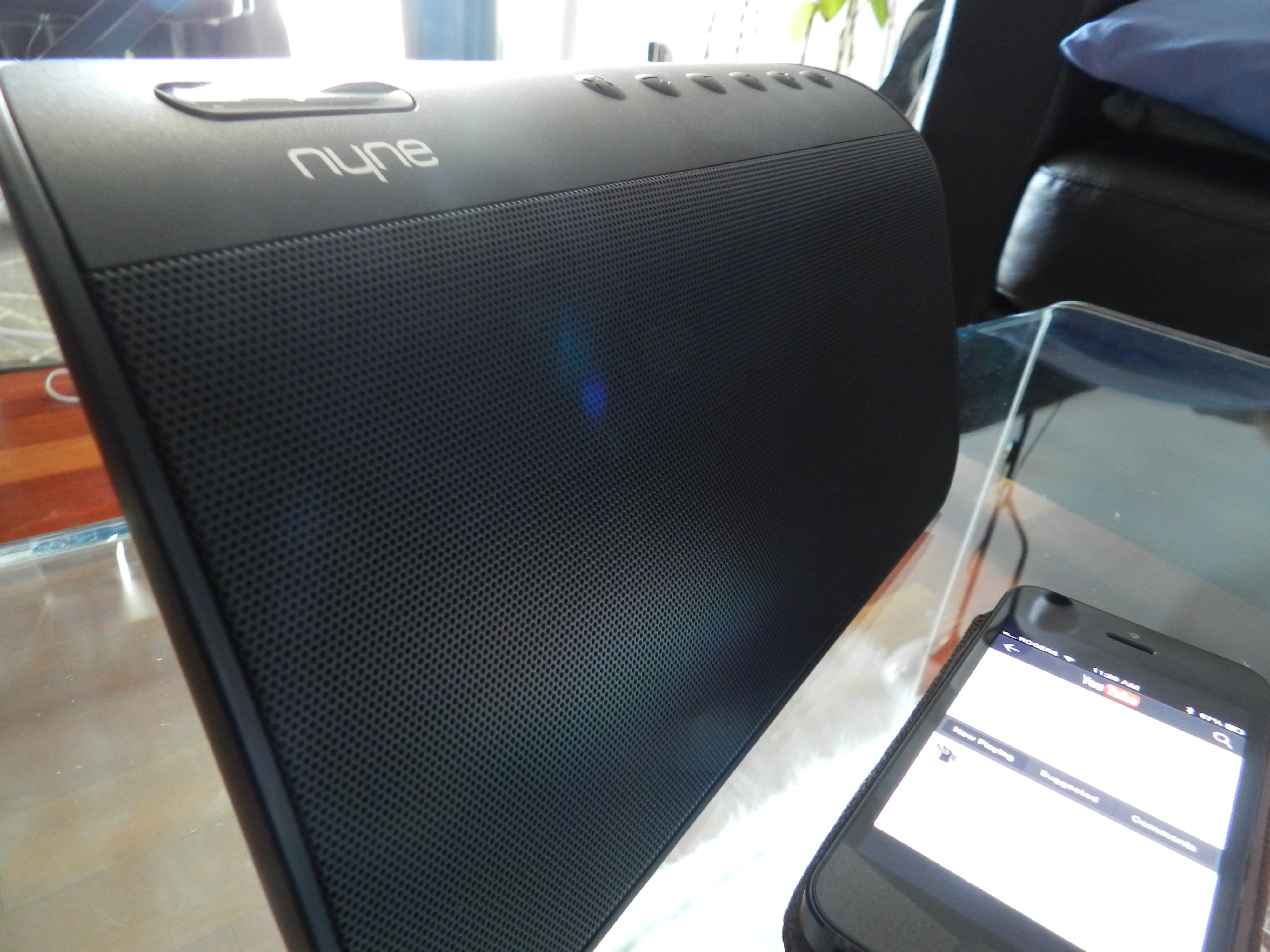 California-based audio accessory maker NYNE is getting ready to show off its latest line of bluetooth speakers, docks, and home audio products at CES next week, but for the past month I’ve already had the chance to play with one of its latest creations- the NB-250 water-resistant Bluetooth speaker.

There is a ton of competition among Bluetooth speaker manufacturers, but a couple have been able to make their way to the top of the majority of recommendation lists, including our own. NYNE’s main competition in my eyes is Logitech and Jawbone, two well-known accessory makers with high-quality, sub $150 bluetooth speaker products on the market. After having hands on time with both the $140 Jambox from Jawbone and the $99 UE Boombox from Logitech, NYNE’s NB-250 does have a few things going for it. First is design… 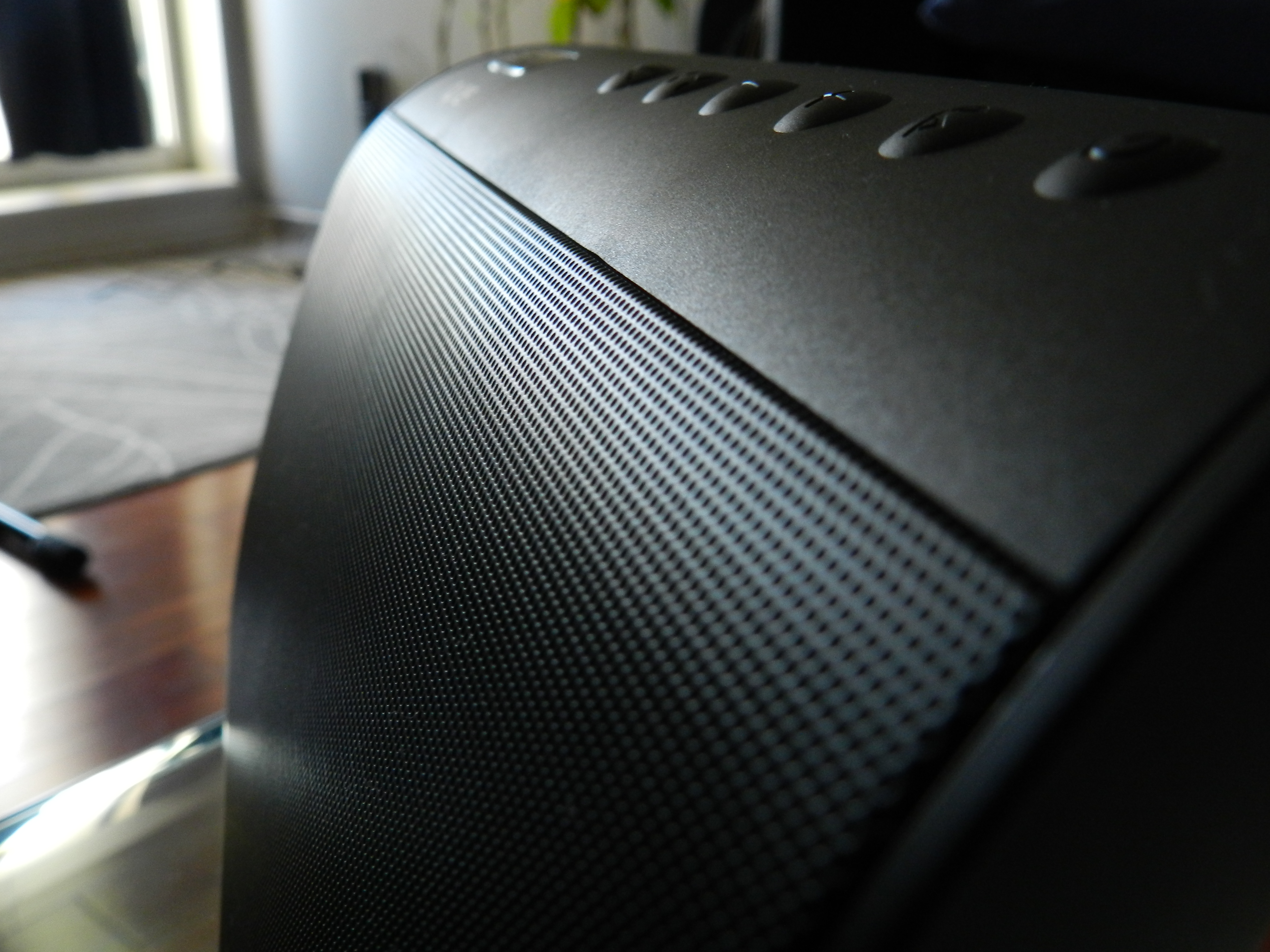 Lighter and smaller than Logitech’s $150 wireless speaker (as well as its new pricier $250 UE Boombox), the NB-250 comes in at just 2.1 x 10.2 x 5.8 inches and 2.2 pounds. Size matters with portable bluetooth speakers, and with the NB-250, you get the best of both worlds- undeniably better sound quality than the smaller Boombox and Jambox offerings, while maintaining a compact and portable design.  The NB-250 is wrapped in a soft, rubberized, black matte finish that NYNE said “repels water splashes and the occasional spilled drink.” It’s lighter than you’d expect, but nothing about it feels cheap. That rubberized coating also covers the buttons, making the speaker itself the only area not covered with the finish. From a purely aesthetic standpoint, the NB-250 holds its own against the more retro boombox style speakers, and alongside my black on slate iPhone 5, I personally prefer the streamlined, jet black Batmobile feel to Logitech’s 80’s looking traditional boombox designs.

Lately my first recommendation for a bluetooth speaker would be UE’s recently released $99 Mobile Boombox. However, for those looking to spend a little bit more, the NB-250 does provide a noticeable step up in sound quality without sacrificing a compact form factor. The UE Mobile Boombox is a small 3.4 x 3 x 7.8 inches, which tends to make the audio sound a little thin and shallow compared to the NB-250. That was certainly not an issue for NYNE’s speaker, which provided surprisingly full and accurate lows, despite being much smaller than most other $200 offerings on the market, and that’s the NB-250’s real shining point. NB-250 has no issues filling a room, even in a loud, party atmosphere, and the same can’t always be said for most cheaper speakers with a compact design.

NYNE says the NB-250 packs in a “pair of high quality drivers with ability to produce a detailed midrange and powerful bass” and 2 built-in passive-radiators for a low end boost. In my tests, what this all added up to was noticeably superior clarity and power from the NB-250 compared to the $99 UE Boombox. NB-250 also had no problems keeping up with Logitech’s last generation $150 speaker, but not surprisingly felt a little less powerful than the new $249 speaker. Keep in mind NB-250 is almost half the size of Logitech’s larger speakers, making it a real contender when portability is a factor.

A1500mA Rechargeable Lithium Ion Battery got me 10+ hours of playback, again beating out the average 6 hours or less from speakers at comparable price points. When closed, the stand that props up the NB-250 at the back also acts as a door to conceal an extra 5V USB port, 3.5mm aux-in, and wall adapter. The unit doesn’t stand upright by itself… you can see from the images of its profile below that it has a slanted, almost parallelogram-type shape. Luckily, the required stand/door feels sturdy, but NYNE also includes a carrying case and shoulder strap that leaves buttons & speakers accessible, pictured below. The NB-250 won’t speak to you or provide instructions via a display like some other units (features I personally didn’t miss), but pairing was as easy as you’d hope with pairing and power indicators present with small LEDs on the top.

The NB-250 is somewhere in between Logitech’s $99 and $249 offerings- in my opinion two of the best $250 and under bluetooth speakers on the market. At 2.2 pounds and almost half the length of the comparable speakers from Logitech, the NB-250 is a clear choice if the smaller $100 speakers just aren’t cutting it. You lose the handsfree calling that comes with the UE’s $99 Boombox, but you gain superior sound quality without having to step up to the larger form factor.

If you need a portable speaker that you will carry with you on a daily basis, NB-250 wins my recommendation over the over speakers mentioned above. That being said, if you’ve cleared a place on a shelf at home, the 6 pound, $250 UE Boombox from Logitech gets my vote by a narrow margin on sound quality alone.

NYNE’s NB-250 Bluetooth speaker is available to order from Amazon today for $199.