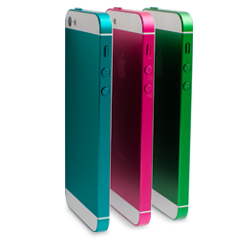 “Our checks indicate that the next iPhone will have more choices for customers,” the analyst wrote. “This entails an expansion in both the color patterns and screen sizes with the next iPhone (i.e., likely called the iPhone 5S) that we currently believe will be launched in May/June with certain supply production starting in March/April.”

Like Misek, who expects Apple to release the next-gen iPhone in six to eight colors, White is expecting Apple to release pink, yellow, blue, white and silver, and black and slate variants of the “iPhone 5S”. Misek also claimed last month that the new device could feature an improved camera, NFC, and better battery life.

White also believes Apple could launch the new model of the iPhone in multiple screen sizes for the first time:

“Our checks are also indicating that the next iPhone will offer customers more choice in terms of screen size,” White reported. “Although Apple offers a 4-inch screen on the iPhone 5 and a 3.5-inch screen on the iPhone 4S and iPhone 4, the Company has never offered multiple screen sizes for a single model. We believe this is about to change with the next iPhone offering different screen sizes that we believe will allow Apple to better bifurcate the market and expand its reach.”