Why it makes sense for Apple to acquire mapping solution Waze 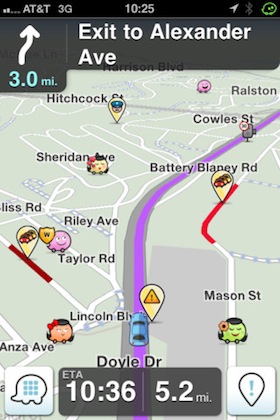 Update #2, Jan. 03: TechCrunch’s MG Siegler just posted a report claiming the rumor of Apple acquiring Waze for up to $750m was little more than a rumor. While citing “multiple sources close to the situation,” Siegler claimed “There is no deal is happening. At least not now or anytime soon.” A little birdie told Cnet the same thing.

Update: Butcher later updated the post to add that another source confirmed Apple is in advanced negotiations with Waze to purchase the company for a figure ranging from $400M to $750M:

Another source confirms that negotiations are advanced, but Waze wants $750M and Apple is willing to do $400M plus $100m in incentives. Waze had less than $1M in revenues last year (primarily from ads). Negotiations may take awhile.

Following rumors that Apple may partner with Foursquare to better its mapping experience, Mike Butcher of TechCrunch offers a great case as to why Apple may purchase social sat-nav smartphone app Waze. For those unfamiliar, Waze is a popular mapping solution in the United Kingdom, Asia, and Middle East (areas where Apple is having trouble with its in-house Maps). Here’s how Apple could benefit:

Because Waze maps are built on the location of moving cars, it’s far more accurate than check-in apps. Outside of Google’s project to map cities with Streetview cars – something which has taken years to complete – and the real-world mapping undertaken by volunteers on the Open Streetmaps open source project, there has been little to match Waze’s approach.

It would also cost Apple northwards of $500M+ to buy Foursquare (which has raised $71 million is known to be raising another round), and gain, what? The location of restaurants, bars and airports? Given Waze has raised $67 million, Apple could acquire far better mapping data and a real driving app.