The 9to5Mac crew just touched down in Las Vegas for CES and to kick things off we have a slew of new products from Griffin, many of which we plan to get our hands on next week during the show.

First off, it’s introducing a new lineup of audio accessories including an updated Lightning version of the Studio Connect interface for iPad it launched last year (full review here). The new version will be available May 2013 for $149.99. We also get Griffin’s new Mic Stand Mount. It is a $39.99 iPad stand that works like a traditional microphone performance stand. Lastly for audio products, Griffin is launching an XLR to 3.5mm mic to bring studio-quality recording to iPads 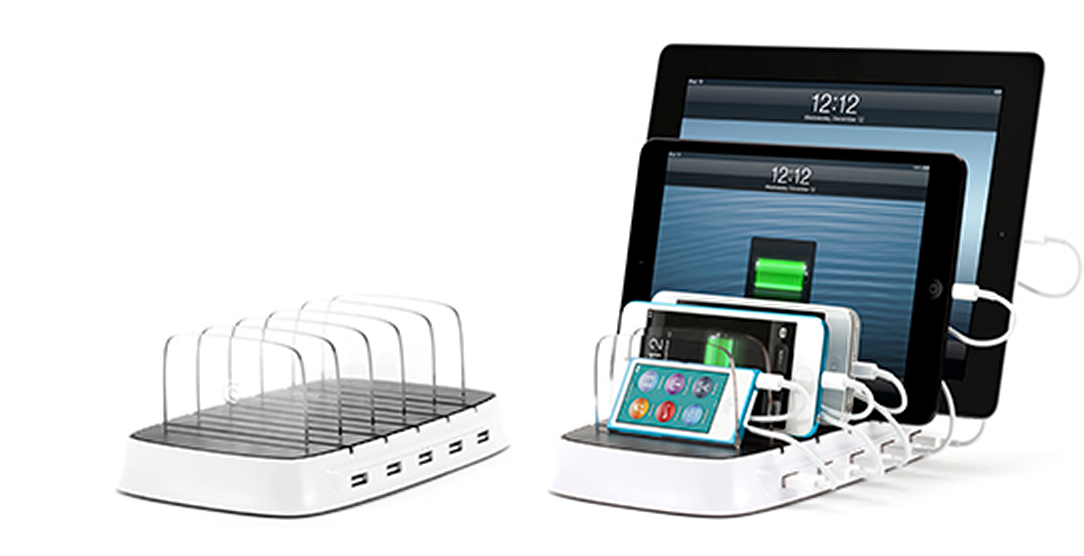 and iPhones (it’s available June 2013, but we hope to bring you a full review of the MicConnect soon).

Pictured to the right is another new accessory Griffin has at CES. The $99.99 charging cradle is known as the Power Dock 5. The dock accommodates iOS devices with cases and holds up to five full-sized iPads. It also launched the new WoodTones headphones made from responsibly harvested Beech, Sapele, and Walnut woods (pictured at top).

Griffin isn’t stopping there, as it is also launching a ton of new iOS accessories aimed at children including a partnership with Crayola to bring a digital stylus shaped like a thick Crayola marker ($29.99 with a free companion app this spring). Other kids’ products include the Crayola Color & Play Workstation. Griffin described it as an “all-in-one iPad workstation that includes a built-in carrying handle and three storage cubbies for their crayons, markers and digital coloring tools like ColorStudio HD and DigiTools.”

The company is also teaming up with Nickelodeon to bring SpongeBob SquarePants, Teenage Mutant Ninja Turtles, and Dora the Explorer themed iOS accessories to market. Finally, it will show off its latest in the children’s KaZoo lineup with “new headphones, iPod touch cases, a charms lanyard kit and kid-friendly AUX cables themed after animals.”